Newly retired Heartland Fire Chief Steve Swaney started off his public comments by congratulating his elected replacement Bent Koch, then switched gears to express his displeasure with the tone of  City Council meetings since Liana LeBaron was elected. Swaney said, “I got to see a hostile work environment created--a toxic environment and a lot of negative rhetoric under the guise of representing the citizens.” When the retired fire chief’s time ran out, LeBaron thanked him for his comment.

When I reached out to Liana LeBaron for comment, she responded, “The Chief's public comment makes sense--given I've publicly criticized the City's mismanagement of public funds to include putting the wants of special interests, such as the fire firefighters, before the needs of the hardworking people of Lemon Grove.”

First on the agenda was a sewer rate study and presentation from city-contracted Harris and Associates, where staff was asked for direction in sewer rate changes.

For residential, there would be no recommendation to change the already established flat rate structure for fiscal year 2023/2024, with a projected 3% increase for all customer classes each year for the following three years through 2028.

Commercial rates were recommended by staff to transition into a flow-based rate structure, divided into three separate commercial classes based on industry standards for the impact these industries have on the sewer system.

Karen Johnson, the representative from Harris and Associates, said that the department has no debt. When asked by LeBaron how much was in the Sanitation Department reserves Johnson replied there are three separate reserves as follows: Capital Reserves $12 million, Operating Reserves at $5 million and Pure Water Project reserves at $6 million equaling $23 million in total Reserves.

Council Member Alysson Snow asked, “Can you give me an estimated cost associated with a study to check the residential flow side of things?” Public Works Director Izzy Murguia replied, “No, it would be a difficult task to give you a number right now,” adding that “doing the residential analysis is not part of their current scope of work”.

The City Council directed staff to move forward in support of a hybrid rate structure and continue with the timeline to fulfill proposition 218 notification requirements.

Also on the agenda was the appointments of Council members to committees, commissions and boards. Recently retired Council member Jerry Jones was kept on the Metro Water Waste Commission.

The staff report states, “There are some important issues the JPA is working on with Pure Water and it is important to keep some institutional knowledge for the coming year.”

When Council was given the opportunity to ask questions, LeBaron asked if a non-elected official was allowed to serve in this capacity and how often does that happen? Several examples were given of instances where that was common on other boards such as MTS and SANDAG.

LeBaron later compared the City’s treatment of her to the historical Lemon Grove Incident, a school racial segregation case dating back to 1931, likening treatment of herself to “the same effort to try to silence and outcast the one Latina that the people chose to represent them” in the Lemon Grove incident. She continued, “This community does not have their seat at the table. if you guys look around, this community is largely Latino."

The appointments to boards passed 4-1 with LeBaron being the only no vote. 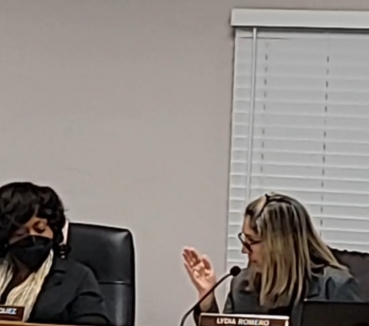 After the meeting, ECM asked the newest elected Council member, Alysson Snow, what her top goals are for her four-year term. She named homelessness, housing, and repairing streets and infrastructure like curbs and sidewalks as priorities.

When asked about what boards or committees she was most excited to be appointed to, she said, “The League of California Cities, so we can have our voice resonate with all of California.”

Metro Wastewater Commission/JPA is a 12 member agency that represents the wastewater agencies that use San Diego’s wastewater treatment facilities. I have been the Chair of the Commission/JPA since 2017. The JPA deals with complex engineering issues, oversight, and relationships between agencies. 2023 looked to see more than half of the more active and knowledgeable members not return for various reasons. That is a huge loss of institutional knowledge. With two water purification projects in progress and planning for a third (Phase 2 of Pure Water) in the works, this is a huge concern. When Mayor Vasquez asked if I would continue to serve as Lemon Grove’s representative and thus the Metro Chair, the decision was not difficult. I should point out that La Mesa appointed former Council Member Baber to Metro the week before my appointment. It should be noted that many regional boards and commissions have representatives that are not in elected office. The Port Commission, Airport Authority, and Water Authority are just three examples of many.
you need educated on how things work