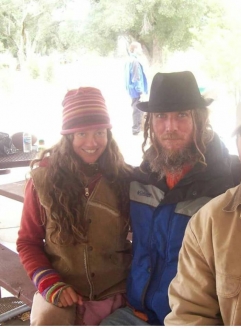 “I’m extremely upset, Leann Mitsui  said,10 News reported late today.”There’s a lot of people that are upset. There’s supposed to be an active search for Jim at this point and there’s not a single person here right now.”

Frustrated that authorities have not organized searches, tonight residents set up a Facebook page called “https://www.facebook.com/events/1813228602242354/.”  (Kyrie’s name was misspelled, friends who provided a photo of the couple have told ECM.)

10 News indicates the Sheriff’s Search and Rescue Team is on the case but neighbors say they haven’t seen adequate searching taking place as yet. 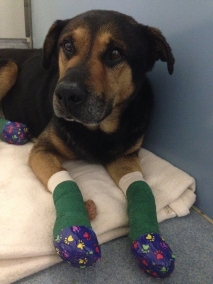 Community members are asking for volunteers to participate in an unofficial  search starting Wednesday at 8 a..m.  The site is littered with hazards, from charred debris and twisted metal to rusted nails and rocky terrain, collapsed structures and the ever present risk of rattlesnakes. Participants are urged to wear boots a

The site is on Highway 94 between Campo and Potrero  just east of Bell Valley at the crest of the hill, on the left if you are heading East from Potrero  or“just east of the burnt down palm tree farm and east of the narrow train subway.” The blue van (photo, above, by Nadin Abbott) is parked in the driveway.

Neighbors voiced anger that not enough has been done. Julie Salmons says she and others have talked to the local sheriff official repeatedly to ask that a search be mounted but that he “flat out refuses  and he refuses with an attitude.”  Others told similar stories.

Still there are some clues suggesting the couple may have made it out of the area. “I spoke with one of the officers that went searching there yesterday,” Katrina Shepherd posted. “He said that Jim’s phone was pinged near Lake Morena, but that was a few days ago.”

"Little Joe,"the rescued dog,is recovering at the County Animal Shelter and is now walking on a leash,Animal Services reported on June 25th. A press release indicated they were trying to locate the dog's owner, but did not mention that the owner and his girlfriend have been missing since the fire.