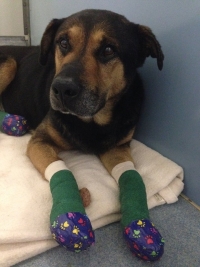 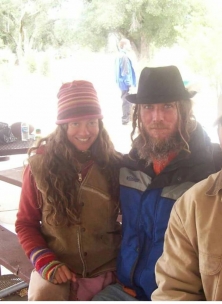 Update:  The Medical Examiner's office has identified the bodies found as Jim and Kyrie Keefe, who died of heat-related injuries.

June 29, 2016 (Potrero) – Two bodies have been found in a rocky crevasse in Potrero by volunteer community members who organized a search this morning, multiple sources have informed East County Magazine.

The bodies were found at a site burned by the Border Fire, 10 days after the blaze began, Reporting San Diego’s Nadin Abbott, first media at the scene, and Deerhorn Valley Antler Editor Kim Hamilton both confirmed.

The bodies have not yet been identified,  but were found during a search for Jim Keefe, known as “Barefoot Jim” and  his wife or girlfriend who neighbors knew as “Kyrie.”   As ECM reported last night, neighbors launched the search themselves, voicing frustration that their repeated efforts to get help from a Sheriff’s official for days failed to lead to a serious search of the property and vicinity.

“Spent 15 minutes and picked up smell,” Hamilton told ECM in an e-mail. “Located bodies on hillside tucked into a pocket in the boulders. Exactly what has ben communicated to sheriffs from the beginning.”

Abbott, who is at the scene and called ECM and said women who found the bodies indicated they were found in a "fetal position" in a rocky crevasse behind the missing couple's home.

A post on a search website on Facebook set up for the missing couple indicated the transmission on their van had died, leaving them without any way to evacuate.

There were plenty of trouble signs.

The site is the location where County Animal Services and 10 News reporter Joe Little rescued a dog with burned paws.  Other dogs initially believed abandoned during evacuation were also rescued, some died, and others are still running loose, neighbors have reported.

"The dogs were running back and forth to where the bodies were found for days," Hamilton posted on the Deerhorn Valley Antler.

Leann Mitsui  has said in posts on social media that she repeatedly asked a Sheriff official to launch search but that he refused to do so. She said when she asked his name, he refused to provide it.  She complained early this morning in a Facebook post shortly before the bodies were found,”Nothing is being done to locate themother than locals putting the word out there that they are missing; officials are treating this as if it is a non emergency…There has been NO ONE THERE.” 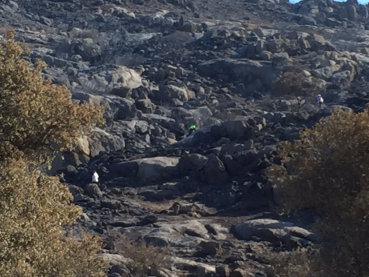 Abbott's report documents anger and frustration voiced by residents at the inaction of authorities,including a deputy who sat idly by even this morning as community volunteers launched their own search in the steep,rugged terrain. (Photo, right,Nadin Abbott, courtesy of Reporting San Diego.)

The County has confirmed that the remains found 70 yards north of 20820 Highway 94, between boulders 50-70 yards from the nearest residence, appear to be those of a male and a female A press statement indicates, "However, due to significant heat injuries, they are not visually identifiable. An autopsy to determine cause and manner of death has yet to be scheduled. Notification of the next of kin is pending the identification process, which may take several days."

The Sheriff's department issued a statement noting that the address was under mandatory evacuation June 19 when the fire started.  However the Keefes may have been unable to evacuate due to the transmission breakdown in their van.

It is unclear whether they ever received any evacuation notification since land lines,cell phones and internet service were all down in Potrero. Jan Hedlun, a Potrero planning group member, has told ECM she did not hear any efforts to notify Potrero residents of evacuations via bullhorns, as was done later in some other communities.

The Sheriff's press relaese states that a "deputy from the Campo Sheriff's Substation was first notified about the couple possibly missing on Sunday, June 26th. The concerned citizen had no information on the address of the couple or their names The next day (June 27th) Red Cross provided a deputy with the couple's address. The deputy immediately opened a missing person's report and searched the property with CAL FIRE (California Department of Forestry and Fire Protection) personnel. They searched five structures, two vehicles, a trailer and the grounds, but did not locate the missing couple. As part of a missing person investigation, deputies also searched local hospitals and jails for the couple. The couple was entered into a national missing persons database."

The release continues, "On Tuesday, June 28th, Sheriff's Bomb/Arson along with CAL FIRE continued the search on the property. Sheriff's Search and Rescue (SAR) was scheduled to send a search dog, but it was diverted to Valley Center for a missing person at risk. On Wednesday morning, June 29th Search and Rescue was planning to undertake a more comprehensive search and was meeting with deputies regarding the search area when local residents who launched their own search found the remains."

It is unclear why  it took a missing persons report for law enforcement and fire authorities to recognize the need to search the property and surrounding areas, given that multiple dogs had been found without care on the burned-out property, residents reported a strong stench, and vultures were visible above the scene.

A memorial fund, which also aims to care for the couple's dogs, has been established here: https://www.gofundme.com/2c2et997