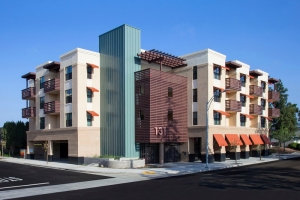 September 22, 2017 (El Cajon) -- The El Cajon City Council faced some new concerns at its Tuesday, Sept. 12 meeting when attention was directed to Solterra, an apartment project built by a partnership of both Affirmed Housing and the City of El Cajon some five years ago. The complex, located at 131-155 Chambers Street near W. Main Street, is a 49-unit, senior affordable community offering one-and-two bedroom apartments to seniors ages 55 and up who earn 30-60% of area media income (AMI).

While the relatively new complex has many amenities available to residents and has incorporated many “green” energy features such as solar panels for electricity generation, energy-efficient appliances and plumbing, residents of the complex have developed major concerns regarding upkeep of the building and security issues. These concerns were originally brought to the attention of the El Cajon City Council by residents of the complex on July 25, 2017.

According to El Cajon City Manager Doug Wiliford, following verbal testimony given by residents at the July 25 meeting, he later received a more detailed list of resident complaints and concerns. That resulted in the city visiting the property regarding code compliance work and a subsequent meeting with Solari Enterprises, the complex’s property manager and the building’s owner.

“Because the city has a financial interest in this project going back since the property’s development, we brought to the attention of the management group our expectations,” Williford said. “They returned the following week with an action plan that included things such as fire code violations, a television set for the community room, that they order cable TV for that set, cleaning out the garden. More importantly, they will schedule monthly socials and regular meetings with the residents. We will make sure that these things are implemented,” he continued.

In spite of the planned improvements and follow up visits, one resident, Debra Brauner, voiced her concern to the Council that much more needs to be done at the complex about general building security, and said that there was still a general mistrust between the residents and the management. “We get told about a lot of things that never happen or there are a lot of things that just aren’t true that they report back to us,” she said. She said that a damaged security door was allowing “druggies and homeless to use the basement garage for lewd acts….Until recently, that hole so they could reach in to turn the knob didn’t get repaired.” Braun added, “There are many incidents that we have to fight off the homeless and the druggies. I really hope we get a security guard back.”

In a response to Brauner’s claims, Mayor Bill Wells encouraged Brauner to bring her concerns directly to the complex’s management and for Solari’s representative to the City of El Cajon address her concerns with the City Manager. “This is a work in process situation. Let’s keep working together,” Wells said.

Williford interjected during the discussion that the issue of security has been addressed by the City to the management firm and the property owners. “They know that we know and that it is an issue. We have given them some flexibility in dealing with this issue.“  If that fails, Wells said, “We have a lot of options on how to deal with these problems.”

“We are in a unique position to deal with this complex. If it were different where the City didn’t have a financial interest, things would be a lot different,” Wells said to ECM after the Council session.

Councilmember Ben Kalasho asked the mayor whether it would be possible for the Solterra management team and owners be able to directly answer questions from the Council members. “It is obvious that we can’t force them to do so. It is a conversation that we would have from the dais, rather from the podium [that] would be a lot different,” he said. “I feel it is easier for them to write things rather than face the full City Council.”

Also at last Tuesday’s meeting, the City Council accepted what was termed “a generous offer” from the Rotary Club of El Cajon of a high visibility four-faced outdoor clock that would be installed in a prominent place in downtown El Cajon.

Other business that was considered by the City Council was a consent item that would authorize the City Manager to negotiate and execute an amendment which would increase the amount of funds not -to-exceed amount to $217,840 as needed for the continuing construction observation and inspection services for the El Cajon Animal Shelter Project.

Councilmember Kalasho objected to the amendment saying that the services should be put out for a new competitive Request for Proposal. It was further discussed that putting out a new Request For Proposal could end up not only delaying the finishing of the project, but could end up costing more because of a market-driven situation, given new competition for building materials in light of the recent damaging hurricanes in the Southeast region of the United States.