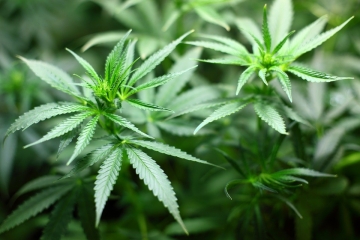 January 28, 2018 (El Cajon) -- When California voters approved Proposition 64 legalizing the recreational use and cultivation of marijuana, voters also approved a less publicized part of the proposition which allows individual cities and counties to regulate where it can be bought and cultivated.

A group of unnamed citizens under the moniker “El Cajon Residents for Responsible Governance” in December filed a legal Writ of Mandate with the San Diego Superior Court requesting an immediate stay of El Cajon’s marijuana sales and cultivation ordinance.  The writ claims that the ordinance approved by the City Council in October, is punitive.

(A writ of mandate, as opposed to a full-on lawsuit, is a court order to a government agency or another court to correct its previous illegal behavior in order to comply with the law.)

While the City of El Cajon has welcomed several new large businesses and car dealerships in the past several years, it has never been a “pot-friendly zone” for marijuana dispensaries. Although dispensaries have been banned since October 2010, the City considerably toughened its stance in January 2016 when the City Council specifically voted to prohibit any type of marijuana cultivation, distribution by mobile marijuana dispensaries and other marijuana delivery services, and marijuana storage. El Cajon has also gone as far to prohibit the manufacturing of marijuana products such as edibles and lotions within its city limits.

The writ, filed by La Jolla attorney James Finegan, specifically cites the action of the El Cajon City Council on October 10th, 2017 when the Council unanimously hiked up fines on code-violating pot dispensaries to $2,500 per day per violation, starting with the first citation. Previously, fines ranged from $300 to $500 per day. Finegan thinks this sharp increase in fines is onerous and punitive.

“El Cajon, I believe, is the most restrictive ‘regulatory’ scheme in that it completely bans any commercial activity. El Cajon would also be the most punitive in that they made it a misdemeanor to violate their municipality's zoning laws,” Finegan says.

He adds, “Reasonable regulations would be fair.” Those would include requiring a certain distance from sensitive locations such as schools, churches, or rehabilitation facilities. The city could also limit the total number of licenses it believes consistent with the general design of the city, it may impose a permit or license fee, Finegan suggests.

The group of unnamed individuals behind the legal action has filed paperwork as a “mutual-benefit nonprofit,” a type of nonprofit corporation that works for the betterment of a select group of members, rather than for the benefit of the public. Finegan refused to identify the individual members of the group due to fear of what he characterized as “intimidation.”  He cites the same reason for why members of the group did not offer public comment at the time of the City Council’s October 2017 vote, where numerous individuals from the East County Transitional Living Center unanimously spoke in favor of the ordinance.

Although Finegan is confident that he will prevail in the case, San Diego attorney Michael Cindrich predicts the City will likely win. Cindrich started his law career with the San Diego County District Attorney office as a prosecutor and then literally switched sides; he is now a criminal defense attorney who specializes in marijuana law cases.

Cindrich says the biggest stumbling block in Finegan’s case is that Proposition 64 clearly has a provision that allows local governments to enforce state laws and regulations for non-medical marijuana business and enact additional local requirements for these establishments.

“Cities and counties are able to flat out ban cannabis-related activities. I believe that when people voted for Prop. 64 they knew that cities and counties could ban these kinds of activities,” Cindrich says. “Based on all of the laws I’ve seen on this subject and my familiarity of Prop. 64, it is likely going to go against the petitioner.”

Cindrich also cited a 2014 California Supreme Court case involving the City of Riverside vs. Inland Empire Patients Health and Wellness Center, Inc., where the Court upheld Riverside County’s local zoning ban on medical marijuana dispensaries. As well, the California Constitution (Art. XI, para. 7) recognizes and spells out the authority of cities and counties to make and enforce within their borders, “all local, police, sanitary, and other ordinances and regulations not in conflict with general laws.”

Another provision in Prop. 64 allows local governments “to reasonably regulate the cultivation of nonmedical marijuana for personal use by adults 21 years and older through zoning and other laws” and only to ban outdoor cultivation as set by the proposition.

While use of medical marijuana has been allowed in California for over a decade by an earlier proposition and recreational use just became legal after voters approved Proposition 64, all marijuana use and activities remain prohibited under federal law.

Emphasizing that point, U.S. Attorney General Jeff Sessions recently decided to rescind the Obama administration’s guidelines, which had instructed the Justice Department to take a hands-off approach in states that had legalized medical or recreational marijuana. Such a lax enforcement approach may have been the impetus for Proposition 64 to be filed in the first place.

After a hearing that took place in December, the court will consider the full motion filed by El Cajon Residents for Responsible Governance at a March hearing.

A statement released by the El Cajon City Attorney Morgan Foley says in part that, “the City is vigorously opposing the petition, and has from the start. Immediately upon being served with the petition the City filed a preliminary opposition. Following that the petitioner set an ex parte hearing seeking an order to show cause, which would shift the burden to the City to justify its actions taken in adopting the legislation. The court denied issuing an order to show cause to the City, and we have now filed our own responsive pleading, a demurrer to the petition. …Our position is that none of the state's laws related to cannabis preempt our ban on marijuana dispensaries; that the California Supreme Court has confirmed this right of local control; and, in fact, Proposition 64, by its own language provides that local jurisdictions retain our land use rights to regulate and even ban such uses in our communities.”

Finegan will face off with the City of El Cajon in February for a hearing on the demurrer and on the actual motion in March.

Thank you. The dispensary located at Gillespie field (outliersco.com) could be shut down by 2020 though, if I'm understanding correctly what Paul Kruze wrote in the article: "The county will sunset ones in unincorporated areas". I'd like to know the reason why this may happen. Is it a decision by the San Diego county supervisors, or elected officials in El Cajon? The legalization of marijuana for recreational use has so many restrictions, it does not reflect what many of us though we were voting on.Obviously the fine print will need to be analyzed in future propaganda.One of the saddest parts of our modern day government system is that it does not truly reflect what we, the voters want. This is becoming more obvious to me as I age, as we become more controlled by government leaders, beginning with the president of the United States and filtering down to each city. Good article Mr. Kruze :-)

after some court ruling elsewhere led them to believe they can do this. They gave Outliers near Gillespie Field, which is in the unincorporated area, and another in Ramona alraedy approved five years to turn a profit and shut down, since they were legally licensed.

There has been no problem at all with the Outliers dispensary; the Sheriff confirmed there have been no break-ins or any other crime there at all, other than one attempted break-in that was foiled when Outliers called 911.  By contrast, crime is rampant at the illegal dispensaries that have had break-ins not reported, assaults, shootings, theft of utilities by the dispensaries themselves, etc.

However, most of the current Supervisors will soon be gone due to term limits. The marijuana industry has indicated it will be backing candidates who will support legalization of dispensaries and/or other cananbis related businesses, and they have a lot of money to pour into the supervisorial races.  It's quite likely that the sunset provision will be repealed before it takes effect.

I've never understood the hysteria around marijuana for medical use.  Sure, there are some who may use it as a gateway drug (such as some who wound up at the ECTLC) , just as some start with a bottle of beer and graduate to becoming hard core alcoholics.  But we don't ban all alcohol sales for everyone and Prohibition proved that didn't work. We don't ban cars because some speed in them.

Fact:  states that have legalized marijuana saw opioid deaths drop sharply - as much as 60% in some places.  While not harmless, it is far safer than opioid addiction which is a crisis across America. As long as narcotics prescriptions are readily available, a prescription for marijuana would seem a less harmful alternative for people with chronic pain and it's beneficial for other things such as easing nausea from chemotherapy and helping with glaucoma.

On the other hand, El Cajon has seen some abusive illegal pot operations that did dangerous things like sttoring cannisters of gasoline on a roof in the sunlight - vrey dangerous as it could explode. The city went to the extreme of banning all operations.

There can be a reaonable medium between legalizing all marijuana operations and banning everything.

I do know that at the county's only legal dispensary near Gillespie Field, there has not been a single robbery or other crime there in the several years it's been open.  If you really want to cut down on illegal operations, giving them competition from a limited number of legally licensed and tightly regulated faciliites is one way to do that.

Marijuana is going to be around and used in one fashion or another by many who wish to imbibe in the product either for medical purposes or recreational. This is a fact which has been around for generations, and cannot be stopped. I feel that the El Cajon city leaders are grossly mislead as to the effects of marijuana consumption, and could have been unduly led to enacting such tough, restrictive ordinances by a select few against against prop 64. For example, the clients at East County Transitional Living Center. Should these individuals have been allowed to possibly influence the city council and mayor to ultimately quash prop 64? Were they coerced to speak out? I ask this because there could have been a potential conflict of interest in this considering the fact that the rehabilitation facility receives tens of thousands of dollars each year for it's operation. Something to investigate? In the end, marijuana production, sales and consumption will continue by the masses and the city of El Cajon will not benefit in collecting a possible huge windfall of much needed tax revenue plus more. Thus the underground 'criminal' activity remains the benefactor of profits.Yet alcohol (once prohibited) which causes many problems in society and has serious medical effects on the human body as well as the mind, continues to thrive in sales. Every time I look around, a new business in El Cajon applies for and is ultimately approved a license to sell a product that causes havoc in modern society - just as it once did in the past. Ask yourself this: why is alcohol accepted more easily than marijuana when its affects are in my opinion (studies confirm this), far worse?