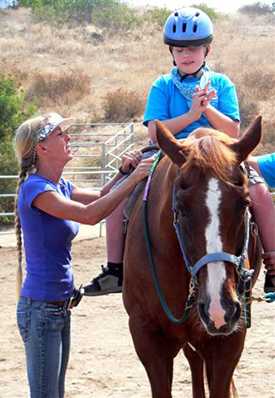 Avery Titus rides tall in the saddle at The Magic Horse, guided by riding therapist/founder Robin Pawl. Before, he could not sit up on his own.

September 2008 (Lakeside)--Ten-year-old Avery Titus squeals with delight, pressing his face against the sun-warmed backside of Iggy, a quarterhorse at the Magic Horse Therapeutic Riding program in Lakeside.

"Before, he couldn't sit up on his own," recalled Avery's father, Clay. "Now he can sit and not fall over."

Avery has cerebral palsy, brain damage and learning disabilities. But his older brother, Chandler, observed, "That doesn't stop him from being this happy kid."

Magic Horse founder Robin Pawl has Avery demonstrate the exercises he's learned to do on horseback. Motions of the horse beneath him simulate pelvic movement, helping Avery to improve his coordination skills, strengthen his back muscles and improve his sense of balance.

"Reach for the stars!" instructs Pawl, as her pupil extends his arms skyward. Pawl walks on one side of the horse, Avery's father on the other side. Anna Gahagen, a volunteer, leads the horse with a rope in front. Avery leans over to retrieve a stuffed alligator from a mailbox and plastic rings off a pole.

Using handles on a vaulting sursingle (a soft saddle substitute), Avery swings his legs into a sidesaddle position, aided by his instructor. Later, he shifts seating again to ride backwards. 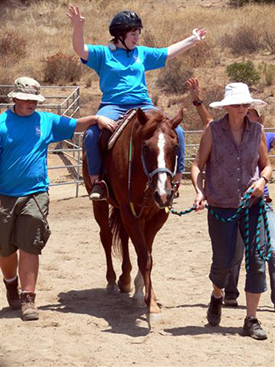 Like many disabled children, Avery missed key developmental stages. "He never walked or crawled. He will scoot, like a combat crawl upright," said Avery's Dad. Riding therapy helps Avery use core muscles to build strength and coordination. Lessons also help children with proprioception, the concept of knowing where one's body is in space.

"If the brain doesn't develop, we try to develop new pathways," said Pawl, a therapeutic riding instructor certified through NAHRA, the North American Riding for the Handicapped Association, which provides referrals to therapeutic riding programs worldwide. Pawl is also a certified fitness trainer and life coach with a bachelor's of science degree in biology. "I use all of those things together here," she said.

At lesson's end, Avery uses his own form of sign language to signal Robin to open the gate. Communication, courtesy and cooperation are also taught here.

Avery has been riding horses for seven years. His father did research on the Internet and first enrolled Avery in a hippotherapy program, working with a licensed hippotherapist in a horseback program for several disabled youngsters. Avery's skills improved, but the center where he'd received help stopped its children's programs. So Avery came to the Magic Horse two years ago, driving all the way from their home in Carmel Valley.

Nine-year-old Lauren Heim of Rancho San Diego has also been a student at the Magic Horse for two years. She has Kabuki syndrome, which caused developmental delays and low muscle tone.

"Riding horses is great because it strengthens up her muscle tone and especially her trunk," said Lauren's Dad, Mike Heim. "Before, she could walk but was prone to falling a lot. She's made a lot of progress. They use a lot of fine motor skills here--taking up the reins, putting on the tack. Now she is able to buckle up the harness and put the reins on the horse...Once her family saw how much she could do here, they started having her do more at home, too. I try not to put limitations...We strive for as much independence as possible."

Hoisting a tool box, Lauren rushes to the corral, where she reaches on tiptoe to brush the mane, back and sides of Clem, an Appaloosa. Next she demonstrates her ability to put a blanker, riser (foam pad to raise the back of the saddle), saddle, girth, and reins on the horse.

"She's even starting to ride off lead with nobody touching the rope now," said Pawl. "Lauren used to be afraid of merry-go-round horses. Now she'™s pretty fearless."During today's riding session, Lauren walks and trots the horse, performs the helicopter (extending arms out and twisting her torso) rings a bell and is later rewarded with a short trail ride. "Walk on!" she commands with the mastery of a seasoned equestrienne.

"We can go up and down hills and into the brush, looking at native plants, animals and butterflies," said Pawl, pointing out wild Indian tobacco growing alongside the trail.

The next rider is 13-year-old Laurel Mackey from Lemon Grove, who has been enrolled in the program for a year. Laurel has epilepsy and other complications as a result of chemotherapy for leukemia when she was two years old. To overcome the cancer, she underwent 18 spinal taps. (New protocols since then have made chemotherapy much safer for young patients.)

Laurel used to play soccer, but had to give up the sport because she suffered repeated seizures.

Trained in first aid, CPR and emergency procedures, Pawl learned how to run a special magnet across the vagal nerve stimulator in Laurel's chest and made sure everyone in the ring knows what to do if Laurel should ever have a seizure while riding.

Like many kids, Laurel was initially afraid of large horses. So she started out on a low barrel vault "horse" covered with carpet and a tail.

"She's a lot more confident now," said Laurel's mother, Shelley. "It gives her something to talk about at school. This is her sport. She takes pictures to school and her friends all think it's great."

Mounted astride the horse, Laurel tosses a ball to her brother, Bryan, who volunteers as side walker for her lesson.

During a recent show held for students of The Magic Horse, Laurel maneuvered the horse through an obstacle course, guided the horse backwards, and showed off hands-free movements. "She got to perform in front of a lot of people, and there was a lot of applause," her mother said. "This has been the best program, and it's also helped my son learn to work with horses."

Riding therapy, which generally is not covered by medical insurance, costs $30 for a one-hour lesson, or $120 to $150 a month.

"People can contribute to a scholarship program or sponsor a rider," said Pawl. "For $300, a rider can get 10 lessons--a good amount to learn something. For $3,000 you can sponsor a horse for a year (excluding veterinary costs).

Ultimately she hopes to convert the business to a nonprofit organization so that donations can be tax deductible. She is looking for a lawyer and accountant who can help her take that step, and also seeks more volunteers to work with children and horses in the program. No experience is necessary for volunteers, who learn about horsemanship, horse behavior, basic riding skills and disabilities.

Anna Gahagen, who describes herself as an "old autistic," found an unexpected benefit from volunteering in the program. "The horses help keep me calm," she wrote in a note posted in a rest area for riders and their families.

"It's a positive experience," concluded Pawl, who takes pride in helping children at The Magic Horse. "They have fun, and a lot of times they surprise you. My job is to stay one step ahead of them."

secured with help from the Heartland Foundation, East County Magazine's fiscal sponsor!  You can find all about their wonderful new facility at their website:

I received an e-mail from Robin informing me that the owner of the property has made plans to develop the land where Magic Horse is currently located.

She seeks land to relocate the Magic Horse program. If you can help, contact robinpawl@nethere.com.