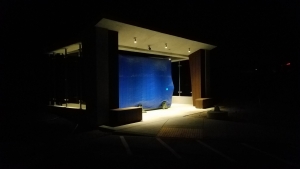 Update September 29, 2017 :  Jorgina Soto, San DIego County Library, advises that a soft ribbon cutting is now scheduled for October 16th, with a ribbon cutting slated for early December at a date to be arranged.

Photo:  The San Diego County Library’s new and shiny library kiosk sits in the dark with a heavy cover until further notice.

September 22, 2017 (Boulevard) -- It is back to the drawing board for San Diego County Library officials, who had intended to debut a 24/7 automated library kiosk in front of the old Boulevard fire station at 39923 Ribbonwood in September. But due to unforeseen circumstances, a heavy cover will remain on the kiosk and residents are going to have to wait at least until mid-December before it will be operational.

While the kinks in the advanced technology used by the kiosks have been all worked out, it is the extreme weather conditions in Boulevard was one thing that library officials didn’t count on having to contend with. It turns out that in spite of the stylish shelter which surrounds the kiosk, sun hitting the kiosk during the day make it too hot to touch or even come close to it. Not only that, the amount of dust which ends up being blown and whipped up by Santa Ana winds end up inside of the kiosk and gums up the works.

The San Diego County Library operates the $300,000 kiosks throughout San Diego, allowing users to check out and return books.  Not only that, patrons will also be able browse through around 340 books and movies in stock, checkout materials, return books borrowed from any county library, reserve books throughout the library system’s catalog and pay fines on materials. The kiosks also double as Wi-Fi hot spots and allow anyone nearby with a library card and laptop to go online.

Librarians use dedicated software system to pick what materials are likely to be popular at the different kiosks. A kiosk in Kearny Mesa contains about two-thirds DVDs, while the remaining collection are books and audio books. Kiosks in other San Diego County location have a different mix of materials.

The San Diego County Library will be hosting a grand opening event when the heat and dust problems are resolved.