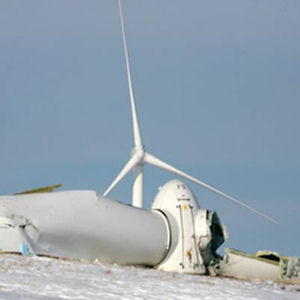 September 12, 2012 (San Diego's East County) -- Iberdrola Renewables states on its website that “Iberdrola strives to offer its energy supply and to carry out the other activities undertaken by the Group within a safe and reliable environment.”  But a look at the history of turbine collapses, serious injury, fires, safety violations and at least one death linked to Iberdrola facilities raise serious concerns about the company’s track record.

Despite these dangerous incidents, Iberdrola has been approved by the federal and county governments to install wind turbines at its Tule Wind project in McCain Valley.

Some turbines will be just 455 feet from roads and 760 feet from public campgrounds, according to an Iberdrola interview with ECM.  Each turbine will be roughly 450 feet tall with blade spans the size of football fields.

A new wind turbine rotor and blades fell off and crashed to the ground at a wind facility owned by Iberdrola in Rugby, North Dakota in March 2011, the Bismarck Tribune reported.  The turbines were built by Suzlon Wind Company, a unit of Suzlon Energy Ltd. In India.  A state regulator blamed the accident on bolt failure.

Aaron McCoy, a worker at Iberdrola’s Cayuga Ridge wind farm in Illinois, suffered third degree burns while installing a Gamesa turbine and another employee activated the power source.  He has filed a suit against both Iberdrola and Gamesa.

In 2008, a worker fell to his death and a second man seriously injured when a turbine collapsed at the Klamath III wind facility in Oregon. The project was owned by PPM Energy at the time but is now owned by Iberdrola.  Iberdrola lists Klamath III on its webpage , touting “hundreds of jobs created” but interestingly a link for details on the project is not working.

The turbine, built by Siemens, buckled halfway up from the base, then collapsed to the ground. View photos: http://www.komonews.com/news/local/9383316.html  Siemens, which manufacturers the turbines now being installed at Ocotillo Express Wind, was fined $10,000 by OSHA for a safety violation.

A wind turbine at Iberdrola’s Barton 2 Wind Power Project in Iowa, caught fire in May 2012,   North American Windpower reported.  Iberdrola In a December 2011 article titled “Iberdrola and Games bolster wind power ties” , Business Green reported that Iberdrola has announced that it will purchase at least half of the wind turbines it requires between 2013 and 2022 from Gamesa.   Iberdrola further controls 19.6% of Gamesa’s shares and has forced management change at the company according to a Financial Times story.

Gamesa turbines have also been linked to numerous fires including two turbine fires in Pennsylvania, including Iberdrola’s Locust Ridge project in 2009 and another fire at North Allegheny Ridge (not owned by Iberdrola) in 2012.

Iberdrola previously had issues with Gamesa turbine blades whirling off chunks of turbine debris at the same facility. ECM has previously reported on these issues and other turbine safety concerns  in an April 4, 2012 report, “The Dark Side of Green.”

Gamesa also built blades that blew apart in a storm at the Kumeyaay Wind Farm in Campo, built by Pattern Energy’s predecessor, Babcock and Brown.  Litigation continues over the catastrophic failure, which led to replacement of blades on every turbine and the wind farm forced to shut down for several months:  http://www.rechargenews.com/energy/wind/article294834.ece

Pattern listed the Campo project as a “success story” in SDG&E’s application with the CPUC for the Ocotillo Express wind in Imperial County, now being built by Pattern.

We have camped at Cottonwood Campground in McCain Valley for decades while hiking the area.   We saw the damage the storm did to the Kumeyaay Wind Farm that took THREE MONTHS to repair.   Obviously, NO ENERGY was being produced by any of the 25 wind turbines during that time, and the large parts from those "green" wind turbines that were replaced still litter the ground there.

Why put people like us who come out to McCain Valley to enjoy the beauty of nature and use the PUBLIC campground, scenic overlooks, and hiking trails which are made for that very purpose in DANGER by placing wind turbines as tall as skyscrapers so close to the PUBLIC areas we use?   Also, McCain Valley Road is the ONLY road in and out from remote Cottonwood Campground.

Rooftop solar is the sensible "green" alternative renewable energy that doesn't put lives in DANGER or WASTE our taxpayer money.