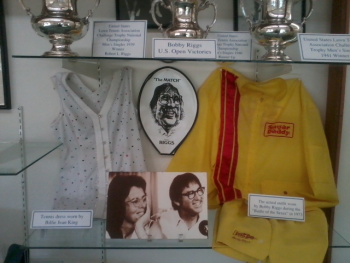 This match pitted women’s then number two ranked Margaret Court against 55-year old tennis Hall of Famer, hustler and gambler, and self-proclaimed “king of male chauvinist pigs” during the women’s liberation movement, Bobby Riggs.  But it was not Margaret Court that Bobby wanted to play. Billie Jean King, who had recently led eight other female pros known as the “Original 9” in the establishment of the first women’s professional tennis tour called the Virginia Slims, was arguing “equal pay for equal play.” 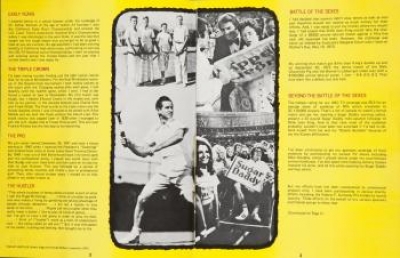 Coupled with Bobby’s desire to be always in the spotlight, he had waived a $ 5,000 cashier’s check in the air a couple of months earlier at the ritzy Westgate Hotel, where he challenged Billie Jean to a winner-take-all match to prove that even the best female player in the world could not beat a middle-aged man.

Billie Jean avoided Bobby’s overtures, but Margaret Court, who has won more Grand Slam titles (24) than any player in history and who was not one of the Original 9, and likewise not making very much money playing tennis despite her lofty ranking, negotiated Bobby’s offer up to $ 10,000, and the match was set in this remote setting of vacant lots.  The choice of this odd location was the stroke of genius of Tony Trabert, former tennis champion and in 1973 the initial director of tennis operations at Mr. Watt’s fledgling development.

I knew all about these events, because when I was in high school in 1973, I was Bobby Riggs’s scrapbook maker.  I got this job, at age 14, because my father’s only sibling, my Auntie Bun, had married John Riggs, one of Bobby’s older brothers.  I wound up creating eleven scrapbooks, on 11 by 17 paper, that consist of over 2,500 pages and more than 250 pages of hand-typed indices…that’s how much of a media frenzy this series of events caused.

In front of 3,500 live spectators (at most), and perhaps 10 million TV viewers (announced by CBS’s Pat Summerall), Bobby Riggs spun, lobbed, and sliced the serve-and-volley expert Margaret Court into a 6-2, 6-1 resounding defeat.  John Wayne handed Bobby the winner’s check.  Appearing thereafter on the covers of Time and Sports Illustrated, Bobby had backed up his outrageous comments that “a women’s place is in the kitchen and the bedroom- and not necessarily in that order.”

Billie Jean could avoid Bobby no longer, unless she wanted to stop proclaiming that the women players should be paid the same as the men.  Just over four months later, in the second “Battle of the Sexes,” this time at the Houston Astrodome, Billie Jean reversed the result with a 6-4, 6-3, 6-3 defeat of Bobby, who proceeded to lock himself in the bathroom of his hotel room for four hours after his embarrassing defeat.

This second “Battle of the Sexes” far surpassed the first in every way:  30,472 live audience (v. 3,500 at most), 90 million TV viewers compared to 10 million, and a $ 100,000 “winner take all” purse (as opposed to $ 10,000).  These results were because of the involvement of marketing genius Jerry Perenchio, then Norman Lear’s production partner on such hit TV shows as “Maude” and “All in the Family.”

But what was really behind these statistics?  The second Battle of the Sexes was the first-ever sporting match where women comprised a large percentage of the viewership:  mothers and daughters and grandmothers and girlfriends.

You see, 1973 was an amazing year in our nation’s history, a year of great upheaval and change.  We witnessed the end of the Vietnam War, the start of Watergate, the first OPEC oil embargo, and the Supreme Court’s resolution of Rowe v. Wade.  1973 also saw the first efforts at the implementation of 1972’s historic equal-participation legislation known as Title IX.

The women’s liberation movement was in full force.  Mary Tyler Moore starred on TV as Mary Richards, a single TV executive making it in the business world as something other than a nurse or a schoolteacher, without a husband by her side.  Helen Reddy sang “I am Woman.”  The Boston Marathon had allowed women to enter and run for the first time ever, just one year earlier.  Also in 1972, Ann Meyers (now Drysdale) became the first women to receive an athletic scholarship from a US university (UCLA). And in 1973, Little League was forced by the courts to allow girls to play baseball with the boys.

Of trivial note, Margaret Court re-ascended over Billie Jean later in 1973 to reclaim the number one world ranking (Margaret also dominated Billie Jean in head to head lifetime matches, by a 21 to 13 count). The Riggs v. Court match became known as “The Mother’s Day Massacre.” Bobby Riggs wound up buying a vacation home at San Vicente.  My parents wound up buying a timeshare there.

Billie Jean King went on to become a great voice not only for women’s liberation, but also for gay rights. She was a Presidential Medal of Freedom winner in 2009. Margaret Court did not believe in either movement, not in 1973 and not to this day, where she hosts a very popular TV ministry show in her native Australia that is ultra-conservative.

If Margaret Court had defeated Bobby Riggs on Mother’s Day of 1973, the second and more famous match against Billie Jean King never would have happened.  There would have been no reason to play the second match.  And Margaret Court was never going to be the voice of women’s liberation, because she did not believe in this cause.  As Bobby Riggs’ scrapbook maker, I argue that these implications make the first Battle of the Sexes match even more important than the second.

However, the second match significantly overshadowed the first in its media coverage, and thus The Mother’s Day Massacre is relegated to being a distant memory, if remembered at all.  But it is the remembrance of events like The Mother’s Day Massacre that allow us to connect the dots, to understand where we came from (however remote) to where we now find ourselves today, where Bobby Riggs’s scrapbook maker is now the father of two daughters, and one son…and where in 2013 all three of my children, not just my son,  can become whoever and whatever they want to be.

Richard Muscio is the founder of the Move Your Feet Before You Eat Foundation and the Oceanside Turkey Trot.  His book “So, What’s Your Play?  How Billie Jean, Bobby and Blindness Begat Tolerance” will be released by Sherpa Press in early summer.   Richard appears on 760 KFMB every Sunday night with Joe Vecchio on "It's Your Money and Your Life" from 7-8pm.  All commercial-free podcasts can be heard at www.IYMoney.com.