October 13, 2010 (La Mesa)—While the La Mesa Spring Valley School District faces the struggle of an ongoing budget crisis, three incumbents and one challenger compete for the opportunity to incorporate their suggestions on how to provide the best education for students and support for employees with limited financial resources.

“We have pretty much spent all our restricted funds down to the bone,” Assistant Superintendent of Business David Yoshihara said recently to the San Diego Union Tribune.

Yoshihara said after the 2009-10 fiscal year, $8.6 million is left available in total reserves for the district and $7.4 million leftover in unrestricted reserves, which can be used for anything unlike restricted reserves which may only be used to pay for predetermined items.

Incumbents Rick Winet, Penny Halgren and Bob Duff as well as challenger Jay Steiger all agree that much of their attention should be focused on how to properly manage the budget. Steiger said the budget is the issue from which all other issues spring. Some districts issue teacher layoffs in March because they have to, and then they pull them back, Steiger said. “But this district unfortunately has been forced to actually execute many of those layoffs and release some teachers that were great assets to this district.” 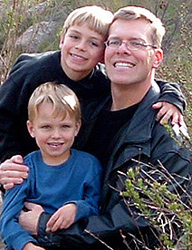 “Teachers, staff and administrators have all taken salary cuts and furlough days, and we’ve reduced the school year by five days, which I think is very sad,” Steiger said.

Having served on the La Mesa City Budget Review Committee, Winet said, “The single greatest issue that we face is to be able to continue to deliver public education—and the good product that we do deliver—with dwindling resources.”

Winet plans to continue to see through the ideas he produced two years ago with the district. “Every employee in our school district two years ago took an equal percentage compensation reduction, if you will, in order to save jobs. And we were able to make the same thing happen with a similar type of reduction in the past year,” Winet said. “I plan on building on the good will and the sacrificing that we have done as a whole, as a district, to try to continue to preserve the product.” 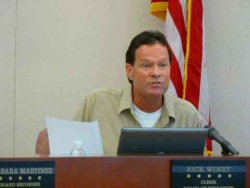 Winet was elected in 1998 and has been a board member for the last 12 years. He has served as the president of the board twice and says that with the way the board presidency rotates, he would serve as the president again this coming year. Winet’s community experience includes having served as chairman and board director of the Better Business Bureau of San Diego County as well as for Junior Achievement of San Diego County.

“Ninety percent of all revenue that the district has is spent on salaries and benefits for employees. And we have very little wiggle room, if you will,” Winet said. “That other 10 percent is for keeping the lights on, the energy and all other kinds of costs that are associated with funding the school district.”

Halgren also agrees that employees are the biggest expenditures for the district. “There will be challenges working with employee associations and keeping class sizes as low as we possibly can,” Halgren said. “It is really a matter of setting priorities, defining what’s important to the district and making sure that the money is spent in the best possible way.” 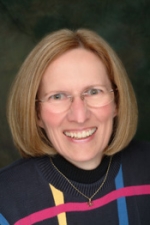 Halgren has a bachelor’s and master’s degree in finance and business economics. She has served as a financial analyst in the Strategic Planning department of San Diego County for five years and she feels that there is a great deal of benefit in having a board member who can provide expertise in the financial area.

As a retired teacher, counselor and administrator, Duff feels that it is in the best interest of the teachers if they had a representative on the board “that could empathize with the conditions a teacher faces when class sizes are elevated or salaries reduced.”

“I know the conditions that exist in the classroom,” Duff said. “My fundamental priority is to fully fund teacher salaries and retain as many teachers as the budget and our state will provide while still maintaining a safe educational environment.”

Duff was elected to the LMSV School District Governing Board in 2004. He has a bachelor’s degree in industrial education, a master’s degree in special education and has spent 38 years serving in education.

Halgren has also expressed that keeping the district solvent and keeping teacher morale up is a challenge when continually faced with limited resources. With the protection of teachers in mind, Duff recommends “close scrutiny of children’s and program needs as opposed to program wants and a continued reduction in energy and optimum use of staff leadership.”

“All these stakeholders in the district—be they a parent, the teachers, staff, administration—they all need to come together and work to help see this through. And I think we have to get very creative in our thinking,” Steiger said. “There are businesses and there are individuals who are willing to donate if they feel that their money is going to something that will serve the children and that will actually benefit their education.”

Steiger has been a member of the LMSV School District Budget Study Committee since 2008 and has taken an active role as a parent in the community. According to his website, Steiger is the PTA Vice President for programs at Murdock Elementary and the Vice President for Legislation for the Mount Helix Council of PTA’s, which is the council organization for all the PTAs of the 21 schools of the LMSV district.

The goals of all four candidates are influenced by their role as a parent or teacher. Steiger said, “The children will be the future business people, entrepreneurs, professionals and employees, so it benefits everybody that they get a strong education.”

Steiger is a proud parent of a fifth grader and a third grader, both attending Murdock Elementary. He has visited many of the schools within the district and has volunteered at La Presa Elementary during a holiday event last December. The opportunity to meet students and parents of other schools in economically depressed areas reinforced his desire to bring the community together.

“We have a habit in our society of kind of putting artificial barriers and walls and classifications around ourselves or around each other, and they’re meaningless,” Steiger said. “The one thing that I want to work to make sure we don’t have is the idea of 21 little islands around the district. We have 21 schools—17 elementary and four middle—but we are a community, an educational community, and kind of a family We have a commonality in that we want the best for our kids and we’re here to work for the best possible education that we can give our kids. I definitely want to work on that and pull down the barriers,” added Steiger.

Winet also shares that commonality and is a parent of three who have gone through the district, and one child who is still in the district. “That was one of the reasons I ran initially 12 years ago was to try to provide and help steer in the best public educational product possible for the district,” Winet said.

Both of Halgren’s children attended schools within the district and she says she understands what it means to be a parent and the concerns that parents have. “I remember, not too long ago, what goes on with children and the challenges of balancing work, family and personal time with what’s going on at school,” Halgren said. She says she has a bigger perspective now that her kids aren’t present in the schools because it’s not so personal.

In addition to having worked as a teacher, special education teacher, counselor, administrative assistant and substitute, Duff is a proud grandparent to children in the district. When asked if that will have an influence on his decision-making, he said, “You betcha.”

With that in mind, Duff highlights the importance of an uncompleted goal, which is the re-visitation of a K-6 school philosophy. “In addition to being a money-saver, it affords an element of safety to youth and time for children to grow up uninhibited by peer group pressures and bullying,” Duff said. Maintaining safer schools is a top priority of all four candidates. 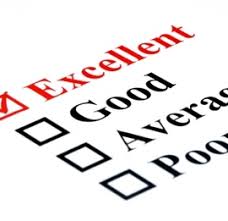 Steiger also emphasized the value in celebrating the district and student successes. And as a proactive parent and challenger, there are some things that Steiger would have liked the board to have done differently in the past. He was one of the parents who spoke out against the decision to prevent teachers from showing President Barack Obama’s speech to young students.

“You’re exceeding your authority as a school board to make this decision. Emotions and personal biases were unfortunately leading the decision and they shouldn’t have,” Steiger said. “If I had been on the board, I most assuredly would have voted for showing the speech. And I would’ve voted regardless of who won the election. If Senator McCain had won, I would’ve not changed my vote a bit.”

Steiger feels that Obama, as well as other leading officials, have every right to speak to children about the importance of doing well in school. “I think it’s a great idea for you to go out and engage the children and show them that someone’s thinking about them in a leadership position, and lead by example,” Steiger said. “So I hope that the board will not go down into political territory again.” 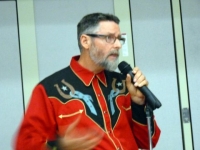 Paul Schnaubelt, the president of the LMSV Teacher’s Association, told The San Diego Union Tribune that “the board’s decision left the impression that the school board doesn’t trust principals and teachers to handle curriculum and instruction.”

The three trustees who voted against showing the speech later regretted the decision and issued apologies after receiving angry e-mails and negative feedback from parents and community members. 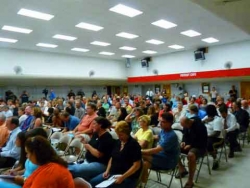 Halgren, one of the board members who initially supported the censorship, said she felt that the discussion was really cut off once emotion was presented. “I probably should’ve voted against that motion so that I could gain the insight that I needed in order to understand what was important to the community. I was missing that,” Halgren said. “I wanted to give the teachers an opportunity to create a rich educational type discussion around the comments that President Obama was going to be making.”

“I am a registered Democrat and I’m very proud of that but that’s not what drives me in making educational decisions,” Steiger said. “Let’s make sure the children are getting an education because education is nonpartisan and school boards should conduct their business in a nonpartisan way.”

The general election will take place on Nov. 2 and three of these four candidates will be selected to serve as board members for the LMSV school district. The incumbents have all expressed that they have been proud to have had the privilege and honor to serve the district. And the challenger would like voters to know that he will maintain an active role in the school district regardless of the election results.

For more information about the candidates, visit their websites at:
Jay Steiger: www.jay4school.com
Bob Duff: www.smartvoter.org/2010/11/02/ca/sd/vote/duff_b
Rick Winet and Penny Halgren have not provided websites.
For additional information on all candidates, view their responses to a questionnaire sent by the Union-Tribune at http://www.signonsandiego.com/news/2010/oct/07/la-mesa-spring-valley-sch... and see www.smartvoter.org.