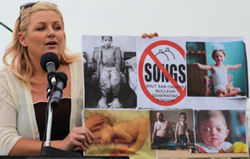 “The most important things to me are my children,” said Chrystal Coleman, a Vista resident who displayed photos of children hideously deformed by radiation from the Chernobyl nuclear meltdown.  Coleman said she would “do anything” to stop this from happening in San Diego.

Libbe HaLevy, M.A., CAC spoke of her experiences during the Three Mile Island nuclear accident. She was there when the disaster started. 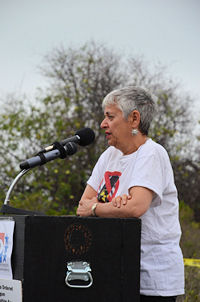 The first day at Middletown, in the shadow of Three Miles Island, people thought it was nothing to worry about, she indicated.  By the second she could have left, but chose to stay and cover the story. By the third, cars were going around telling people to stay indoors. Evacuation was impossible.

HaLevy pointed out that according to Arnie Gunderson there has never been an honest reading of the radiation at Three Mile Island. It is not because nobody tried, but rather that the equipment fried from the intense release.
HaLevy also emphasized that this is a David and Goliath fight, since the people are fighting powerful forces in the utility, as well as corporate interests. From her terror filled days during the Three Mile Island event she learned that there was “no basement to hide,” from the radiation.
Shaun Burnie from Green Peace went into the details of what happened in Germany. Anti-nuclear forces had lost the battle initially, with Chancellor Angela Merkel promising the utilities an ability to expand Nuclear power. Then came Fukushima—the nightmare meltdown of reactors in Japan that has contaminated much of the nation. The consequences of that accident, still ongoing, persuaded Germany to commission an Ethics Commission. In the end the Bundestag voted unanimously to close nuclear.
Germany is well on its way to develop green technology and a distributive energy grid. Moreover, the Chancellor now understands that “nuclear has no future in Germany,” Burnie said, urging activists to never give up hope, even when a fight seems lost.  In the end he hopes that San Onofre is shut down.
Don Hirsh raised the alarm on problems Southern California Edison has had with the National Regulatory Commission. (NRC). According to Hirsh the issues with the San Onofre plant are very serious, and the steam generator problems are above where the plant should remain operational. The problem he sees is that the regulatory capture (industry representatives in the regulatory agencies) has been so severe that they may still succeed in restarting the reactors. 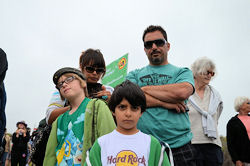 Moreover, he mentioned that evacuation is a fiction. Anybody who is familiar with traffic in Southern California would be forced to nod in agreement. In his opinion a worst case scenario not only will destroy billions in property, and kill hundreds of thousands of southern Californians. He also pointed something else.
The US Government advised American living in Japan to evacuate within the fifty mile exclusion zone. The Evacuation zone around San Onofre is only ten miles. A fifty mile radius would include San Diego and much of East County.
Hirsh raised technical issues, such as the possible risk of criticality, or material that starts to fission again in storage units. He cited Southern California Edison’s very poor safety record, including not maintaining logs on fire watches to make sure that accidental fires do not start. He also mentioned that Unit Two has lost about 12% of the steam generator tubes, and they should only be able to operate with at the most an 8% loss. 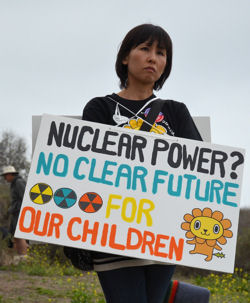 The worst case scenario for Southern California Edison is that we go through the summer without any rolling blackouts or other power issues. It will prove that it can be done.
Among the speakers was Ray Lutz of El Cajon, founder of Citizens Oversight Projects, who voiced concerns over steam generators that have been having problems over the last few months.
Lutz said energy companies wanted to “push the envelope” to produce more power. He also showed a graph where the mining of uranium is becoming harder, and noted that it is very carbon intensive.  He suggested that there are other solutions to our energy needs, such as solar.
Among those who came to this demonstration were the Nakamizo family, who came from Tokyo to participate in this demonstration, and bear witness to what has happened in Japan and could happen here.
Minutes of silence were observed for the victims of nuclear power.
Congressman Bob Filner, who could not attend, also sent a message supporting the call to shut down the nuclear facilities permanently.