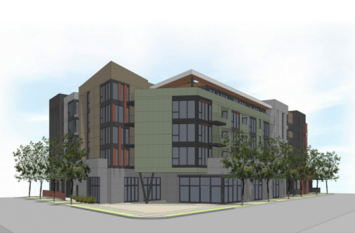 January 23, 2023 (La Mesa) -- On January 10, La Mesa’s City Council ratified the Design Review Board’s approval of the Palm Avenue Apartments, which are slated to be built at the same site where the historic Randall Lamb building burned down during the 2020 George Floyd riots. The vote was 4-0, with Councilmember Laura Lothian abstaining because her office is close to the site.

The development has brought about much debate among La Mesa residents. The five-story building would house 64 rental units, with only 29 parking spaces – less than one for each unit.  There will also be room for at least one business in the building, where apartment rents are expected to start at around $1,000 for units designated as affordable and run from $2,100 to $2,900 for other units, per the developer, Palm Street Ventures LLC.