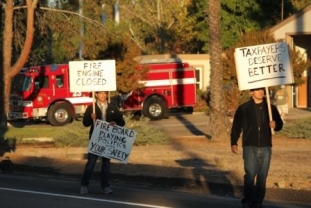 Update:  San Miguel Fire Protection District board member Theresa McKenna has responded to Robert Perry's editorial to detail how much notice and discussion has been held on this issue. Read her remarks here.

Photo:  Protest at station closed due to budget gaps back when San Miguel was a stand-alone station, before contracting with Cal Fire. Opinions ran hot on both sides of the partnership deal at that time.

July 2, 2016 (San Diego’s East County) --With zero public input and zero community discussion (thus far) the San Miguel Fire Protection District has an action item on the agenda for the board meeting of July 6, 2016 to "discuss and may approve returning to a stand alone District".  View agenda.

The district has contracted with CAL FIRE the past four years after facing a structural deficit of their own making.  There is one more year of the contract.

The only force behind returning to a stand alone district is the former employees who are chafing under employment by CAL FIRE.  There is no apparent community desire to leave CAL FIRE.

The board has never listed any measurable advantages to leave CAL FIRE and return to a stand alone district.

The fact that there has been no community outreach, no town hall meetings, no media releases about this momentous change appears to be a red flag that community input is not wanted for fear of community opposition.

A proposal that resembles a mushroom in that has grown in the dark.

The meeting will be held July 6th at 5:30 p.m. at The San Miguel Fire District Board Room, 2850 Via Orange Way in Spring Valley 92077.  The opinions expressed in this editorial reflect the views of the author and do not necessarily reflect the views of East County Magazine.  To submit an editorial for consideration, contact editor@eastcountymagazine.org.