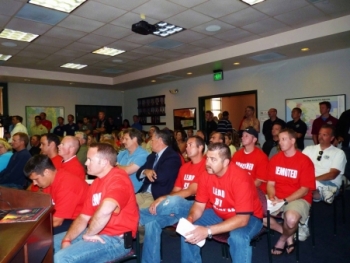 Beginning as far back as February 11, 2015, and on at least 30 (thirty) separate occasions up to today, this Board’s consideration of a stand-alone agency has been announced in various public forums.  Aside from lengthy discussions at numbers Regular Board meetings and Finance Committee meetings, public notice has included, but has not been limited to, the following:  1) Public postings of Board Agenda via the District office and District website; 2) Public distribution of Agenda and accompanying documentation by way of emails; 3) Public Board meetings; 4) Social Media Announcements via the “CalFire San Miguel Firefighters” Facebook page (recently renamed “CAL FIRE Local #2881 District X Firefighters of San Miguel”); 5) an Ad placed in the Union Tribune by CalFire Local 2881 on June 5, 2016, (which I believe may have been a full-page ad, that can be found here:  http://sandiegouniontribune.com.ca.newsmemory.com/publink.php?shareid=18d0137dc&pSetup=sandiegouniontribune#.V1Sxk3Np9VQ.gmail); and 6) Broadcasts by NBC 7 News back in May, 2016 (which can be found here:  http://www.nbcsandiego.com/on-air/as-seen-on/Regina4P0519_San-Diego-380199561.html.)

I think it is very important to note that, based on historical Board Minutes, by prior Board majority vote (i.e., Director Dave Rickards; and prior-Directors Rick Augustine, Larry Jackman, and Chris Winter all in favor); it took less than 30 days from the time CalFire submitted its Request for Proposal (i.e., March 28, 2012), to the time the prior Board voted to Contract out its core fire services to CalFire on (i.e., April 25, 2012; a $68 million Contract).

On the date of the scheduled vote, this Board will have been considering the stand-alone option, (as well as explored other options), a total of 498 days.

Although it is a Holiday weekend, I did make some time to reply to Mr. Perry this morning which included, in pertinent part, sharing with him the following:

…Please understand that, given my personal obligations, personal work schedule, this being a Holiday Weekend, and preparing for the upcoming Board meeting itself, I am not able to respond to your emails as fully as I would like.  I will, however, be addressing all of your concerns in great detail at the Special Board Meeting.

Be assured, I have dedicated an enormous amount of time (literally hundreds of hours) reviewing the historical, current and anticipated future financial position of this District in great detail in my efforts to ensure my due diligence in fully considering the stand-alone agency concept.  I can further assure you that nothing about this concept – nor the financial study – has been “very quick”.  As you may recall from our recent phone conversation, this Board has been exploring this and other options for well over a year now in our ongoing efforts to ensure the Citizens of this District are receiving the best services in the most fiscally responsible way possible.

As you may further recall, my focus on the financial position of this District occurred long before I even considered running for a position on the San Miguel Fire District’s Board of Directors.  As far back as 2010, I, much like you, addressed the Board as a citizen of this District on a regular basis voicing my personal concerns about what I found to be irresponsible spending by the Fire Chief and what I perceived to be a lack of Board oversight at that time.  Things such as alcohol, steak dinners, and crème Brule being purchased with taxpayer dollars were just the tip of the ice berg of misdeeds that prompted me to run for office.   As I have stated time and time again, I do not believe the District ever had a revenue problem, but rather a spending problem by management at that time.

To answer your question, three measurable advantages I am taking under serious consideration with regard to whether or not returning to a stand-alone agency is in the best interest of this District are:  1) Financial savings and long-term financial stability of the District; 2) Local Control; and 3) Safe Guarding of District Assets.  I will be addressing these more fully at the Special Board Meeting on July 6th and will, at that time, make my final determination based upon whether or not the information provided and considered by the full Board provides solid advantages for the residents of this Community.

Please be assured that I consider my position as a Director one of incredible responsibility to the Citizens of this District whom I have proudly served for over 22 years.  I can give you my personal guarantee that I would not put my name behind any proposal that was not in the best interest of this Community as a whole…regardless of who voted for me in any election.  I believe that anyone who knows me personally, knows that I do not do anything someone else tells me to do, but rather I do what I decide is right morally, ethically, responsibly, and in the best interest of this Community as a whole.  Well over 6,000 citizens of this District believed in my integrity and moral character and elected me to this Board.  I answer to them and have the Citizens of this Community first and foremost in my decisions.

Thank you, again, for your ongoing concerns regarding this District.  I look forward to seeing you at the Special Board Meeting and welcome any additional comments and concerns you might have.  Wishing you and your family a very Happy 4th of July weekend.

Sadly, , as you may know, our Board meetings are rarely attended by Citizens in our Community.  I know overall our Citizens care very much about their Fire District; however, I can appreciate many have very busy schedules and family commitments that preclude them from attending.  I also believe the citizens who put their trust in us during the last election know that we will do everything in our power to ensure fiscal responsibility in providing them with the best service possible.