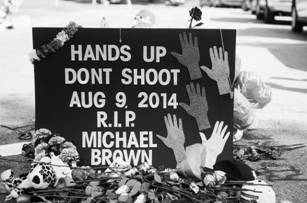 November 14, 2014 (Ferguson MO) -- It’s been over 100 days since Darren Wilson killed unarmed young African American Michael Brown and the world is watching and waiting to hear the forgone conclusion of white officer Wilson’s non-indictment. Many expect a violent reaction from an angry community when there is no indictment.

There is little mainstream coverage of the many groups within the St. Louis region that have begun important conversations, nonviolence trainings and planning to make positive change in their communities.  It is important to understand and challenge violence in all of its forms (direct and structural).  While we are all familiar with direct violence, it is just as important to understand structural violence, which includes many forms of injustice ultimately backed by the threat of violence. If you have warehouses of food and our families are starving you need guns to keep us from taking what we need. Poverty is structural violence.

Handmaiden to structural violence are media perceptions that characterize and stereotype all protestors as violent, even when the vast majority are peacefully working toward productive change.  This, in turn, directly feeds the official rhetoric of fear and preparation to suppress community rebellion—preparations that look an awfully lot like staging grounds for war. Media drumbeats of impending war also prompt vigilante preparations that exacerbate racial divides and promote even greater structural violence.

This militarization creates a dynamic of fear, which often has a self fulfilling prophesy of creating a powder keg ready to explode at any sign of the expression of frustration. A massive and intimidating show of violent threat by the state against its own people can produce exactly what it supposedly deters. Police become troops, urban soldiers on hair-trigger, and democratic dissent is targeted for possible annihilation.

What would lead to a sense of calm--such as deep and prolonged conversation, listening and positive action--is not on that official table.

The messages being communicated to the broader community include, “take precautions in the event that the Grand Jury’s findings results in civil unrest.”  Washington University reassured its community members that “we are taking every possible precaution to be prepared” (Chancellor Mark S. Wrighton).  One employee of an upscale steakhouse described how employees practice an evacuation plan in case “something happens.” A resident of Canfield Green, the complex where Michael Brown lived and died, said men came to his door recently and asked him if he had an escape plan for after the indictment outcome.  According to Clayton Police Chief Kevin Murphy “We have sent out cards to over 200 businesses to let them know how they can prepare for emergencies in the short term.” In addition, police officials seemed to have encouraged employers, schools, and a myriad of local institutions to board their windows and even close.

This preparation for ‘violence and civil unrest’ has the opposite effect of its stated intentions, and instead creates a presupposition that protesters will be violent, reinforcing anti-protestor sentiment and racial stereotypes of young angry irrational black protestors and outside agitators. Our own experience with the protest illustrates how the tenor changes from lively chants to more anger when police get in formation with riot gear.

The fears of protestors seem absurd when the actions of those (police) who are actually preparing for violence are the actual cause for demonstrations.  While Gov Nixon touts his desire for peace, officials’ actions as one Ferguson resident describes it, amount to preparation for war.

So in this frenzy, there seems to be justification of the increased police militarization in the St. Louis region and across the country, as well as the spillover into the community, where guns, ammunition and firing range purchases have increased significantly.  In reality, the reliance on weapons to solve conflict-- evidenced by laws that encourage gun ownership and use, like ‘stand your ground’--does not deter violence; it only encourages vigilantism. On October 27th, gun enthusiasts marched through downtown St. Louis openly carrying multiple firearms, without any interference from police, while unarmed protestors are routinely harassed by police in riot gear.

Some public officials are attempting to deal with the structural issues surrounding police brutality and its underlying conditions, but overall we witness more stockpiled weapons, leaked grand jury information, and violated rights to protest.

Martin Luther King described this sort of “negative peace”: “So long as the Negro maintained this subservient attitude and accepted the place assigned to him, a sort of racial peace existed. But it was an uneasy peace in which the Negro was forced patiently to submit to insult, injustice and exploitation. It was a negative peace. True peace is not merely the absence of some negative force- tension, confusion or war; it is the presence of some positive force- justice, good will and brotherhood.”

Instead of focusing on dialogue and reconciliation, the police and the Nixon and the Mayor of Ferguson have attempted to maintain control, which leads to more resentment.

To get to true peace, there must be a long-term commitment to open conversation and structured dialogue that allows all citizens to tell their stories, voice their perspectives, and suggest the sorts of structural change that might lead to reconciliation.

Some of this is occurring.  The Center for Educational Equity with the Peace and Justice Studies Association will be holding dialogues and convening a truth-telling process, calling on victims of police violence from Ferguson, the surrounding areas, and across the nation to come to St. Louis and speak truth about this brutalization and what they believe are the root causes.

Only when voices from the ground, not just government sponsored programs, are heard and experiences validated is healing possible.  Truth-telling that leads to reconciliation and peace is not some week or month-long event, but a sustained community process based on a human dignity and rights framework, which requires a real commitment to listening.  To learn about, support  be a part of such important initiatives, visit http://ceestl.org/community-institute-truth-justice-reconciliation/

Dr. David Ragland is from North St. Louis, MO, writes for PeaceVoice and is a Visiting Professor of Education at Bucknell University. Wayne Adams is videographer from University City, MO.Mahdis Azarmandi researches the role of colonialism in anti-racist work at Otago in New Zealand. Dr. Mark Lance is professor of philosophy at Georgetown University. The opinions in this editorial reflect the views of the authors and do not necessarily reflect the views of East County Magazine. To submit an editorial for consideration, contact editor@eastcountymagazine.org.

I will make a brief comment on this excellent analysis of the situation in Ferguson and circumstances related. The complexity and entrenchment of racial tension and all that comes with it makes every confrontation problematic and each appears to up the ante. Each is another turn of the screw and a possibility that what happens will make a bad situation worse. The recent Justice Department situation, and for that I refer to East County Magazine article "Justice Dept's Action Will Derail Civil Rights, Coalition Leaders Say", is just such a turn and twist that tightens and puts a strangle hold on the ability to use litigation to solve inequities. These closures of freedom make people desperate and everyone who has ever been under pressure knows this. It is as if a malevolent and perverse hand moves the chess pieces towards violence. The media is a Janus faced god, helping sometimes to keep freedom while feeding on any excitement, which is its life's blood. On the one hand the situation is under-reported, and on the other the media serves as an inflammatory entity in an already combustible situation. Everyone knows that putting pressure on things can often facilitate explosion. Closing judicial hope makes people lose hope and violence occurs when people have nothing to lose or are so pressed upon they lose control. I do think that speaking things can bring them into being. The spoken and written word have a special power. When people are impoverished they are being told that they do not matter and they do get the message. Self esteem is based on hope and opportunity. Withholding education and litigation is not the way to build leaders generally although it has happened. The idea of the difference between structured violence vs. direct violence is very thin. We are walking on a tightrope in this country and ALL citizens have something to lose if the people of Ferguson and other cities where this same problem of white leadership over mostly African American populations is the norm. Whites are feeling the strangle hold of these times too, and possibly that will bring some understanding and dialogue. I am hopeful despite all because I believe the human spirit is tough and I am hopeful this situation can bring healing and not more heartache. MJ Payne Author The Remembered Self
I enjoyed reading this editorial piece. It seems as though everyone in Ferguson and it's nearby environs is expecting some sort of uprising with regard to the indictment and/or non-indictment of the white police officer - Darren Wilson. Based on past outcomes in cases of similar ilk, the general consensus in Ferguson and other places is that the officer will not be indictment and as a result of their thought process communities are preparing for rebellion, or civil unrest of any kind. It surely begs the question why? Are we living in a society/state where there can't be peaceful protests? And, generally, we have to be careful of our thoughts - because what you think, you tend to believe, hence the self-fulfilling prophecy, you expect unrest so that what you will get. I read somewhere that gun sales have gone up in Ferguson since Michael Brown's killing, and residents are preparing themselves for "war" based on the outcome as to whether the officer will be indicted or not. I say let the justice system work, let's not believe that it will not, it's time that we get past this self-fulfilling prophecy theory because we are bigger than that. Jacqueline Carr Adjunct Instructor, Author of A Selected Few Just For You.