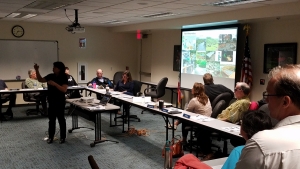 The advisory group recommends a plan to Supervisors for extensive redevelopment of Campo Road, plus a park on Conrad Drive

January 9, 2018 (Casa de Oro) -- Before the main freeway arteries of State Highway 94 and Interstate Highway 8 were built, Campo Road in the East County community of Casa de Oro was a center of community and commerce. Even earlier, Campo Road served as a wagon road providing access to eastern San Diego County as well as Imperial County; it was added to the state highway system in 1933. But lack of vision and planning in the last 20 years has caused Campo Road to now be home to empty storefronts, liquor stores, smoke shops, medical marijuana dispensaries, dive bars, massage parlors, hookah lounges, and tattoo parlors interspersed with other businesses. Some of these shops turn a blind eye to local and state laws and regulations. 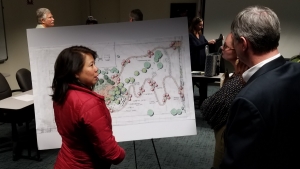 On the heels of a consulting report developed by Michael Baker International and commissioned by the San Diego County Board of Supervisors, Daniel K. Wiery from the engineering and community development firm shared findings with the Valle De Oro Planning Group (VOPG) last week of what the report’s authors believe is needed to redevelop the blighted community into a positive economic area.

The locally-elected citizen advisory group will release a letter indicating their support for the plan they believe to be in the best interests of the community at the January 24th meeting of the Board of Supervisors.

In a presentation (which lacked visual graphics, to the consternation of some members of the planning group), Wiery and County of San Diego Land Use/Environmental Planner Tara Lieberman gave an overview of the challenges faced by the Casa de Oro community along Campo Road.

The objectives of the initial study, based on a conceptual plan developed by the Casa De Oro Alliance, considered the area of Campo Road from Bancroft Drive to the west and North and South Granada avenues. It delved into County code compliance, community facilities, and owner neglect.

According to Lieberman, the conclusions on the yet-to-be officially released report were based on 55 “stakeholder” interviews conducted on Nov. 9th and 14th in the vicinity of Campo Road and a community outreach event held in mid-December. 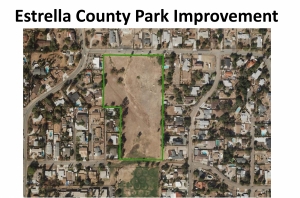 The report outlines six options for approaching a revitalization of the Casa de Oro area, divided into two categories: community-based financing options (establishing a business district for funding the improvements needed) and regulatory tool options (revising existing area code enforcement regulations). From there the report outlined six development options which can be combined based on local agreement.

Wiery summarized the main points of the report saying that the key reason that the Campo Road community has become blighted was due to a lack of vision and identity, and that basic oversight that has not taken place in the community over many years. He said that the area’s heydays were in the 1950s and ‘60s before State Highway 94 and Interstate I-8 were built and opened. “Campo Road has struggled since I-8 and Highway 94 went in and sucked the economic energy out of the area. The obvious thing is that the neighborhoods surrounding the area have changed and grown and matured but the street has not changed that much,” he said. “Campo Road used to be ‘the’ primary road but has not been that over many years.”

Wiery said that vague current zoning of the immediate community area has brought about many of the problems which now plague Campo Road. The eastern section is very different from the west section of the road which has resulted in the “one size fits all” general zoning of the area currently in place. “One of the biggest problems is that many of the buildings are stuck in a stalemate. They cannot develop, redevelop, and improve, that most communities do over time,” he said. “There is a constant change going on in healthy areas.”

Casa de Oro and Campo Road have become magnets for crime in East County. According to figures released by San Diego Area Association of Governments, (SANDAG), violent crimes have increased 17 percent for the period of 2014 to 2015 (for which figures are available for direct comparison) while most of the other unincorporated area of East County have dropped during the same period.

Casa de Oro registered its first gang-suspected homicide of 2018 last Thursday night when a man was shot and killed during a fight outside of the Albertson’s grocery store on the 9800-block of Campo Road.

Despite the importance of this issue, it was not directly raised by either Wiery or the VOPG during the community meeting. (ECM contacted Lieberman on why the crime issue was not discussed in the report but she did not respond.)

Although the area’s high crime issue was not discussed during Tuesday’s meeting, Bob Yarris, chairperson of the Casa de Oro Community Alliance, expressed a positive view of the redevelopment plans which are winding and working themselves through the approval process 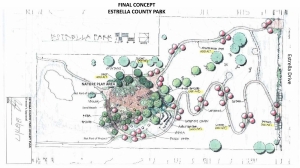 “I think the outcome of this meeting was excellent. I think for them to support the final plan -- the specific plan -- almost unanimously -- is excellent,” he said. “The Alliance has been working with the Sheriff’s department on specific policies and ordinances that will address the negative elements on Campo Road,” Yarris added.

Voting on revitalizing the area, the Valle de Oro Planning Group endorsed the report’s “specific plan” -- an all-encompassing three-year effort (with an estimated completion date by the third quarter of the 2021/2022 fiscal year).  This plan comes with a nearly 3/4 of a million-dollar price tag and would bring major architectural changes to the area as well as formation of a formal business district organization funded through a surtax that would be funded through an area sales tax or through property tax collections. The Casa de Oro Alliance or new Business Improvement District would be in charge of promoting and publicizing the business district, coordinating community events, and advocating on behalf of businesses.

As a part of the vote, the group approved the establishment of interim design guidelines to be adhered for all future development based on design guidelines which are used by other unincorporated areas of San Diego County.

At the conclusion of the meeting in a 9-to-1 vote (with member Lori Myers casting the only “no”), the planning group recommended that Supervisors approve the “specific plan” with interim design guidelines to be developed.

In other business, the Valle De Oro Planning Group earlier in the evening unanimously recommended that Supervisors approve the County Parks proposal to redevelop Estrella Park as an eight-acre “walking park” off Conrad Drive on Estrella Drive in Casa de Oro. Now just a bare lot, the park will be developed with walking paths including vegetation which replicates drought resistant bushes, trees, and succulents found in San Diego County. It will also have a nearby a rope bridge and a children’s play area. A wetland area which already exists on the lot will be preserved.

The park has been ten years in development. Although it will not have an accommodation for handicapped individuals using Americans with Disabilities Act as a standard, County officials said that access may be developed in the future in a second phase should additional development funds become available. Construction of the $700,000 park is expected to take six-to-nine months with completion slated for the end of the year.