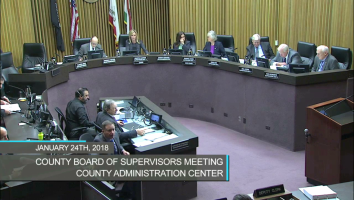 February 1, 2018 (Casa de Oro) – The San Diego County Board of voted in principal to approve a blueprint laid out for the eventual revitalizing of the Campo Road area of Casa de Oro at last Thursday’s meeting. 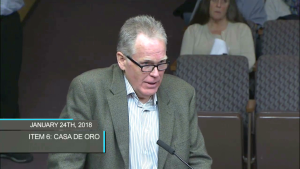 In a 5-0 vote, Supervisors approved a report commissioned last September to secure an outside consultant, Michael Baker International, to work with the Casa de Oro Alliance to develop a revitalization plan with a timeline and projected costs that would meet the goals and objectives of the Alliance’s conceptual plan for the blighted community. (The Casa de Oro Alliance members include the Grossmont-Mt. Helix Improvement Association, the Spring Valley and Valle de Oro community planning groups, local businesses and property owners.)

The study and survey location included the area from Granada Avenue to Rogers Road, with a possibility of extending it in the future to Bancroft Drive. 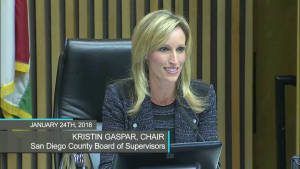 Three financing options were identified, as well, specifically, a Business Improvement District, a Community Facilities District, and funding of the project which would include the sale of financing bonds.

For the revitalization program to be successful, the community and business interests must be involved the report states.

The regulatory options of the revitalization funds include adopting community design guidelines, form based code enforcement, and specific development plans.

“Form-based code” (FBC) is a way to regulate development that controls building form first and building use second, with the purpose of achieving a particular type of “place” or built environment based on a community vision. Local examples of this are the Alpine Village and Ramona Town Center, developments. In other words, the idea behind FBC also take into account the buildings’ relationships to one another, the public streets and the streetscape. Many cities and towns are turning to FBC when they find traditional conventional area zoning too broad and does not meet area goals such as revitalization, more housing, etc.

Other San Diego County cities as El Cajon have found success by establishing a business improvement district where services in the district are funded through property tax bills.

The County Planning Department recommended the Board of Supervisors find in accordance with the California Environmental Quality Act (CEQA) guidelines that its approval is exempt from CEQA guidelines and the Casa De Oro Revitalization Report developed by the outside consultant be accepted. 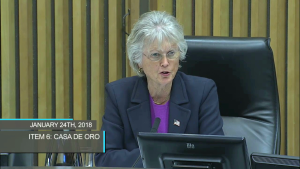 All of the eight speakers who opted to address the Board of Supervisors on the plan urged approval.

David Johnston, chairman of the Valle De Oro Planning Group, spoke of the group’s approval of the Casa de Oro Alliance’s plan. “We think it is very important to revitalize Casa de Oro. What has basically happened to Casa de Oro is functional obsolescence,” he said. He continued to say that it has formed a subcommittee to address issues as they come up during the planning process for the community.

Holly Yarris, a member of the Casa de Oro Community Alliance said that the County of San Diego has overlooked Casa de Oro for decades. “We want you to initiate the steps to correct this,” she said. “Until the County does this and visible changes occur, I cannot support any of the tax options being proposed,” Yarris continued to say.

County Supervisor Dianne Jacob, whose office financed the study with discretionary funds allotted to her recalled that her family for many years kept a horse in a stall near Rogers Road, and taught school near Bancroft is very familiar with the challenges faced by the Casa de Oro area.

“I remember when Casa de Oro was a thriving area decades ago. I have seen as well as the rest of community has seen a drastic decline over the years. Too many pot shops -- and yes -- the community has gone to pot. Our codes people are cleaning it up and any of those dispensaries are illegal and our sheriff’s department is working very aggressively with our codes people,” she said. “Too many smoke shops, liquor stores, and other undesirable land uses,” Jacob continued.

She added that this is not the first time that the board has considered ways to redevelop and improve a community within unincorporated San Diego County citing the its work in the Ramona area. “It took a few years, but the process is pretty well laid out as how we did that. The first step was hiring the outside consultant. [For Casa de Oro] step number one is completed. Before us today is step two. I want to use the same process we used in Ramona to develop specific plans to develop their downtown, form based code, and the design guidelines because it worked,” Jacob said.

Jacob warned the proponents and supporters of a renewed Casa de Oro “would not happen overnight. As many of you would like us to today to approve over a million dollars to move forward on everything, that’s not in the cards. That’s not in the budget,” she said.

Jacob said she would like to go forward with another community survey through the district’s neighborhood investment fund not necessarily to address the question of the financing district. She said that the Casa de Oro property owners must be ready to “step up” to the needs of the community.

Before making her motion to accept the outside consultant’s report, she suggested to the other members of the Board of Supervisors to look at implementing such a program in the larger communities within their districts.

In addition to approving the report, she directed the County’s Chief Administrative Officer to identify potential funding opportunities to support changes to support changes to the regulatory options outlined in the report, including the specific plan, the design guidelines, the form based code focusing on the Casa de Oro area. She also directed the Chief Administrative Office to continue to work with the Casa de Oro Alliance and the Grossmont-Helix Improvement Group, and other area stakeholders to continue to address code enforcement matters in Casa de Oro.

Jacob then requested that $30 thousand dollars from the District 2 Neighborhood Reinvestment Program to be put towards land use improvement group to conduct a survey of property owners and land owners to not only determine the level of interest in forming a business improvement district along Campo Road, but with other questions determined by the Casa de Oro Alliance which would be appropriate.

Before the vote, Jacob concluded, “The launching of this second very important step is going to be added value to the County, as well to the immediate area, Mt. Helix, Spring Valley, and the areas surrounding. It will be successful. I intend to work very diligently and aggressively with the community, the Alliance, GMIA, and others to make this a reality. But it is not going to happen overnight. We need to have realistic expectations. Take it one step at a time, and today is a big step forward.”

SD Board of Supervisors Meeting on Casa de Oro -  http://www.mediafire.com/file/g3trdtms5h69ii3/SDBoardofSupervisorsMeetingJan24th2018.mp4