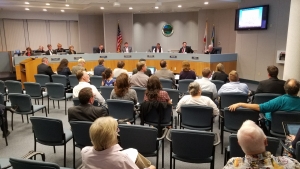 December 29, 2017 (Santee) – Santee’s City Council would like nothing more than to follow in the footsteps of El Cajon and lure a large hotel chain to build a business-class hotel in the growing city. But at Council’s December 13th meeting, it became evident that the biggest question these days is not whether the sprawling community could support such an investment, but rather where to put it. So says a San Francisco-consultant firm that was hired by Santee last Spring to develop a feasibility study on what it would take for it to happen in short order.

Santee does have a share of reasonable hotel accommodations: a 46-room Best Western, a 54-room Rodeway Inn, and a 57-room lodge at Carlton Oaks Country Club.  It also has a campground with 300 hookups and 10 waterfront cabins at Santee Lakes. But it would also like something similar to the four-star Marriott that its neighbor, El Cajon, has opening early this year. That may be hard, however, for Santee to make happen.

HVS Consulting and Valuation, a hospitality industry consulting firm, was hired by the City of Santee last April to not only compile data, analyze market demand, and determine where a hotel could be situated in the city, but also whether a new hotel can be financially successful.

“We also evaluated the major employers in the region to gauge whether or not there will be enough commercial demand for a new hotel development,” said HVS’ Senior Project Manager, Patrick S. Bursey. “We look at those employers and try to get a sense of whether if an upscale hotel can be constructed in this area.”

HVS identified four sites where a hotel could be built:

Bursey said that the future development of the high-end multiplex cinema in Santee and the Karl Strauss Brewery near the Santee Town Center could be attractive to a future hotel developer.

Council member Rob McNellis, a real estate professional, asked Bursey what the typical process and scenario would reasonably be after publishing the final version of the report.

Bursey replied that he is aware that the Marriott hotel chain has expressed interest in developing a hotel in Santee. “It’s a matter of speaking with a broker, speaking with developers, and gauging their interest level,” he added. “First and foremost, from our perspective, [the question] is where a hotel can be built,“ he said, adding that some lots are no longer available.

The final version of the report is slated to be reviewed, finalized, and available for distribution by late January.

Really? I can't imagine Santee being a tourist destination.