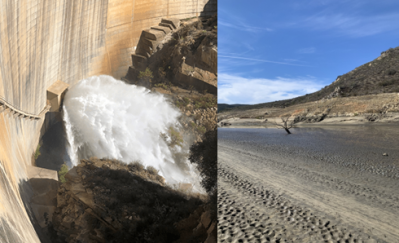 Photo, right: bare mudflat at Loveland, once  400 surface acres, now doomed to be dropped to just 10.

November 23, 2022 (Alpine) – Without any regard to impacts on wildlife, fire danger, rural residents or recreational users at Loveland Reservoir near Alpine in San Diego's East County, the Sweetwater Water Authority (SWA) on November 16 began draining down the lake with an intent to reduce it to “dead pool” level – less than one-half of one percent of the reservoir’s capacity, once draining is completed over the next couple of weeks or so.

The water is being transferred to Sweetwater Reservoir in Spring Valley. From there, it will be used to provide drinking water and other water needs to residents in the South Bay communities of Chula Vista, National City and Bonita.

But critics say  the action is destroying habitat for wildlife, perhaps forever, also eliminating fishing at the area's only reservoir with free fishing access, and threatening firefighters' ability to combat fast-moving wildfires .  Critics also contend that draining the reservoir so low is unnecssary at current drought levels. Yet the people most negatively impacted have no representation on the SWA board, which doesn't include East County.

General Manager Carlos Quintero, in a message on the SWA website, said, “Drought conditions have impacted the Authority’s local water supply. This transfer will enhance the water supply at Sweetwaer Reservoir and provide water and cost savings to the Authority’s ratepayers.” The district notes that drawdowns have been done before -- but historically never this low.

Though the district cites drought as a rationale for the dire action, local drought conditions are far less severe than in prior droughts. The water obtained by pumping Loveland nearly dry would last at most six months and save customers perhaps a few dollars a month on their water bills.

The district has other options.  It could buy water from the County Water Authority, invest invest in additional water storage or recycling as other local districts have done, or mandate more conservation by its ratepayers as has been done at local districts during prior droughts, though SWA customers have voluntarily cut consumption the most of any local area.

Instead of those steps, SWA’s board of directors recently voted unanimously to support draining Loveland so low that fishing has been completely eliminated, wildlife experts fear for the survival of some species, and residents worry how firefighters will fight wildfires in their community if there is not enough water left in Loveland.

Asked about the inequity of  such negative impacts on lake users and lake neighbors who don’t live in the SWA district and have no voice to vote for or against the board members responsible for the decision, SWA's email states, “Matters of equity come into lay when our customers would likely have to pay higher rates so a group of few people can fish.”

Nobody at the SWA would agree to be interviewed by ECM on our East County Magazine radio show.

Three opponents of the draining did agree to be interviewed on our radio show: resident and fisherman Russell Walsh, biologist Kim Dudzik, and Steven Hales, a retired Navy captain working to form a nonprofit to protect Loveland Reservoir.  Their interview was done before we received responses from Sweetwater, though this article has updated reactons from Walsh.  Hear the audio interviews at https://www.eastcountymagazine.org/sites/eastcountymagazine.org/files/au....

The district’s cavalier attitude toward potential environmental devastation and other negative impacts flies in the face of its own mission statement, which according to SWA’s website is “to provide its current and future customers with a safe and reliable water supply through the use of the best available technology, sound management practices, public participation and a balanced approach to human and environmental needs.”

Kim Dudzik is a biologist and dean of science and math at Cuyamaca College.  In an interview with ECM, she said such a drastic draining of the lake could results in a “die-off” of species that rely on the lake, including fish that breed in the lake, nesting birds, mammals that need its drinking water, and even threatened or endangered species such as the Arroyo Toad.  Even if future rainfalls someday replenished the lake, she says, “you could see a big shift in the ecology” with some species never recovering and others moving in.  Besides animals, there are now “plants dying off,” she warned.  On a recent walk through at Loveland after the draining commenced, she observed horse seed plants, wild mustard and cattails that have dried out. “That’s a fire hazard,” she states.

ECM asked SWA whether it consulted with CalFire or other agencies to ask if draining the lake so drastically could negatively impact firefighting abilities, since residents have told ECM that firefighting aircraft regularly have used Loveland as a water source to douse wildfires.

Shoecroft at the SWA dodged answering whether fire authorities were consulted, but stated, “There were no concerns expressed by CalFire regarding lack of water at Loveland Reservoir. As indicated earlier, all water-rights from Loveland Reservoir belong to the Authority’s customers.”

But CalFire San Diego Captain Neil Czapinski told ECM he was unaware of the reservoir being drained or of any contact from the SWA seeking input from CalFire. “I don’t know of anything specifically that Loveland’s released to us, or if they need to do so.  I doubt there’s something like that, because it would usually come through this office,” he added, but said he wasn’t aware if there’s any requirement for SWA to seek input from fire agencies.

Asked how draining Loveland might impact firefighting ability, he said, “Anytime there’s a body of water that is less than their normal capacity, it could impact firefighting, but it has to be that there’s a fire fight there in that general area.” He noted that firefighting helicopters “only need about two feet of water.” It’s unclear whether a two-feet depth will remain at Loveland, however.

Czapinski said there are other waterways, creeks and ponds in the region that could be utilized. But one of the closest, Lake Morena, has already been drained to just 7% of capacity by the City of San Diego – another case of a city controlling water in a rural East County community that has no political power to vote out those making such decisions.

Russell Walsh is a fisherman and activist who has been fighting to save the reservoir, as ECM previously reported.

“What they have is a financial situation,” he says of the SWA. “I believe the drought is being used to manipulate public opinion…There is not a necessity.” He notes that for the past 25 years, SWA got much or most of its water from the San Diego County Water Authority via the aqueduct system. “They have no scarcity of water,” he says. “It’s the cheapest thing for them to do.”

Walsh has long contended that draining the lake so low is prohibited due to a land swap about 25 years ago, under which the SWA received land from the federal government via an easement in exchange for issuing an access easement to the U.S. Forest Service that identified a shoreline fishing program from sunrise to sunset, along with other recreational activities such as birdwatching and hiking.  “Shoreline by definition has water,” Walsh observes wryly.  Read his full argument on maintaining a minimum pool here.

According to Walsh and documents he’s obtained, that access was protected in the wording presented through the Descanso Ranger’s office for Cleveland National Forest back when Descanso Ranger E. Nelson Dean was there.  But now the new Descanso Ranger Forest Service Manager Robert Heiar has taken a different stance. The USFS now claims the land swap only spelled out maximum possible recreation access, but did not mandate it.

Shoecroft's email on behalf of SWA states, “We are not aware of any dispute over the land-swap,” insisting that the easement granting access to Loveland Reservoir for recreational users ”is not a guarantee that there will always be water available.”

That’s disingenuous, since Walsh has repeatedly raised his views disputing the SWA’s interpretation of the land swap in public meetings and in numerous letters sent to the SWA and to various public officials at all levels.

Walsh notes that in fact, the SWA’s prior directors have “used the fishing program water and Forest Service easements’ perpetual existence to induce an $800,000 grant from Congress and HUD to put in the fishing float, which they did in 2008.”  Congressman Duncan Hunter facilitated the HUD grant, he added.

“I believe the Forest Service has abandoned us,” Walsh says, adding that he would like to see Heiar replaced as Descanso Ranger with someone who would take action to protect access.

As for the SWA denying any dispute, Walsh scoffs, “The Authority is very aware of my dispute with the Forest Service, Darrel Issa, Juan Vargas and others,” he said, voicing dismay that all have “stood down” and allowed the draining to commence. He provided emails documenting that neither of the two Congressional representatives were willing to take action on the matter despite the prior agreement with the USFS that Walsh contends is not being honored. The lake is in Issa’s district and SWA is headquartered in Vargas’ district.

Walsh also reached out to Supervisors.  While Jim Desmond voiced support and Joel Anderson sent letters to Sweetwater asking that recreational access be protected, Walsh says that after County Counsel said legal action to protect recreational rights for backcountry residents would require a vote of Supervisors, Anderson declined to introduce the matter on the agenda, an action Walsh believes was likely due to lacking a support among the board majority.

Steven Hales is a retired Navy Captain who along with Walsh and Dudzik is working to create a nonprofit dedicated to saving Loveland Reservoir.

“This is a once-in-a-lifetime resource,” he says of Loveland.  “Once it’s gone and those animals are gone, extinct even, you just can’t snap your fingers and get them back with the next rain. It’s important to do something soon.”

Asked if they are contemplating legal action, Hales said, “Yes, absolutely,” adding, “In the next few weeks that will be one of our number one agenda items, to get an environmental attorney.”  The group also seeks legal help to obtain an injunction to prevent future draining.

The nonprofit, tentatively to be named Friends of Loveland Reservoir, would likely have a mission to protect the water, wildlife, environment and recreational access.

In the meantime, Dudzik urges, “Anybody who does care about this in any capacity – your voice does matter.” She urges the public to go to the Sweetwater Water Authority board meetings and email board members.  “Let them know that you care above Loveland Reservoir,” she said, promising, “We will get organized.”  Her hope is to soon have a website where “we’ll be able to show through videos and pictures what’s happening,” and launch fundraising to support a legal challenge, public education campaign, and more.

Can the lake recover?

“There is a bright side,” Walsh says, voicing thanks for the support of Hales, Dudzik, and others helping to organize and mobilize opposition to SWA’s draining of Loveland Reservoir. He’s reached out to Cleveland National Forest Foundation, which supporting the land swap with the understanding that fishing would be protected, and to other local environmental groups.

He predicts more will join the effort now that draining Loveland is no longer a theoretical threat. “The lake is gone,”  he says, but notes that with enough public support, future draining to such a low level could be stopped.

“The lake will be back,” he predicts. “It’s just going to take some time.”