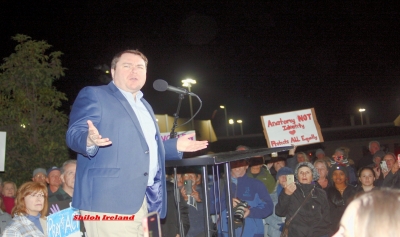 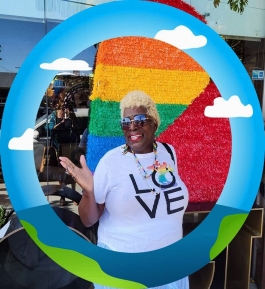 At the flash point of the controversy, 17-year-old Rebecca Phillips told YMCA staff and the Santee City Council that she saw a “naked man” in the locker room earlier this month as Phillips emerged from the shower. The teen had testified that she was traumatized and voiced concern for her younger sister who attends camps at the center.

The person Phillips saw was Christynne Lili Wrene Wood (photo, right), a transgender person who has indicated she has undergone gender-change surgery and considers herself a woman.

Wood has voiced surprise and disappointment over the media frenzy that has ensued, Times of San Diego reported. Phillips has since clarified that she saw Wood from behind. The YMCA staff assured her she was not in danger and has indicated it aims to be respectful and inclusive of everyone’s rights, but the incident has sparked a firestorm of controversy.

The event made national news as well as international news. ECM has run multiple prior articles on the situation. 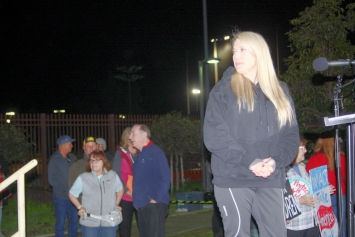 Tracie Thill(photo, left)  of Santee is Founder of SanteeParents4Choice, a Facebook Group and is a parent advocate. Thill organized the January 18th rally and strongly urged calm and keeping the rally local. She gave an impassioned appeal for the rights of children and women and introduced the speakers. ““We no longer feel safe or protected — or respected,” Thill said. 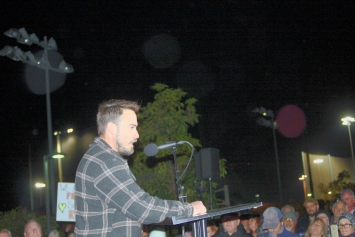 The speaker line up featured conservative guests including two local school board members, Andrew Hayes of Lakeside Union and Anthony Carnevale of Cajon Valley (photo, right), but Santee School Board was absent.

Other speakers were conservative activist Carl DeMaio, former Assemblyman Steve Baldwin, El Cajon Councilmember Phil Ortiz, Santee Councilmember Laura Koval, and Pastor Mike Van Meter of Foothills Church.  Also attending was representation from Gays Against Grooming. The president of the Santee School Board, Dianne El-Hajj, was contacted by for an interview and was deferred to their communications director whom ECM will contact.

Rally goers listened attentively to the  speakers; one protester with signs remained in front of the speaker platform but remained orderly.

Protesting in support of transgender rights were activists from the Socialist Party of  America-PSL-Party for Socialism and Liberation at the far end of the field. It was a small group that made some noise but remained peaceful and the noise or chants did not interfere with the guest speakers of the rally.

Wood addressed transgender rights demonstrators to voice “love” for their support.  Wood has indicated she plans to speak at Wednesday’s Santee City Council meeting to tell her side of the story. 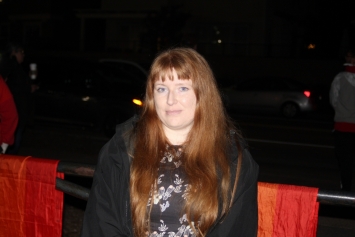 Justine Mann (photo, left), organizer and self-identified as transgender, told ECM that “PSL works for the end of capitalism and for all rights for LGBTQ.+” Asked about residents’ concerned over rights of children and the teen girl, Mann answered, “What happened to her? A transgender woman used the women's restroom.”

Mann noted that transgenders are subject to more violence than others and have a higher victimization than other marginalized groups and have a higher attempted suicide rate . She said PSL is a nonviolent group, adding, “We are just having a fun dance party and will make a lot of noise,” adding that her group is not part of another protest planned at the YMCA.

“What will you like to tell  the Santee Community?”asked ECM. “We are also community members and thank Santee and the YMCA  for dance party and  supporting each other.” 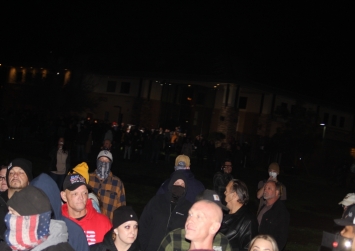 Near the end of the rally, EMC noticed an escalation of sound and movement of a group between the PSL and the rally attendees. EMC walked over and observed tensions flaring between the unidentified groups of about thirty individuals on each side facing off. ECM observed ANTIFA insignia and transgender signs and apparel on one side opposing the other group. EMC asked a member who they represented but was ignored. Was this a fringe group and who were the individuals they were facing off? 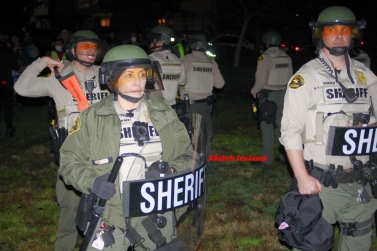 Approximately 30 minutes later, EMC observed a group of about 30 San Diego Sheriff Department members marched out of the back of the YMCA in riot gear. They had an orchestrated march and set up on the field, but upon seeing the police, the two opposing groups left quickly. However, the Sheriff presence did not speak or attempt to order the dispersal of the two vocal groups when they arrived.

Later, three individuals, identified by garb and vocally identifying themselves as ANTIFA lingered and were overheard planning attendance at another protestJanuary 21st protest at YMCA.

How did all this begin, and will other flash points evolve in our communities?

But even before that, in 2021 Wood won a settlement in a lawsuit against Crunch Fitness after the gym denied her the right to use a woman’s locker room. According to the lawsuit, Wood had faced harassment in the men’s locker room when she began transitioning the gender change, despite being a member of the gym for nine years. A black woman, Wood has championed civil rights for transgender people and is the daughter of parents who marched with Martin Luther King, Jr.

The YMCA does offer curtains over its showers, but locker rooms are open. In addition to men’s and women’s locker rooms, there is all an all gender/family bathroom/changing area.  The YMCA has indicated it believes in respecting everyone and will be taking another look at its locker room layout.

The controversy in Santee pits the rights of transgender people to feel safe by using the restrooms and locker rooms of their choice against the privacy concerns of women and girls, and their need to feel safe.

Is fear a rational concern when a transgender person has completed surgery?  What about others who identify as female but may not have undergone surgery? How can the dignity and privacy of everyone be respected?

Will there be a resolution at the Santee YMCA to make all parties feel both comfortable and safe?

ECM would welcome interview opportunities with the YMCA, Phillips and Wood.

no one wants him so he became the rights token gay rebel rouser. anything for screen time!!! just another has been that will not go away!
-- "How a 17-Year-Old’s Locker Room Freakout Became an Anti-Trans Crusade" at the link here