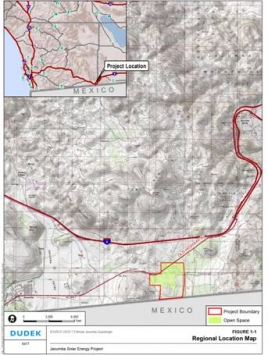 Two proposed solar projects have been revived under new owners

Photo: Map shows site of Boulevard Solar, one of the two former Soitec projects back in the planning pipeline.

September 22, 2017 (Boulevard) -- Boulevard, CA is a small rural community located about 50 miles east of downtown San Diego on Interstate 8,  nary half-an-hour to the Anza Borrego Desert State Park.  While residents – a mix of retired people and younger people who work in San Diego but want to experience rural living – are able to experience the best of both worlds, the stark realities of modern life do punctuate the overall quiet and serene quality of this hamlet.

This was apparent at the Sept. 7th meeting of the Boulevard Planning Group, where the dominant topic was the main threat to the area’s rural atmosphere – the development of alternative energy projects, including the revival of two former Soitec Solar projects now moving forward under new ownership.

While the United States has taken major steps toward developing non-fossil fuel energy sources, it has been at a major cost, especially when the alternative energy projects are built up in rural areas such as Boulevard.

In the past, a major contention for the residents of eastern San Diego County has been SDG&E’s Sunrise Powerlink project, a 117-mile transmission line that carries electricity from the Imperial Valley to San Diego.

Local residents were also up-in-arms several years ago with a large wind turbine project developed and built by San Francisco-based Pattern Energy. According to Pattern’s corporate website, the project which is spread out over 12,500 acres and was completed in 2013 at Ocotillo, consisting of 112 turbines which feed into the SDG&E Sunrise Powerlink project. In spite of a myriad of extreme local concerns which included objections from the Viejas Band of Kumeyaay Indians, the project began feeding into the Sunrise Powerlink project in 2013. Also in 2013, as reported by East County Magazine, the Native American Heritage Commission unanimously declared Pattern’s Ocotillo wind project as sacred site and asked then California Attorney General Kamala Harris to investigate the concerns raised by the commission. (East County Magazine has published many articles about the Pattern Energy Ocotillo project.)

Another “green energy” project on Boulevard’s dance card is the Tule Wind Project being developed by Portland, OR-based Avangrid, a subsidiary of Iberdrola, an energy company based in Bilbao, Spain. In spite of questions once again being raised about the viability of wind projects in what the corporation’s websites call the “wind-rich McCain Valley” and nearby areas of eastern San Diego County, the company says that the project will generate up to 200 megawatts of power – enough to serve some 60,000 local homes. The first phase of the project has been completed.

The Protect Our Communities (POC) activist group has filed an appeal with the Ninth Circuit of the U.S. Court of Appeals. The case, which has yet to be heard, challenges the federal government’s approval of the second phase of the project which allows Avangrid to erect as many as 24 turbines with a capacity of 69 megawatts on land owned by the State of California and the Ewiaapaayp Band of Kumeyaay Indians. POC tried to block the building of the project but lost.

Several years ago, Boulevard residents organized opposition to four large-scale solar projects proposed by Soitec, a French-based semiconductor developer.  Supervisors approved two of these, but rejected the other two. Soon after, Soitec announced it was withdrawing from the solar business, so the approved projects were not built.

The latest project being considered and discussed by the Boulevard Planning Group is Boulevard Solar, a proposed 60 megawatt, 420-acre project to be developed by Invenergy.  Invenergy took control of the project nearly one year ago from Soitec.

Formerly known as the “Tierra Del Sol Solar” project (reflecting the name of the community) on Tierra Del Sol Blvd., Boulevard Solar would consist of a 7,500 square foot photovoltaic solar panel farm. On the site would be 7,336 10-to-12 feet tall single axis tracking photovoltaic panels along with ancillary equipment needed to distribute the energy from the solar panels. The project would also include the installation of a high energy electric line from the solar farm heading northeast across the Jewel Valley to the recently rebuilt Boulevard electric substation.

The Tierra Del Sol solar project proposed initially by Soitec was approved in 2015, with only Supervisor Jacob opposed. A lawsuit led a judge to block the project due to large battery storage units omitted from an environmental impact review, but after changes were made, the project was authorized to proceed.

Another concern about the project was voiced by a resident during the Sept. 7 Boulevard Planning Group meeting. He said that Boulevard residents are dependent on well water for their water needs and that despite a State of California declaration that the most recent drought was over, that his water well has not yet recovered and was concerned that the community’s ground water could be contaminated by the project. ECM has previously reported that the massive water use – some 90 million gallons at the Eco Electric Substation in Jacumba off Highway 94 – and at Boulevard’s proposed solar projects could destroy the ecosystem and drain groundwater resources beyond what could be replenished by rainfall in a worst case scenario according to SDSU hydrologist Victor M. Ponce.

Rugged Solar LLC, a project that was to have been developed at McCain Valley Road and Old Highway 8 by Soitec, has also been up in the air since it was acquired by Clean Focus, after the financially-strapped Soitec backed out of the project earlier this year. Its fate, however, could be decided in mid-October when the site’s “Major Use Project” license expires.  According to Donna Tisdale, chair of the Boulevard Planning Group, Clean Focus, developer of a separate Rugged Solar, will needs to pay the developers of the Tule Wind Project about $140,000 to use Tule's new transmission line that connects to the new Boulevard Substation.

Donna Tisdale, a local activist who heads the Planning Group, said that she would submit to the County the group’s opposition to the current slate of Boulevard power projects. Discussion ensued about requiring the major projects to make major ongoing contributions to Boulevard’s community center and Mountain Empire Schools based on the standard of $1,000 per megawatt that would be generated by the projects.

There was also general discussion at the planning group on the San Diego Board of Supervisors upcoming vote in 2018 on the County’s Climate Action Plan (which includes strategies and measures to reduce “greenhouse” gas emissions from the county and unincorporated county areas) including large scale renewable energy projects in rural communities.

The planning group voted 5-1 to oppose a California Senate bill 649 which would require local jurisdictions to require a “non-discretionary” permit be granted if a wireless facility met certain requirements. San Diego County and the League of Cities is on record as opposing the bill because it would take away local land use authority and restrict involvement from communities when there might be a concern about the impact a wireless telecommunication company might have. Board member Kevin Keane was the single vote supporting the bill, saying that development of wireless infrastructure was important as wireless phone and devices continue to be overwhelming present capacity of local wireless installations. “The current system of cell phone towers is close to collapse because there are not enough towers,” said Keane. “It is a nightmare, especially in an emergency situation. The system as it is now would totally collapse. The building of new cell towers is being bogged down by the current permitting system,” Keane continued to say.

Backcountry off-roading during the weekend remains a major issue for residents of Boulevard when residents from San Diego travel to eastern parts of San Diego County for recreation. There was general discussion about the San Diego County Sheriff Department’s lack of enforcement, when they have been called to mitigate a conflict between property owners and off-road vehicle riders. Discussion ensued that more aggressive patrolling of the situation may occur once signage is installed indicating that off-road vehicles may not be driven or raced in certain areas of Boulevard. Sgt. Nancy Blanco Reserve Coordinator for the San Diego County Sheriff's Department Emergency Service has agreed to be present at the Oct 5th Boulevard Planning Group meeting to discuss the OHV nuisance issues.

Hear an audio recording of the meeting:

Sources of statistics on solar projects: