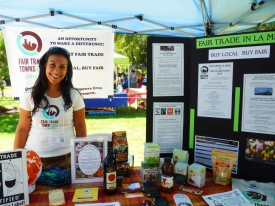 But now some opponents of the Fair Trade Town designation are questioning the appropriateness of the Mayor’s actions—and whether the rules were followed, or broken.

“Yes, I issued the commendation because it was warranted and I, as Mayor, had the authority to do so,” Mayor Madrid told ECM in an e-mail response to our inquiry.  He added that despite the 3-2 vote with Madrid and Councilman David Allan voting in support, “As the Mayor, and after consulting with the City Attorney, it is within my authority to issue such a commendation, and I did.”  ECM has contacted the City Attorney’s office for verification but has not yet received a response.)

Passage of a resolution by Council was one of five steps needed for La Mesa to join a growing list of fair trade cities nationwide. The resolution required no spending by the city but did ask council members to support the concept of informing consumers where free trade products are sold, and to serve fair trade products at its meetings.  Locally, fair trade supporters have met the remaining requirements, including creating a shopping guide listing numerous local merchants offering at least some fair trade products.

Opponents have contended that  the free market should determine what goods buy, that a fair trade movement may be counter to a buy-American movement, and that it would be unfair to promote some merchants’ products over others.

As justification for his unilateral action, Mayor Madrid said that “like climate change” and a host of other issues, “several of the Council members never consider the long term impact these issues will have on our community or society in general.” Noting that the fair trade members are “from a church group in La Mesa,” he added, “They deserved to be acknowledged for their hard work on behalf of others less fortunate than some of us.” He added that he would like to see fair trade products include not only items made in other countries, byt also crafts made by “artisans in the United States who live in less than desirable conditions.”

But in a letter sent to the City Attorney, City Clerk, City Manager and Council members, Fair Trade opponent Scott Kidwell of La Mesa asks whether the Mayor’s actions met city code and ethics requirements, citing multiple code sections. His letter notes that “only the Mayor signed the document, it is not on city letterhead, it was not presented at a properly noticed public meeting, it was not voted on and approved by the city council and it was not offered to all other council members for signature,” thus Kidwell suggests the commendation is “not an official action or position of the City of La Mesa.”

Madrid defends his action, both on moral and legal grounds. “I am proud to be a supporter of fair trade,” he said, likening his support to his backing of other causes such as safe routes to school, combating childhood obesity, walkable communities and the sales tax initiative that funded construction of new public buildings.”

As for the legitimacy of bypassing the Council and taking unilateral action to attain Fair Trade Town status for La Mesa, Madrid said,  “The laws of California allow the Mayor specific authorities and all the sections of our codes cited in Kidwell’s email confirm that authority.” He acknowledged “frustration” by Fair Trade opponents but insists that his actions are legal. “They know squat about democracy,” he concluded.

Had Madrid not taken action, it's possible that he might have won support from one or more new councilmembers, since there are two seats up for election in November, one open, the other currently held by Ruth Stirling.

Opponents also raised a question of whether the action meets the standards established by Fair Trade Cities USA.  According to the organization’s website, a town’s city council or governing body must pass a resolution in support of Fair Trade and the local campaign before such designation can be granted.

However, Nancy Ryan clarified in an e-mail to ECM that "The requrements changed. Fair Trade Towns USA announced the change at their national conference in Chicago last weekend...Now a recommendation and/or endorsement from the mayor of the respective city is all that is needed provided that all of the other requirements have been met...It is a good change and addresses the concern expressed by several other city councils that voting on a resolution of this nature is not within the scope of city government business."

Ryan said she is "pleased that La Mesa has received this distinction. With it comes recognition for our city, both locally and across the U.S.  It will also be a boost to our local merchants. Most importantly, it signifies that consumers are aware of Fair Trade and have the opportunity to purchase products that will result in fostering social, economic and environmental justice in our world."