By Miriam Raftery
January 16, 2020 (El Cajon) – Authorities yesterday announced a $10,000 reward for information to help find Elijah “Bear” Diaz, a member of the Barona Band of Mission Indians who vanished under suspicious circumstances in August 2015.
He was 20 years old at the time and ill from diabetes.  “He was about to get his foot amputated. He couldn’t walk. He was in a wheelchair a few days before,” his mother, Lelanie Joe Thompson told ECM in a interview last year, adding that her son weighed only 110 pounds and could not have left on his own. She said Diaz had only two weeks of insulin left when he disappeared.
He was last seen by his mother when she dropped Diaz off at his home on Joey Avenue, near North Mollison and Interstate 8 in El Cajon on August 29, 2015 around 10 p.m. She is convinced that he was taken against his will.
His crutches, backpack, TV, a comforter and sheets were missing, along with contents of a safe including cash. But his cell phone charger was left behind, and he never picked up his paycheck. His cell phone was turned off on Aug. 30, the morning his mother reported him missing.
Officially, investigators remain unsure whether Diaz left voluntarily or was a victim of a kidnapping, robbery or other crime.
Since he vanished,  there have been no known sightings of Diaz or contacts from him to friends or relatives. There has been no activity on his banking or social media accounts, according to police. 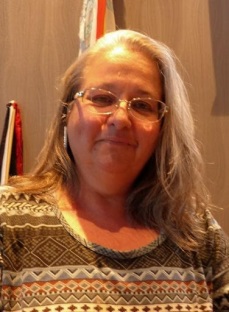 His DNA has been entered into the NamUs database, which can help identify persons found unconscious, with memory loss, or dead. But there have been no matches.
His family hopes someone will come forward with information to help them learn what happened to Elijah “Bear” Diaz.
Somebody came and picked him up and took him somewhere,” LeLanie (photo, right) theorizes. “I believe we’ll get an answer someday. Somebody knows.”
If you have information about this missing young man, please contact the El Cajon Police Department at (619) 579-3311. You can also visit a Facebook page set up at https://www.facebook.com/BringBearDiazHome.