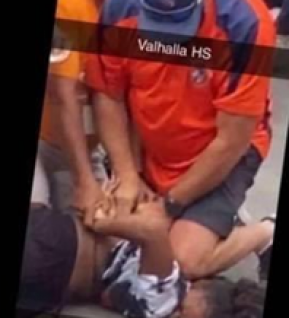 September 4, 2021 (El Cajon) – A campus supervisor at Valhalla High School has been put on paid administrative leave after a video went viral showing him pressing a knee on the neck of an African-American female student. The controversial restraint tactic was used in an effort to break up a fight between two students on August 31.

There are several videos shot from different angles. The 53-second video that went viral shows two African-American girls fighting.  A white supervisor pushed both students to the ground.  Another staffer grabbed one of the girls, who stood and appeared to cease aggressive actions. The supervisor pressed his knee against the neck of the other girl while she is on the ground.

The Grossmont Union High School District released a statement indicating an investigation is underway and that the employee has been placed on paid administrative leave following the viral video.  “Any time allegations of employee misconduct are brought forward, the district takes those allegations very seriously,” the statement reads. “In the event of actual misconduct, the district takes appropriate disciplinary action up to and including dismissal.

GUHSD Superintendent Theresa Kemper also shared a viral video in which she promised transparency, adding, “In light of the events that have taken place in America over the last two years, it’s completely understandable that students and members of our school community are upset.” She indicated the school’s principal has resources to promote “healing” and that counseling services are available on campus.

The Grossmont district also includes Helix Charter High in La Mesa, where a 2018 incident in which a La Mesa Police school resource officer knocked a handcuffed female student to the ground also went video, sparking calls for reform.  But LMPD found the officer did not violate any department protocols and he remains on the force, though not as a school resource officer.

Leaders in San Diego County’s African-American community are speaking out, voicing anger and concern over the Valhalla incident.

Rev. Shane Harris, President of the People’s Alliance for Justice Advocates, calls the incident “concerning and inappropriate. The school official is visibly larger than the girl and the force used seems to appear excessive by someone who isn’t even a police officer,” he said in a prepared statement. Harris indicated he is working toward next steps to assure “justice and restoration.”

Harris has announced a press conference at Valhalla Tuesday at 10 a.m. (rescheduled from Monday) with the two students and their guardian, Anne Ford.  Both students are foster youths, says Harris, a former foster youth who says he knows “all too well how an incident like this can impact the trauma of a child in the foster care system.”  His office was retained as the only national civil rights group with a focus on foster care and due to Harris’ leadership nationwide for foster youths of color. He plans to call for reforms at the event.

The NAACP’s San Diego chapter has issued a statement calling for the campus supervisor to be fired. “"Have we as a society learned nothing about excessive force? Are we still, after all this time, willing to allow reckless and dangerous amounts of force to be used by 'peace' officers? Are we really OK with this level of force being used against children?” an NAACP statement reads.

Francine Maxwell, who heads the local branch of the NAACP, told  10 News that has seen several videos of the incident, which she calls excessive force.

“I viewed that there was more than 30 seconds with the knee being placed on a young African American’s neck … After the murder of Mr. George Floyd, people were supposed to go through de-escalation techniques. There are other tools that don’t have to resemble the carotid restraint,” said Maxwell.

According to Maxwell, the school supervisor is a retired Sheriff’s official, making his use of force against a Black student even more disturbing in her view.

Also troubling is that the14-year-old student subjected to the knee on her neck did not start the altercation, which was initiated by the other girl, Maxwell has stated. She questions why the staffer used a tactic “we know to be lethal” on a girl who weighs just 105 pounds and who was not armed.

She says no action was taken after earlier complaints of a black face incident on campus or a staffer who reportedly used the “N-word” adding, “It is long past time for things to be done. There need to be CONSEQUENCES for violent racist behavior from people under color of authority. When school districts like Grossmont or San Diego Unified aren’t willing to clean house themselves, there are avenues at the State and Federal level to force them to do so,” she told 10 News, then pledged, “We will be pursuing those.”

Kevin LaChapelle, a former El Cajon Police Officer and author of a book on police misconduct, noted that the leg is the strongest part of the human body. “To have that pressure on the neck can cause some serious issues,” he told 10 News.

Neither the district nor the student’s family have announced whether she suffered any physical injuries. But some have voiced concerns over mental or emotional trauma.

Kenya Taylor, a former Supervisorial candidate and mental health expert, is a Valhalla graduate with two children who attended the school “with challenges,” she posted on Facebook.

“It’s worse now,” she states, adding that she didn’t sleep well after seeing the video.  “I can’t imagine the pain the student is going through,” Taylor concludes.

racist whites; there was nothing racist6 about this, SMFH I'm white, I've been pull out of my car w/3 friends at gun point face down in the middle of the intersection with a shotgun couple feet from my head while another cop had his knee on my neck, news flash, you can breath with a knee on the neck, BTW cop said sorry person in the backseat look like someone we are looking for--2hrs later get home-find it was my buddy that was shot in the back here in Santee It's not on the fort of the neck which would cut your air off. It's on the side of the neck. Let's blame the person breaking up the fight and if he didn't break up the fight ya all would blame him still. The blame goes to the 2 fighting. More blame goes to the parents for not teaching these two kids respect and manners, and the right way to act in school. These two should be expelled. if your a school employee and you break up a fight your racist, you fly America flag your racist if your white your racist Not wise to claim racism or that he a racist white person, at some point

Your being very short-sighted, short-stack, to drag our American Flag and you own limited experiences into this discussion while an investigation into this is still ongoing. Your entitled to your opinions but your broad strokes around this couldn't be more divisive and wrong.

Yes, this has to stop!

to our black citizens and it HAS TO STOP. these racist whites need to have the same thing happen to them!