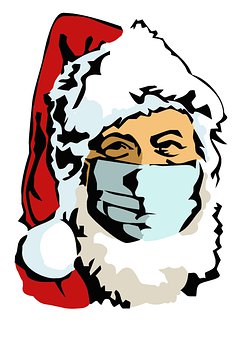 ‘Twas the night before Christmas and all through East County

Not a creature was stirring, in December 2020.

Cowboy boots were hung by chimneys with care

In hopes that St. Nicholas soon would be there.

But they did send Santa these 2021 wishes.

Where owners are reliant on orders to go,

The merchants are eager to have a vaccine

So that we can soon end this long quarantine.

In rural areas where fires burned through

Residents are asking Santa Claus to

Bring plenty of rain on his Christmas Eve flight

Along with a helicopter that can drop water at night.

Up in the mountains where the weather’s turned cold,

The people just want their power to stay on

And shut-off notices from SDG&E to be gone.

The pandemic will end so the Magnolia can open,

Filling the theater in the New Year

With music to spread much-needed cheer.

While renters are asking Santa to send

Payments to landlords to stave off eviction

After layoffs and COVID-19-induced friction.

At Sharp Grossmont Hospital, patients in their beds

Want good health as COVID fears danced in their heads,

While doctors and nurses on the verge of collapse,

Take time out in break rooms for short winter naps,

When up in the sky there arose such a clatter,

They sprang to their feet to see what was the matter.

Away to the exits they flew like a flash,

Tore open the front doors and out they did dash.

The moon on the breast of the sidewalks below

Gave the lustre of mid-day to objects aglow,

Beside hawks and eagles, his reindeer they came,

On Comet! on Cupid! On Donder and Blitzen!

To the top of the roof! O’er the hospital wall,

So onto the helipad the coursers they flew,

With the sleigh full of gifts, and St. Nicholas too.

And then, in a twinkling came a magical poof,

With the prancing and pawing of each little hoof.

As staff drew in their heads, and were turning around,

Down St. Nicholas came to the healthcare team with a bound.

He was dressed in faux fur, from his head to his foot,

And his clothes were all tarnished with pine tar and soot;

A bundle of gifts he had flung on his back,

And he looked like a homeless man opening his pack.

His droll little mouth had a mask with a bow,

So all laughed when they saw him, in spite of themselves;

A wink of his eye and a nod of his head,

He spoke not a word, but turned with a jerk,

Filling wishes for good health and vaccines that will work,

Then he doled out hand sanitizers and toilet paper rolls,

And giving a nod, to the heavens he rose;