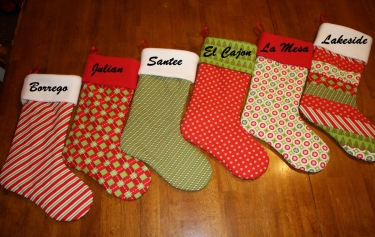 ‘Twas the night before Christmas, and all across East County

Not a creature was stirring, from Julian to El Monte.

The stockings were hung by the chimneys with care

From Barona to Ramona, Jacumba to Jamul,

From smart phones and ipads, amid holiday dishes

Our readers have sent Santa their holiday wishes.

Out in Borrego, where the water’s run low,

The town wants a deluge of rainfall to flow.

To bring in new businesses and make cash registers jingle.

Over in El Cajon, loyal arts fans are hopin’

To stop El Monte Valley from becoming a sand mine.

In La Mesa’s downtown, where a farmers’ market’s begun,

So they’re asking for stockings to be filled with cash.

Descanso just wants power to stay on in their town.

Out at Cottonwood Golf Course, on the 18th hole,

Neighbors ask Santa to  leave a  lump of coal

For the course’s new owner who wants to mine sand

Harming wildlife in a preserve on neighboring land.

Out in the vineyards from valleys to mountaintops

So all the town’s pie makers can be rolling in dough.

The tribe hopes the New Year brings plenty of cheer.

But Congressman Hunter, snuggled in his bed

Has visions of acquittal dancing in his head.

Migrants at our border have no place to stay;

They hope for asylum to start a new life

In the United States, free from fear and from strife.

Local migrants from Mexico and the Mideast

On Mt. Helix, a parole office is proposed near a school;

Neighbors want the project stopped for their Yule.

Just settled down for a long winter's nap,

When out o’er the lodge there arose such a clatter,

They sprang from their beds to see what was the matter.

Away to the windows they flew like a flash,

Jumped on e-scooters and out they did dash.

The moon on the breast of the new-fallen snow

Gave the lustre of mid-day to objects below,

Beside golden eagles his reindeer they came,

On, Comet! on Cupid! on, Donder and Blitzen!

To the top of the mountain!  Then the new border wall.

When they meet with a wind turbine, mount to the sky,

So up to the Mount Laguna the coursers they flew,

With the sleigh full of toys, and St. Nicholas too.

And then, in a twinkling, guests heard on the roof

The prancing and pawing of each little hoof.

As  they texted the good news and were turning around,

Down the chimney St. Nicholas came with a bound.

He was dressed in faux-fur, from his head to his foot,

And his clothes were all tarnished with wildfires’ soot;

A bundle of toys he had flung on his back,

And he looked like a backpacker opening his pack.

A hemp pipe, now legal, he held tight in his teeth,

He was chubby and plump, a right jolly old elfy,

So guests laughed when they saw him, and some took a selfie;

A wink of his eye and the red cowboy hat on his head,

Soon gave all to know they had nothing to dread;

He spoke not a word, but went straight to his work,

And filled all the stockings; then turned with a  twerk,

And laying his finger aside of his nose,

And giving a nod, up the chimney he rose;

And away they all flew like a swift Space-X missile