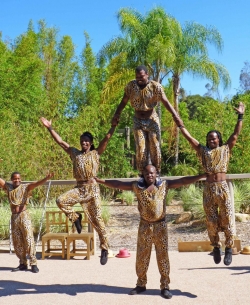 “We started in East Africa. We are all from the same village,” Konde Kalema, a member of the troupe, told East County Magazine. “We started when we were little, in school, watching Chinese acrobats and combining the Chinese arts with African traditions.”
A Kenyan agent discovered the team and invited them to join a tour and take their talents on the road. They are now traveling around the United States showcasing their amazing feats. Most recently, the Tanzanian acrobats competed on the NBC America’s Got Talent television program—advancing into a third round to be aired soon.
These talented performers staged a practice session during our visit. View a video of a tumbling stunt.   View a video of a human pyramid formation.
For more information on the San Diego Zoo Safari Park (formerly known as the San Diego Wild Animal Park), an 1,800 preserve operated by the nonprofit San Diego Zoo (www.sdzsafaripark.org)