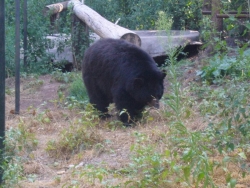 August 27, 2011 (Alpine) – Blossom and Delilah, two bears rescued from a closed zoo in Oklahoma have arrived at their new home at Lions, Tigers & Bears in Alpine.

The animals were destined to be sold to a game ranch where they could be hunted and killed if not for the intervention of Bobbi Brink, owner of LTB, a rescue facility in Alpine.

“Blossom enjoys playing in the water tub and Delilah is a sleeper. She is more kicked back and lazy…but she keeps a good eye on Blossom,” Brink reported in an email sent to LTB members and supporters. 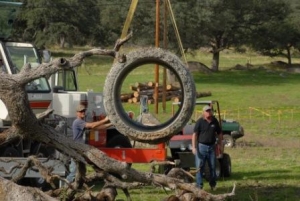 The bears are currently in quarantine cages to assure that they are healthy before introducing them into a brand new, spacious bear enclosure. The new space also now houses Liberty, a yearling black bear cub captured by officials after raiding a campground. Liberty was relocated to Lions, Tigers & Bears to spare the animal from being euthanized.

Crews are now putting finishing touches on the two-bedroom bear enclosure which will soon house the Oklahoma newcomers, as well as Liberty. 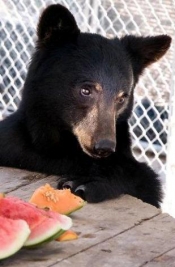 s hanging out in the middle of the construction with the guys. She is so funny—she des crazy things to get their attention when they are not paying enough attention to her,” Brink said of Liberty.

The two new arrivals were the last remaining animals at the Little River zoo in Norman, Oklahoma, that closed earlier this year due to financial problems. Brink observed, “Their diet was neglected as were the grounds where they were kept.”

Brink joined forces with the owner of Arbuckle Wilderness Park, an exotic animal facility, to assist in building special equipment moving the animals. A former employee of the Little River Zoo helped clear trees and brush with a chainsaw and axe to create a trail for the rescue crew to reach the bears’ enclosure. Brink’s father installed air conditioning in a trailer to keep the bears cool and comfortable during their cross-country trip.  She elicited sponsorship from Chevrolet for a truck to do the hauling and  Home Depot pitched in when repairs to the cooling system were needed.

The bears’ journey is chronicled in a series of videos; view the final video here: http://www.youtube.com/watch?v=laSfQIGlSaE&feature=youtu.be

For more information on Lions, Tigers and Bears, visit www.lionstigersandbears.org.