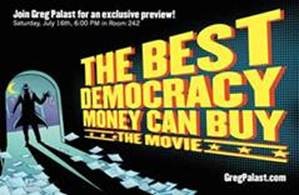 A portion of proceeds will benefit KNSJ radio.

The movie features Ed Asner, Rosario Dawson, Ice-T, Richard Belzer, Shailene Woodley and Willie Nelson.  Palast will be there along with special guests.  Reserve your Tickets.

The movie presents evidence that the Republican Party has created a computer program that could eliminate over 7 million minority votes in 30 states.

The film premiered in New York City on September 23rd at Cinepolis Chelsea. After every screening, the film has reportedly received a standing ovation.

Jesse Jackson is putting Rainbow/PUSH on as official sponsor of Greg Palast’s The Best Democracy Money Can Buy: a Tale of Billionaires and Bandits and for the first time ever, will screen the film in 200 African American Churches just prior to November 8th election day.

According to a press release: “The film exposes the theft-in-progress of the 2016 election via a racially-biased vote-purging program called Crosscheck. Released simultaneously, the film, DVD   and book of the same name will bring to harsh light the efforts to wrongfully purge 7.2 million registered voters from eligibility in November 2016. “

Palast contends that when Donald Trump says, "This election is rigged"—he should know.  His buddies are rigging it.

Rolling Stone investigative reporter Greg Palast is internationally known as the journalist who exposed Jeb Bush for stealing the 2000 election by purging black voters from Florida’s electoral rolls. Now Palast is back to take a deep dive into the latest dark operation, Crosscheck, which he contends is designed to steal votes by November.  Crosscheck is controlled by a Trump operative, Kris Kobach, Kansas Secretary of State.

Palast and his investigative side-kick Leni Badpenny do what it takes to get their hands on the data, analyze it and go find some of these 7.2 million Americans tagged “suspects” and “potential duplicate voters” whose votes are threatened this November. They hunt down and confront Kobach with the evidence of his "lynching by laptop."  Then they are off to find the billionaires behind this voting scam.

The Guardian newspaper has called Palast “the most important investigative reporter of our time—up there with Woodward and Bernstein.”

Salon.com reviewer Paul Rosenberg writes of the film, ”A wild and wooly ride, peppered with moments of wry sardonic humor that would make Dashiell Hammett smile.”

It' an amazing and a very authentic movie. Palast is really one of very few journalists who are seeking for truth. We definitely need more voices like his! The book was very well written, the movie is just stunning. Helen