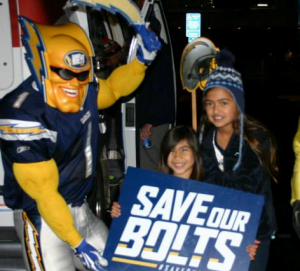 The Chargers pitched a plan for a shared $1.7 stadium  with the Raiders in Carson near Los Angeles on Monday at the Los Angeles Sports Council’s luncheon, after making the same presentation last week to NFL owners and commissioner Goodell.

But Jauregui notes in a notice sent to media, “NFL policy requires a team to negotiate in good faith before a franchise can relocate. The league and the Chargers have failed to do that and have rejected every effort to keep the team in San Diego.”

San Diego’s Mayor, City Council, Board of Supervisors and City Attorney have worked hard to produce a plan to approve and construct a new stadium on a short timetable, as the Chargers demanded, only to have the team continue moving forward on its Los Angeles plans, the Boltman observes.

Moving a team isn’t only a blow to fans; it also means lost revenues and jobs for the San Diego region. So the Boltman concludes,  “Unless the NFL and the Chargers come to the table for meaningful, good-faith negotiations on staying in San Diego County, we will launch an initiative to have the City retain a team of experienced sports antitrust lawyers starting with the law office of Weil, Gotshal  & Manges LLP to stop the move.”

In his notice to media sent on behalf of “loyal Charger fans,”   Jauregui concludes, “We fans stand ready to act if the illegal behavior is not stopped. Rest assured, we will not give up the Chargers without a fight!” 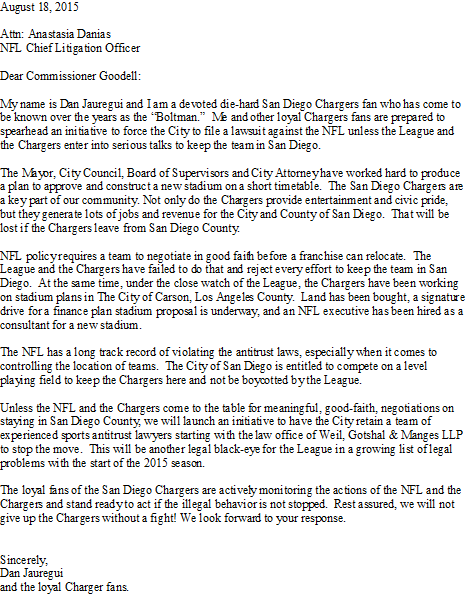 In May, the Citizens Stadium Advisory Group released a $1.1 billion proposal with the Chargers contributing $300 million and the taxpayers $800 million. The Chargers would get all their money back by taking 100 percent of the revenue from personal seat licenses and stadium naming rights, the taxpayers would not get any of their money back but they would have the opportunity to watch football games at a great distance for a hundred bucks a pop.
Thanks Miriam Raftery!! For this wonderful sports article!!First time knew about Boltman .Its interesting post. we are waiting for your next post..__ Video gaming stores in Columbus Ohio

Capitalist make money from nothing. The NFL makes money by sucking taxpayers dry. LET THEM GO!

the nfl is a taxpayer sucking crony capitalist bunch . they get taxpayer subsidies while the league grosses over $7 billion a year. the federal taxpayers pay for the security at the stupor bowl. let the nfl and ALL businesses pay their own way and not scam off the taxpayers. the hotel taxes people want to use would be better directed to solve real problems.

"...no club has an “entitlement” to relocate simply because it perceives an opportunity for enhanced club revenues in another location. . .Because League policy favors stable team-community relations, clubs are obligated to work diligently and in good faith to obtain and to maintain suitable stadium facilities in their home territories, and to operate in a manner that maximizes fan support in their current home community." http://www.leg.state.mn.us/webcontent/lrl/issues/FootballStadium/NFLFranchiseRelocationRules.pdf --Why isn't the present stadium "suitable" -- anybody know?