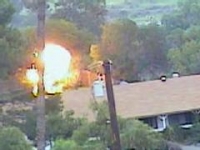 February 3, 2011 (Escondido) – San Diego Sheriff Bill Gore has released departmental expenses associated with the investigation of the “bomb house” at 1954 Via Scott in Escondido. Expenses for the investigation, which culminated in burning down the home filled with the largest stash of home-made explosives ever found on U.S. soil, cost taxpayers $541,242.

“We knew this was going to have a significant impact on our budget going into this operation,” commented Sheriff Gore. “We took every effort to minimize costs; for instance, we rotated deputies from various commands to reduce overtime, called in our Search/Rescue volunteers, and utilized our law enforcement partners when possible.”

The department has also submitted paperwork for potential reimbursement from the State of California, due to the declared emergency.

In addition to these costs, the homeowner has filed a lawsuit seeking reimbursement from the County for her lost property value.   Renter George Jakubec faces federal charges related to the weapons making as well as bank robberies.