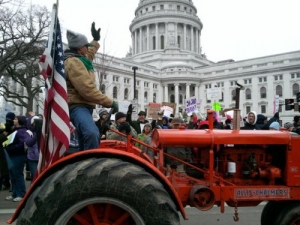 Supported by numerous organizations including labor and progressive groups, the rally organized by MoveOn.org looks to bring awareness to massive budget cuts taking place not only in Wisconsin and California, but nationwide.. Coordinators for the rally emphasize fear of the lean Republican budget in Congress, that in their eyes “threatens every American Family with slash and burn cruelty.”  Organizers have published the “10 Worst Things About the Republican Budget” at http://pol.moveon.org/soundthealarm/ to bring attention to cuts that would be hurtful to the poor, women, children, veterans, students, teachers and those with medical needs. Proposed deep cuts include programs ranging from Head Start/preschool education to cancer and Alzheimer’s research.

Republicans contend that steep budget cuts are necessary to close the budget gap in these recessionary times; they also seek to reduce the size of government. The GOP has opposed all efforts to boost revenues including tax increase for the wealthy, arguing that this could hinder job creation.

But critics of the GOP budget plans argue that slashing teachers’ jobs and benefits from public workers such as firefighters and police is the wrong way to balance a budget, and that less painful alternatives should be considered.

Education, health care, and social programs are among the hardest being hit during these tough financial times. These programs aide and assist the poor and lower-middle class, who are feeling the impact most of dire budgets.  Now many are saying enough is enough. 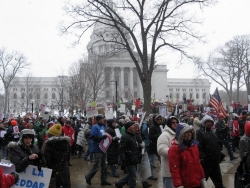 The rally will also give attendees a soapbox to voice their displeasure about the curtailment of worker’s rights that took place in Wisconsin this past month. Wisconsin’s governor with support of Republican legislators pushed through a bill to eliminate collective bargaining for benefits (though not wages). Democratic legislators, seeking to block the bill, left the state but Republicans removed funding from the bill in order to pass it without the need for Democratic votes.

The move sparked outrage among Wisconsin workers and supporters. Over the weekend, some 100,000 protesters flocked to Madison, the capitol, where a tractor brigade of farmers showed solidarity with other working people to welcome back returning Democrats. Recall election efforts have now been mounted against legislators on both sides of the aisle in Wisconsin.

As the drive to limit the power of the unions attempts to spread nationally, this rally and the others nationally will look to stifle that anti-union momentum. The working class will look to fight back against what they see as injustices that stripped them of their rights and privileges. They contend that the right to collective bargain enables workers to get a fair shake; with that right stripped away workers are left at the mercy of the rich and powerful.

Coordinators of the rally have signified this as a fight against the injustice of Republican leadership. They claim that, “The American dream and the American Workers are under attack.”