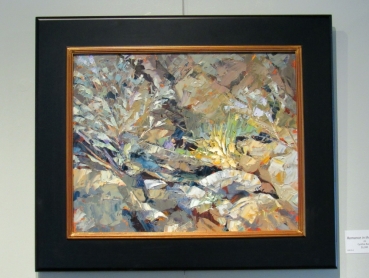 March 13, 2018 (Borrego Springs) -- “Plein Air” means fresh air–think outdoors-in French and many painters feel inspired when working outdoors in natural light surrounded by the splendors of nature. The Borrego Art Institute currently has an exhibit called, “Borrego Art Institute 12th Annual Plein Air Invitational.” This exhibit, which runs from March 5 to April 2, showcases the beauty of the desert. The curator is Shannon O’Dunn who owned an art gallery in downtown La Mesa before moving to Colorado.

The 15 “Plein Air” artists represented excel at capturing scenes of nature’s glory, each one in their own distinct way. They paint in watercolors, oil, or pastels. They hail from different places, such as California, Arizona, New Mexico, Utah, Nevada, Colorado, and even South Africa. However, the 147 paintings that are being shown at this exhibit were all done in and around Borrego Springs, from March 4th to March 9th.

As the curator of the exhibit, O’Dunn explains, “For this exhibit, all the artists painted their own interpretations of scenes in and around Borrego Springs. In the Borrego desert, they each found a personal view they wished to translate into a painting, and the starkness of desert light and shadow, plus the vegetation adapted to dry conditions, told a story the artists then tried to convey.”

On March 10th, the GALA Reception and Awards ceremony was held. South African Margaret Larlham won “Best in Show” for her picture, “Notations: Palo Verde Wash”. Larlham has lived in San Diego since 1986 and is a retired professor from San Diego State University. Juror Richard Lindenberg from Novato, Ca did the awards. He is the current marketing manager for Plein Air Magazine. Last year, O’Dunn was the juror. Larlham’s winning was a big coup for San Diego and artists who paint pastels because the competition was top notch. 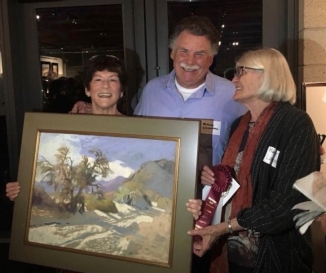 Colorado artist Jim Wodark, who now lives in Orange County, won second place. He has been an artist for over 20 years, and his love of painting goes back to his childhood. He particularly enjoys “Plein Air”. As he says, “Growing up in Colorado, it is hard not to love the outdoors”. 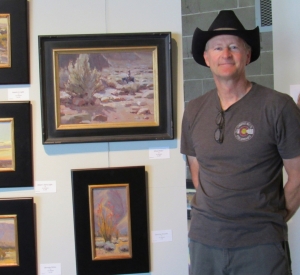 Photo, left:  Picture of Jim with some of his paintings. Photo by Mimi Pollack

All of the paintings were lovely to look at and some reminded me of the French impressionists. Each artist had a unique way with strokes, light, and their personal expressions of the outdoor scenery of the area.  This exhibit and the art institute are well worth the drive to Borrego Springs.