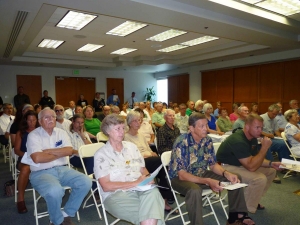 Numerous audience members testifed against the rate hike. None spoke in favor.

Board members also disagreed whether they should continue to increase the PAYGO fund by 5.5% per year as per previous policy, or whether to not increase PAYGO this year based on the fact that repair and replacement costs have been coming in significantly under budget in the current economy.

The District received 136 letters of written protest by the start of the meeting, and more were submitted during it.

One such letter from the Lemon Grove City Council, signed by Mayor Mary Sessom, cited the bad economy and requested the board “decrease the amount of the [rate stabilization] fund increase by 75%, which will allow some reduction in the proposed rate increase.” Additionally the letter “recommends that the District work to reduce its pension liability, which will reduce long-term operational costs.”

Members of the public likewise spoke about their economic hardships and what they perceived as excessive salaries and pensions at the District, as well as unfairness created by the three tier-structure, the danger of wildfires caused when landscape isn’t watered, and challenged the District to do more for water recycling.

Kathleen Raines said tier pricing is “very discriminatory against large families and large parcels like mine. My water use fell 33%, but my water bill increa 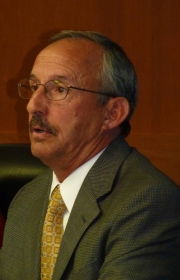 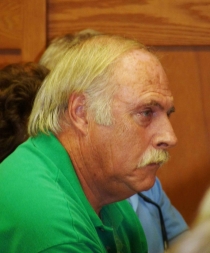 Dick Malsbary asked General Manager Mark Weston, “How much money do you make?” to which Weston replied, “I don’t think that’s appropriate.”

Audience members in the back shouted, “We do!” Malsbary continued, “In the last three years, executive pay has gone up,” and said of pay raise freeze for next year, "It's about time.”

He faulted the District for making delivery of affordable, quality water priority number nine, adding, “It should be number one. You folks have a trust element going on…I don’t trust you anymore…” He asked, “Are we buying every drop of water today that we can? If you’re not, it’s stupid. We ought to buy it this year and finance it,” noting finance rates would be less than the rate hike for wholesale water.

One woman testified angrily, “The La Mesa voters will vote you out. Enough is enough.”

Another man said two of the Board members fall into the category of subsidized rates, yet voted to shift burden to larger property owners. “To say it’s fair to charge large lot owners exorbitant amounts and subsidizing others is not fair," he argued.

Finally after being challenged on several occasions, Weston responded, “I’m the CEO of a $65 million business” and recited his educational degrees. “I think I’m paid fair. I get $199,000, a car and benefits. I’m not at all embarrassed by what I make or what I contribute.”

Board Chair Richard Smith opened Board deliberation by praising staff: “I am continuously impressed,” then stated that the rate increase is “sound and equitable and based on good business practices.”

Board member Deanna Verbeke thanked everyone for coming, noting, “I want to hear from everyone.” She praised the District next. “We are a good district, well run, the water tastes good. Water is relatively inexpensive when you think about your cable bills. Have you checked the cost of bottled water?” Nevertheless, she stated, “I would propose that we look again at the rate structure and put it on a future agenda,” and said the District will be looking at pensions and “there will be changes as far as I’m concerned.” 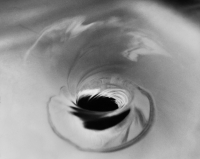 Board Member Kathleen Hedberg affirmed, “I cannot support a rate increase that supports a budget that I do not feel is acceptable…. We can do more with less.” She cited a study that showed that for every 10% rates increase, outdoor water use decreases by 7% and indoor use by 1%, therefore she questioned the accuracy of the numbers presented by staff based on a projected 5% increase in use.

Hedberg motioned to table the rate increase and take time to reevaluate the numbers, but her motion died for a lack of a second--leaving audience members drained.

Board Member Chuck Muse cited a 7% rate increase by SDGE, and announced that staff will be establishing water budgets for lots over a half acre. He criticized Hedberg, saying, “I was elected to be a policy maker, not to micromanage staff… I will trust staff.” 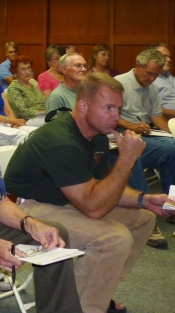 Muse motioned to approve the proposed rate increase and the motion passed, three for (Smith, Linden, Muse) and two against (Hedberg and Verbeke).

After the hearing, La Mesa resident Craig Maxwell described the hearing as “representative of the public’s perception of an ever widening gap between the public and private sphere…. They are thinking less and less of those they are supposed to represent.”

Good article, Kristin!--thank you.
In my (fruitless) attempt to convey the grave seriousness of the problem--i.e., obscenely generous pension plans--to the water district board members, I quoted California assemblyman Willy Brown:

"The deal used to be that civil servants were paid less than private sector workers in exchange for an understanding that they had job security for life. But we politicians—pushed by our friends in labor—gradually expanded pay and benefits . . . while keeping the job protections and layering on incredibly generous retirement packages. . . . [A]t some point, someone is going to have to get honest about the fact."

After I finished, I looked at them. "Now is your chance," I said. "You could be the ones who are honest about the facts." Will you do it?"

They looked at me (mostly) blankly; one smirked a little.

I knew then that the outcome--higher fees for rate-payers--was a foregone conclusion.

As I wrote earlier, even if the pensions form a relatively small portion of HWD's overall expenditures, they are still, as a public agency, obliged to put the interests of rate-payers--not employees!--first. The fact that they would take our money without first having done all they can to cut back on their own excess spending (i.e., bloated pensions) is unconscionable.

I have seen nothing wrong with the rate increase as long as they render a good service to the customers just like many ISP they charge much higher but they provide staisfactory T1 Internet Service in return.