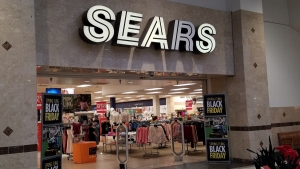 April 23, 2018 (El Cajon) -- An iconic mainstay of El Cajon retail shopping is closing with the sudden announced closing of the Sears store at Parkway Plaza.

The official announcement of the El Cajon store’s closing came earlier this week as part of the latest round of eight store closures by the wounded national retailer that plans to close 166 stores this year.

The other Sears stores closing in California are located at the Sunrise Mall in Citrus Heights, the Westfield Galleria in Roseville, and the Solano Town Center in Fairfield. Additional closures are in North Carolina, Nevada, Iowa, Illinois, and Texas. A business news portal, Business Insider, also reported this week that Sears and Kmart (also owned by Sears) would be closing in North Carolina, Ohio, Florida, and Massachusetts.

The 250,000 square foot El Cajon Sears store opened in 1969 as a free-standing anchor store on the west edge of the property. Shortly thereafter, it was joined with the rest of the mall which included May Company and a large Woolworths store. Another major anchor, JCPenney joined the mall later.

Many Sears stores have since been acquired by Seritage, a property development corporation and real estate investment trust (REIT) started by Sears CEO Eddie Lampert in 2015 in order to execute sale and lease-back agreements for 266 Sears and Kmart stores around the country.

As a result of the arrangement, the deal has allowed Sears to raise about $2.7 billion dollars to satisfy an enormous debt caused by weak sales. Another troubled retailer singing the retail blues, Macy’s, has closed many of its name brand stores and spun them into a REIT, repurposing them into other retail developments.

With the closing of the El Cajon store, the only remaining Sears stores in San Diego County will be in Chula Vista (Chula Vista Center), Carlsbad (Plaza Camino Real) and Escondido (North County Fair). In the past year, the Sears store in La Jolla at University Town Centre was also shuttered.

Sources have told ECM that the present plans are for the store’s liquidation sale to begin on Friday, April 27th.

Sally, a Sears El Cajon employee who did not want her last name disclosed said, “I’m really heartbroken about the closing of the store. I grew up in El Cajon with this store. I’m really sorry to see it going away.”

“We have one or two more big trucks coming to stock the store in the coming weeks, then it is all over,” said Mike, another sales associate. “Then the liquidation sale starts.” ECM observed that the store already seems to be ramping up for liquidation with significant discounts on clothing items throughout the store.

But if history is repeated, all may not be lost for El Cajon shoppers and the Parkway Plaza Mall which has courageously braced against the strong winds of current shopping trends, which have shoppers opting to engage in online internet shopping. Seritage has taken back active control of those stores being closed and has been known to triple rent payments by turning the former Sears spaces over to new hi 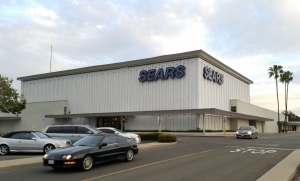 Carl E. Ball, Parkway Mall’s General Manager, found out the news on Thursday, April 12th. He declined to directly comment on the closure of the store and directed ECM’s inquiry to Seritage.

Parkway Plaza itself has also seen changes when its longtime owner, Westfield Properties, spun the mall off in 2013 to Chicago-based Starwood Retail Partners, which owns other malls and “lifestyle centers” throughout the United States.

A statement released by El Cajon City Manager Doug Wiliford indicates that the City of El Cajon was aware of Sears’ plans to downsize its Parkway Plaza store and had been “in conversations with city staff” regarding the likelihood of the store eventually closing, working with them regarding the redesign of the building for new commercial tenants.

“Initially, Sears indicated they intended on keeping a reduced sized store open and placing new tenants into the remainder square footage, however, this week we were notified that along with several other Sears throughout the country, they had decided to move ahead with the full closing of the store now,” Williford’s statement reads. “This is a part of the long-term process Sears has been engaged in for several years now to close all stores in the U.S. and replace them with new tenants on all the property owned by Sears.”  Williford adds, “The City of El Cajon has been proud to have been home to Sears since the 1960's and sad to see them go.  However, we very much look forward to having the opportunity to welcome new stores to our City in the near future.”

The impact of the closing of the Sears store is hard to determine because the City of El Cajon cannot disclose the amount of sales tax paid by Sears or Parkway Plaza. “We are not permitted to disclose sales tax from specific places like Parkway or Sears.  What I can say is that, in general, Parkway Plaza is the largest center for retail sales in El Cajon and Sears was, of course, a key part of that center,” Wiliford said. “Nevertheless, we do not believe that Parkway will be damaged by Sears closing given that we expect the entire building to fill up with new tenants in the near future.”

Wiliford also pointed out that “the mall” is owned by Starwood Capital, but Sears owns its own building and parking lot in front of the building. Therefore, the City actually deals with both of them as property owners at Parkway Plaza.

Yes, overall the economy in the US continues to be in trouble. Plenty of information to support that, and one can see it on a visual level locally. Good for you that your "20 year old company has never had it better", many others not so much. Economically overall is what I'm referring to, not just businesses. Extremely high rent is one glaring example of our economy suffering. A couple more the are outrageous costs for utilities and fuel. All which affect our economic lives.

Time to wake up and smell the coffee Gramps, the white hot economy is passing you by.
My 20 year old company has never had it better.

I work at the Regal in Parkway Plaza.  It'll be interesting to see what happens there, that's a huge space for another store.  Another food court and bring back Arby's maybe?  I miss those curly fries on my lunch break!

They will be missed. More people out of work, and thus the economy continues to decline and those directly affected will no doubt suffer as a consequence.