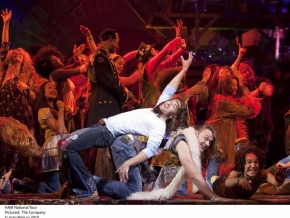 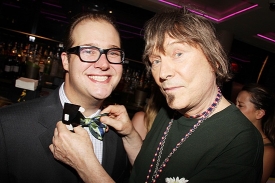 October 14, 2011 (Poway)--From October 18-23, the Tony Award Winning Musical HAIR will play at the San Diego Civic Center. HAIR follows a group of young pacifists during the Vietnam War era who advocate lifestyles of peace and acceptance within a society tied to darkness and intolerance. The musical features an outstanding cast including East County local and Poway High School alumni Josh Lamon in the role of Margaret Mead/Father/Tribe.

Lamon is thrilled to be performing in his hometown of San Diego. “It feels awesome to be back,” he told East County Magazine. “When I was in sixth grade, I performed in Gypsy at the San Diego Civic Theatre, and since this is our last stop for HAIR, I feel like I’ve gone full circle.”

Lamon’s interest in performing began at a young age. “Performing is all I’ve ever wanted to do. When I was younger, I forced my family to sit and watch while I played Muppets videos and acted out all the scenes along with the film. My mom also took me to plays at the San Diego Junior Theatre, which contributed to my love of performing.”

After graduating from Poway High School in 1999, Lamon attended University of the Arts in Philadelphia. After obtaining his degree and working in regional theatre for two years, he relocated to New York City, where he currently resides.

Before his work in HAIR, Lamon played Boq in the national tour of Wicked. “My work in Wicked was definitely a learning experience,” he said. “It was my first big job, and since Wicked is such a massive show with such a huge fan base, it’s hard to get really creative. It was an adjustment, but it was also fun.” 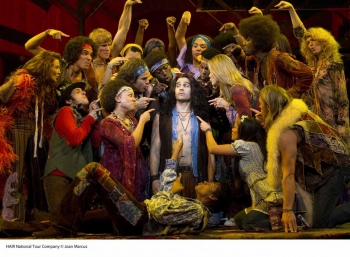 When Lamon discovered he had been cast in HAIR, he was ecstatic. “I was completely drained since I was working in New Jersey and going back to New York daily for callbacks. There were fifty people auditioning for five roles, about two or three of which were for men,” he recalled. “As a performer, you’re put through so much rejection that you learn to protect yourself. Simultaneously, you put your heart, soul and dreams into your work. When my agent called, I was prepared to hear that they wanted someone else. But they didn’t. It felt great!”

The show has some adult content including, "mature language, sexual content and simulated drug use. There is a dimly lit 20-second scene with nudity that is non-sexual in nature," according to the press release.

Tickets to see Josh Lamon in HAIR may be purchased at the Civic Theatre Ticket Office (1100 Third Avenue) Monday-Friday 10 a.m.- 6 p.m. or online at BroadwaySD.com. For more information, visit www.hairontour.com.