In a packed ballroom at the Holiday Inn on the Bay, State Senator Christine Kehoe  praised CPI for “shining a light” on truth with the organization’s research into issues such as poverty, wages and other issues impacting working people in San Diego County.  “We need CPI  more than ever,” she noted, adding “We have  a very large voice of corporations."

Clare Crawford, executive director of CPI, pointed out how technology is enabling workers to get their message out.

For example, after presidential candidate Mitt Romney was caught on video making disdainful comments about working people and the “47%” and stating to wealthy donors that “My job is not to worry about those people,”  La Jolla worker who picks up trash at Romney’s $12 million La Jolla mansion posted his own video on YouTube.  Hayes faulted Romney for calling for cuts in public service workers while not paying his fair share in taxes, and pointed out the heavy toll that garbage collection takes on workers’ health.

“The U-T attacked him on its front page,” said Crawford, then added with a smile, “The U-T’s weekly circulation is 240,000. Richard Hayes’ video has been seen by 1.5 million people.”

Crawford also cited the growing nationwide effort to organize Wal-Mart workers as an example of the power of “workers standing together to challenge the world’s largest retailer” including a planned nationwide walk-out on the Friday after Thanksgiving.  Locally, a leader in that effort has been Lorena Gonzalez, Secretary-Treasurer of the Imperial Counties Labor Council.

“Lorena Gonzalez was permanently banned from Walmart today,” Carpenter revealed.  Gonzalez received a letter from Walmart ordering her not to set foot in its stores after she walked into a College Grove Walmart with a letter asking the company to pay a living wage to its workers.

To draw attention to the plight of workers who don’t earn a living wage in San Diego, where the cost of living is high, Gonzalez attempted to live on $34 a week and wrote about her experiences on CPI’s website.  http://onlinecpi.org/2012/09/34dollarsaweek/ 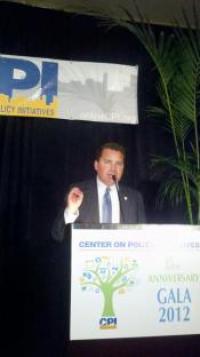 Among the honorees was San Diego Unified School Board member Richard Barrera, who fellow board member John Lee Evans praised for “visionary leadership.”

Despite severe budget cuts in the school District, Barrera has championed community-based reforms to raise graduation standards, improve the science curriculum, minimize teacher layoffs and keep class sizes low.  Student achievements are at record highs and literacy and science scores in the District’s schools are now among the highest among large urban districts.  Barrera also helped assure that any construction contracts in the district must provide good-paying jobs and family healthcare for workers and career training for residents in the district.

Gonzalez presented an award to San Diego “Dream Team” immigrant youths who successfully advocated for passage of the California DREAM Act, which makes college affordable by giving children of immigrant parents access to the same tuition and financial aid as other California youth.  Gonzalez praised the young people for their “bravery” adding that it took courage for the teens who “outed themselves” to stand up for all immigrants in the same situation.

CPI also honored college and vocational educators.  Educator Lupe Gonzalez emphasized why community colleges are important, since “our doors are open to everyone” but added that “with budget cuts we see those doors closing.”

She cited three disadvantaged students helped by community colleges locally.  One is a military veteran with Post-Traumatic Stress Syndrome who has been accepted into an English program at SDSU.  Another student is a first-generation American, daughter of immigrants, who was in remedial education initially.  She has now been accepted into a doctoral program at U.C. San Francisco. The third student, a homeless man, was living on campus eating garbage.  After receiving an education through a community college program, he has since been accepted on full scholarship at a local four-year university.

“These are the students who come to us,” said Lupe Gonzalez, who once picked cotton and today is a professor. She urged audience members to support Proposition 30 to assure education funding for community colleges.

That message was echoed by Senator Kehoe, who observed, “We once had a higher education system that was the envy of the United States.” Recent budget cuts have left colleges and universities struggling, as well as K-12 schools.  “Now we have a chance to turn our school funding back to where ist should be…and renew our support of public education,” the state legislator said, adding, “Education is the key to reviving and turning around our economy.”

Prop 30 is backed by Governor Brown and Democrats. Kehoe noted, “Republicans would not even vote to put a measure on the ballot.”  The initiative would raise income taxes on couples earning over $500,000 and individuals earning $250,000 or more a year, plus a quarter-of-a-percent increase in sales tax temporarily to fund public education and public safety.  If it fails, students can expect higher tuitions and larger class sizes, she added.

CPI's leader also urged a “no” vote on Prop 32, the so-called Paycheck Protection Act denounced by Crawford as a Wolf in sheep’s clothing to take away rights from working people and give power to corporations.”