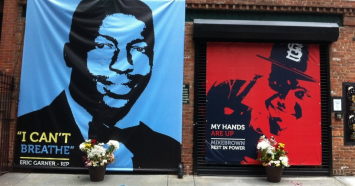 December 4, 2014 (San Diego)--For the second time in the past two weeks, a Grand Jury has failed to indict a white police officer for killing a black man.  The latest decision was in New York, where jurors declined to charge a police officer in the choking death of Eric Garner.

Unlike the now-famous case in Ferguson, Missouri where a Grand Jury acquitted a white police officer of shooting and killing an unarmed black man who some witnesses said had his hands up in a surrender position,  the case in New York was documented on videotape by a friend of Garner’s.

Yet jurors refused to prosecute the officer in New York, even though the video showed the officer using a chokehold to subdue Eric Garner,  who was accused of selling cigarettes without paying taxes, while several other officers surrounded him. The video shows Garner clearly stating “I can’t breathe” at least 11 times in a panicked voice before passing out.  A second video shows police standing by, making no effort to resuscitate Garner, before an ambulance arrived. The father of six, a large man who also suffered from asthma, was taken to a local hospital, where he died.

The Medical Examiner ruled Garner’s death a homicide caused by the choke hold, though the officer's attorney contended Garner's health conditions were the cause.  Garner’s neck had hemorrhaging as proof of the neck compression applied by the officer.

Choke holds are illegal for New York’s police department. The NYPD patrol guide states that this includes any pressure to the throat or windpipe which may prevent or hinder breathing.  The ban was put in place in 1993, after five officers were put on trial for killing a 21-year-old by asphyxiation, or strangling, San Diego Free Press reports. Four of those officers were acquitted.

Columbia  Law School professor Jeffrey Fagan concludes that the video “appears to show negligence.”  Cardoza School of Law professor Ekow Yankah agrees, KPBS reports, stating that “It is hard to understand how a jury doesn’t see any probable cause that a crime has been committed” when looking at that video.

After New York’s Grand Jury issued its decision, protests erupted in the streets of New York and in cities across the nation in what has come to be called the “Black Lives Matter” movement. In New York, protesters staged a “die in” in Grand  Central Station, blocked traffic on the Brooklyn Bridge and chanted “I can’t breathe” outside the Christmas tree lighting at Rockefeller Center.  Unlike in Ferguson, the New York protests were largely peaceful , with no rioting, only non-violent protests.

Reporting San Diego’s Nadin Abbott offered this analysis of why minorities, particularly in America, are rightfully mistrustful of the justice system in America.  “There is one word that comes to mind,” she writes. “This is the word impunity. It seems that there is nothing that can be said, or done, that will lead to the conviction of a white officer when a person of color dies.”

Yet another case making headlines involves a white police officer in Cleveland who recently shot and killed a 12-year-old boy with a toy gun. The caller who reported the boy in a park said the gun might be a toy. Yet the officer fatally shot the boy within two seconds of arriving and getting out of his patrol car, with no apparent provocation.

Attorney General Eric Holder says his office will conduct its own investigation of Garner’s death at the hands of Officer Daniel Pantaleo, who also faces an internal probe by the New York Police Department.

But as the Eric Garner case shows, not even videotape of what the medical examiner calls a homicide is enough to assure that a white police officer will stand trial when a black man is killed.  And even in the rare occasions when an officer is indicted, convictions seldom occur.  An officer typically need only state that he feared for his life to avoid prosecution or conviction.

Still, body cameras are seen by leaders of minority communities as a good starting point to holding police accountable when excessive force leads to a death.

Here in San Diego, black spiritual leaders including Bishop George McKinney and Pastor Brown have joined forces with Mark Arabo, a leader in the Iraqi Chaldean Christian community to help stop police injustices.  Today they announced plans to craft state and federal legislation that would require all police officers to wear body cameras, and to fly to Sacramento and Washington D.C. to lobby legislators on the issue.

In a press statement issued to media on Thursday, Arabo, who is spear-heading the effort states, “"The killing of Michael Brown, and the latest death of Eric Garner shows that something needs to change, and it needs to change now. I am combining the collective efforts of San Diego's spiritual leaders to show that we are unified in our need for collective action. This is because injustices like the ones we see today hurt all of us.  Its pain is colorblind,” Arabo concludes, adding, “Reform, like the implementation of body cameras should no longer be an option, but mandatory.”

Beyond body cameras, other potential reforms proposed by other groups range from changing laws so that police could not escape responsibility for killing someone merely by claiming to be afraid.  Improved training of officers and adding more minority officers to police forces across America, are additional steps that can be taken to help restore trust and accountability.

Until this occurs, expect the Black Lives Matter movement to grow in strength, as people of all races join together in calling for justice for victims of violence by police.

This is an excellent article, and there are many good articles/opinions out there since the result of this case, and the one in Ferguson. People around the world are watching and commenting about this same America who is trying to tell other countries how a democracy works. It seems quite ironic doesn't it because it seems to work for everyone else except black males. I think that with the various protests, and public outcry that change will eventually come, it may take a while but it's coming. I see that steps have been taken to equip some police officers with cameras (sure hope that proves worthwhile), then there is increase sensitivity training etc. As I said, it will take a while, what's also necessary is a re-training and re-educating of all police officers with regard to human lives, and to have them make an attempt to shoot at the foot if they have to, but not shoot with the intent to kill. All lives are valuable Jacqueline Carr Author A Selected Few Just For You.
Our police and judicial system are existing on a fault line. Lest an earthquake erupt it is time to make changes that will make a difference. The use of body cameras is a start. Police are necessary because there are criminals who hurt people. That does not give the police the right to behave like storm troopers. They have a sacred trust to protect and defend innocent people. If they cannot live with that ethic, it will sooner or later be imposed upon them. They do a difficult job and it takes a special person to do it right. It takes a man. Or woman. Change will come one way or another. We will either live in a police state under Marshall law or the changes Miriam mentions will be implemented to give us confidence that they care about us all. MJ Payne Author The Remembered Self: A Journey into the Heart of the Beast