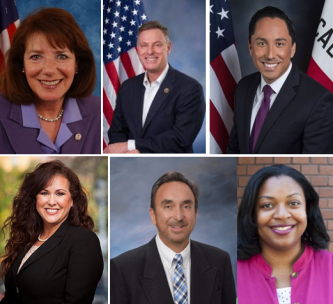 As part of this effort the La Mesa Foothills Democratic club, the epitome of the Democratic grass-roots, is hosting the panel of local political heavy-weights to share their inspiration and motivation for running.  Attendees will learn what enticed these well-known local politicians to jump in the race.

“The first step in changing this narrative is to find energetic, qualified candidates and to motivate them not solely by the negative messages of the current administration, but to share stories, experiences and anecdotes about what inspired some of our area's most notable politicians to run for public office in the first place,” a press release from the club states.

Congresswoman Susan Davis represents California's 53rd Congressional District in the U.S. House of Representatives.  Her political journey encompasses her experiences as a social worker, parent, youth mentor, and military spouse. Prior to Congress, Susan served in the California State Assembly (1994-2000) and on the San Diego Unified Board of Education (1983-1992).

Congressman Scott Peters serves California? s 52nd Congressional District.  Elected in 2012, Scott has worked across the aisle to fix a broken Congress and stand up for San Diego’s military and veterans community. Scott Peters currently serves on the House Energy and Commerce Committee and House Committee on Veterans’ Affairs.  After a 15-year career as an environmental lawyer, he was elected to the San Diego City Council, where he later became the City’s first City Council President. Scott also served as chairman of the San Diego Unified Port District.

Assemblywoman Lorena Gonzalez was elected in May of 2013 and is dedicated to fight for our state’s working and middle classes In 2015, The Atlantic Magazine labeled her “The California Democrat setting the National Agenda” for her practical, progressive legislation aimed at alleviating real issues in people’s lives.

Mark Gracyk Director Helix Water Board,  A U.S. Army Veteran, and newly elected Director of the Helix Water District representing Division 3.  As Chairman of the Prop W Oversight Committee, he worked with the Lemon Grove School District to oversee the completion of its beautiful new library.

Dr. Kyra Greene is the Executive Director of the Center on Policy Initiatives, a nonprofit research and action institute dedicated to creating economic prosperity, sustainable communities and a healthy environment for all. Before joining CPI, Dr. Greene was an Assistant Professor of Sociology at San Diego State University, an instructor in sociological courses on public policy at both Rider University and Stanford University, and the Diversity Coordinator for Enhancing Diversity in Graduate Education in the Social, Behavioral and Economic Sciences (EDGE-SBE) program at Stanford University.  Her past research has focused on social movement messaging/framing, legislative processes, and public policies affecting the lives of people of color and people with disabilities.

La Mesa Foothills Democratic Club, winner of the 2016 Club of the Year award, serves the communities of Allied Gardens, Del Cerro, San Carlos, the College Area, La Mesa, Santee, Mt. Helix, Casa de Oro, and other nearby East County areas.  Their meetings take place the first Wednesday of every month at the La Mesa Community Center, 4975 Memorial Dr. at University Ave., and are open to everyone.  They invite the public to “Come join the resistance!”

Meetings begin with a social ½ hour at 6:30 p.m. featuring snacks, salads, desserts, beverages and  progressive camaraderie, with the business meeting and program beginning at 7 p.m.  Meetings usually end about 8:30 p.m.  Half year memberships are now available for new members for as little as $15.00.  For more information you can visit their Facebook page or their website at www.lamesafoothillsdemocraticclub.com .