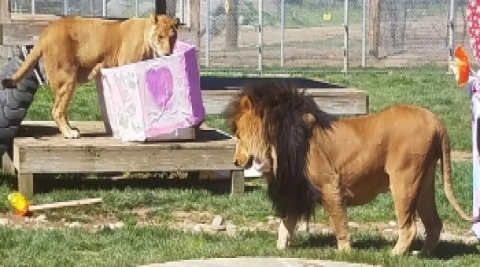 March 2, 2017 (Alpine) -- If a first responder does not already have Bobbi Brink, co-founder of Lions Tigers & Bears Exotic Animal Rescue Sanctuary in Alpine on speed dial they should consider it.  Why? Brink is accustomed to dealing with exotic animals and if a catastrophic event happens (flooding, wild fires plus).  Brink can show up and help handle the movement of that exotic animal.

You sure you know all the types of animals your neighbors’ have?  No tiger cub stashed in the basement or backyard?  Think again. Owning exotic big cats is illegal in California, but still allowed in some other states—and owners have been known to transport contraband critters across state lines.

“We work all over the states.  We work with first responders,” said Brink.  After all, not all cities have a zoo close enough to call for safe movement of lions, tigers and bears during an emergency. 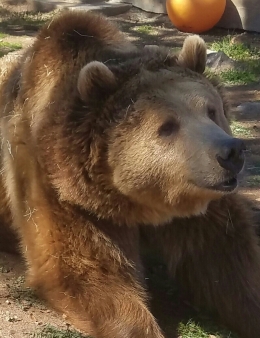 That stated, on March 3rd a birthday party was held for some of Brink’ beloved animals, a lion and two lionesses:  Bakari, Jillian, and Suri to be exact, complete with gift boxes with meat presents inside. Rest assured it did not take long for these big cats to find and eat their presents. The meat presents were made up of chicken, beef, a little pork and vitamin supplements.

According to Brink, Lions Tigers & Bears, on Martin Way off the Japatul Valley Road exit on Highway 8, was founded in 2002.  Alyssa Cantrell, a keeper, said the first bear was actually a mini-donkey named “Bear.”

“This was a cow pasture,” explained Brink of the now 93-acre sanctuary facility.  “We slowly rescued one animal at a time.” That sanctuary will soon include another pool and enclosure, currently under construction, to be opened in April 2017.

The sanctuary has grown to include lions, tigers, black bears, bobcats, a mountain lion, leopard, Himalayan black bears, a macaw, grizzly bears, chickens, sheep, goats, horses, llamas, a miniature donkey, peacocks, and a miniature horse. A white lion and two lionesses will be added soon. Volunteers help with all aspects of running this rescue home for neglected, abused, abandoned, and illegally kept exotic animals.  This is a no-breed sanctuary, where animals are treated with kindness and given as much space as possible to live out their lives.

Volunteer Sam Theodore, who works in safety and maintenance, added, “The lions going off” are part of the sounds to get used to when you work around these big cat--unlike getting used to the sound of copiers, keyboard typing, and phones going off in other instances.

The sanctuary offers memberships to help with the costs involved in running it. According to Brink they have 20,000 on their mailing lists. Adults are $38 for admission and $15 for kids. Donations are always welcome.

Brink knows the personal stories of the animals and can easily recount the conditions the exotic animals were saved from, be it neglect or being housed illegally.  Maverick, a tiger, came to the sanctuary after being taken away from a celebrity rapper.  Maverick’s story made the national news.

Maverick’s birthday party will be April 20th, another opportunity to watch an animal enjoy finding and opening their present.  In December a visitor can also watch more animals open their Christmas presents and there are multiple opportunities and events to attend.  Engaged couples can even tie the knot at the sanctuary.

If visitors wish to give the sanctuary a present and enjoy some unique entertainment, they can attend their biggest fundraiser held May 20th named “Casino Royale at the Ranch.”   The event will feature a catered meal, live music, casino games, a live silent auction, and entertainment.