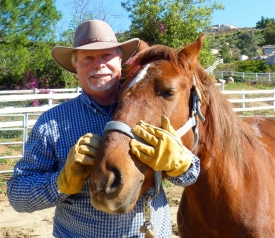 There comes a time in life when a person may decide to take a chance—to do something wild, so daring that it challenges the spirit and nurtures the soul.

September 3, 2011 (Blossom Valley) – When Dale Harker, a Vietnam combat veteran and cancer survivor, decided to train a wild mustang, friends thought he was crazy. “You old fool, don’t you know that horse is gonna kill you?” one roping expert told him.

But Harker defied the odds, relying on his faith—and training videos he found online—to gentle a wild horse that he obtained through the Bureau of Land Management. His amazing success was chronicled in a documentary, Mustang Man: How a Wild Horse Tamed a Vietnam Veteran. But his story doesn’t end there.

In an ECM Video special report, we reveal how Harker has now found a new calling in life, gentling wild mustangs for other East County residents.  View our video.

In our video, Harker recalls the anger, bitterness and pain that he felt after returning from Vietnam. “I was like a match,” he said. “You strike me the wrong way, and I’d explode.”

Harker headed to Vietnam as an engineer, with high hopes of doing “positive work” building things to help others. But he was soon forced into the infantry, serving in the TET offensive, an experience he describes as “horrific.”

But the low point came when Harker fell ill, and a close friend took his place one day. “He went out and got killed,” Harker recalled, his voice choked with emotion. “I had to unload his body off the chopper. I felt guilty….We were supposed to take care of each other and I wasn’t there.”  Though decorated for his courage, Harker insists, “I’m no hero.” 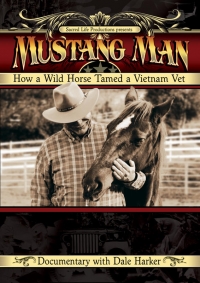 After coming home, Harker learned that he had developed an aggressive form of prostate cancer, a condition that he believes was caused by his exposure to Agent Orange, the defoliant used in Vietnam. He was given only weeks to live. But a decade later, he continues to thrive, leading doctors to call him a miracle man.

Indeed, Harker attributes his achievements to a higher power. “I kept asking God, `Why, why, why?’” he recalls of those dark days after his diagnosis. He began reading the Bible, seeking inspiration.

Then one day he spotted an ad in the yellow pages for a wild horse auction through the federal Bureau of Land Management, which thins the herds to prevent over-grazing and starvation.  Harker concluded that God was calling him to adopt a wild mustang that he named Duke. Harker is grateful to his wife for supporting his dream—even though at times the challenge seemed daunting. 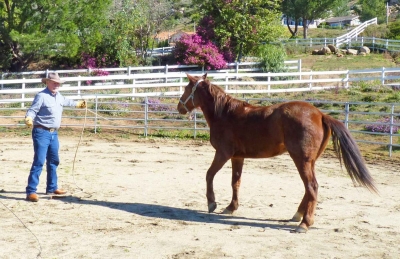 “The first two days, he was wild. I was afraid he’d kill me,” he admits. But slowly, with gentle means and boundless patience, he earned the trust of the wild horse—and in turn, came to tame his own hostile emotions. The story of how he attained this amazing feat may be viewed in the Mustang Man video, which can be purchased at http://www.sacredlife.com/sacred-life-productions/. But there’s much more to his story.

Harker has since gone on to use his self-taught, horse-whisperer-type skills to help others. Now he is working with several other wild horse owners here in East County. 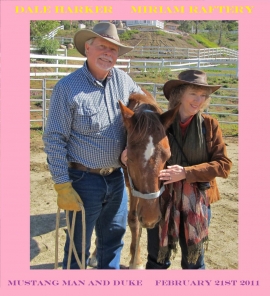 Harker’s work with newly arrived mustangs such as Zipper and Shelby, as well as his faithful companion, Duke. In addition, ECM editor Miriam Raftery sat down with Harker for an exclusive interview on his remarkable experiences in this ECM special video report:  https://www.facebook.com/LakesideCaliforniaHistory/videos/1389484353508/

Harker credits the Lord—and a once-wild horse—for helping him to find peace. East County’s Mustang man concludes, “God has given me back my life.”