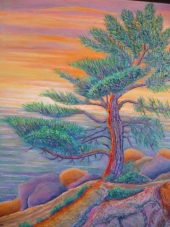 December 28, 2013 (San Diego) - The Mission Trails Regional Park Foundation (MTRP) is pleased to present an exhibition featuring seven award winning artists who work in various mediums.  The exhibit will be on display in the Mission Trails Regional Park Visitor Center Art Gallery from January 4 - 31, 2014.  The public is cordially invited to a reception in honor of the artists on Sunday, January 5, 2014 from 1:00 – 4:00 p.m.

Argento (Pat Silver) ~ Watercolor - As a native Californian, Pat has always been interested in the coastal landscape and the local color of the southern section of the state. With a master's degree from San Diego State University in Applied Arts, she pursued a career in design. Painting has always been an interest and is now Pat’s vocation.

James Berrian ~ Photography – James received a Zoology Bachelor of Science at San Diego State University in 1976 with an interest in herpetology. In the mid-1990s, he became interested in the local spider fauna. After retiring in 2008 from 23 years as a biology teacher, James expanded his work at the San Diego Natural History Museum in Balboa Park where he volunteered since 1976. James is now a Field Entomologist interested in the diversity and biogeography of the spiders and treehoppers of San Diego County and Baja California. His nature photography has been an important tool in his studies and teaching.  His photographs have appeared at the Del Mar Fair, Anza-Borrego Foundation shows, museum exhibits, and a few as models for the Common Spiders of North America.

Joyce Nash ~ Acrylic - After receiving her Bachelor of Fine Arts degree from Boston University, Joyce embarked on a career in art education and now devotes her time to creating art. She especially loves painting landscapes in her favorite medium of acrylics. Primarily a studio painter, she works from sketches, value and color studies, and photographs she takes on location. Joyce is a member of the La Jolla Art Association, San Diego Watercolor Society, and San Dieguito Art Guild. She exhibits regularly in the shows of these organizations and other shows throughout the county and has won several awards for her work.

Janet Nelson ~ Mixed Media – Janet began sewing with her grandmother in the 1950s. She became proficient with a sewing machine and needle and thread by sewing most of her own clothes, along with making quilts, embroidering, crocheting and learning most of the needle arts. She is primarily self-taught, learning from books, seminars, and trial and error. Her quilting has evolved from simple pieced designs to art and landscape quilts.

Janet currently works with her own nature photographs that she prints on fabric then quilts and further embellishes to bring out more of the detail of the image and provide a more dimensional effect. Her work has been exhibited at Mission Federal ArtWalk in 2012 and 2013 as well in several shows at the Spanish Village Art Center. She is currently a partner in Studio 3 at Spanish Village Art Center, Balboa Park, San Diego where she demonstrates her techniques, teaches, and displays her art.

Josie Rodriguez ~ Encaustic – Josie is a visual artist from San Diego. Her studio in Mission Hills fills with students wanting to learn the ancient technique of Encaustic. Not always a working artist she has backgrounds in Speech Therapy from SDSU and an M.A. in Pastoral Care and Counseling from USD. Josie has shown her work throughout the country but is most proud of having a solo exhibit at the San Diego International Airport and presently a solo exhibit at San Luis Obispo Museum of Art. She is represented by the Front Porch Gallery in Carlsbad and belongs to the International Encaustic Association and the Encaustic Art Institute in New Mexico. 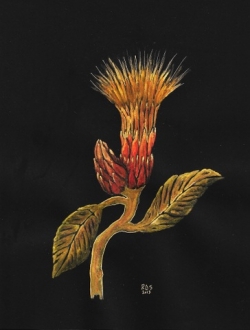 Roger Sorrell ~ Watercolor – Roger is a plant portraitist who aims to portray the dreams of plants: their spirituality, dynamism and inner character. He has a background in botany, art history, and botanical painting. For many years in Hawaii, Roger worked in a laboratory where he helped endangered native plant species from extinction. He uses vibrant watercolors and ink on black paper to portray plants and flowers in a manner that makes them come alive with inner luminescence and radiant drama. Sometimes his paintings allude to fine art styles of earlier historical periods such as art deco, Pre-Raphaelite, or Post-Impression in their ability to accent the drama and individuality of the plant species. To see Roger’s paintings is to take a journey through an enchanted floral world using an artistic lens to reveal its mysterious, magical beauty.

Stella Ting ~ Asian Brush Painting - Born in Macau, China, Stella immigrated to the United States in her early years. She has been intrigued with the art of Asian brush painting, even as a young child. Years later in her adulthood, she had the opportunity to start learning this beautiful art form.

Stella is passionate about her art works. She continues to strive towards embodying the concept of Zen Wisdom into her paintings. The flow of inner energy is applied as she pursues her creative journey through her artwork. Stella is a ten year graduate of Sensai Takashi Ijuchi.