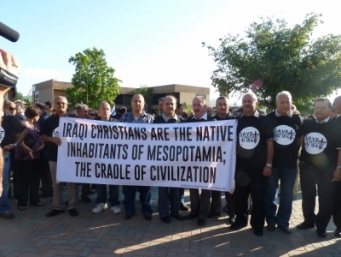 November 14, 2017 (El Cajon) -- Since ISIS defeat, and by the time the displaced Iraqi Christians have started to return to the towns and villages in the Nineveh Plains, they were forced to flee again as Iraqi and Kurdish forces clash. It's a shame that after our people started rebuilding their homes with the hope to start their life in peace after ISIS horror are now killed and displaced again by their own governments!

Our people have lost their faith in either Kurdistan or Iraqi governments to protect them. They see no future in their homeland and they are fleeing to neighboring countries looking for a safe refuge for their families.

Iraq is the land of the original Christians: the Chaldeans, Assyrians, and Syriacs. Iraqi Christians were the original architects of Mesopotamia, the cradle of civilization, before the Kurds and Arabs. Today, the Christian population of Iraq is down to about 200,000, a stunning 80 percent decline from the 1.5 million in 2003. Christianity is on the verge of being driven eliminated from its ancestral home.

We the Chaldeans, citizens of the United States of America ask our government to find a solution to protect the Iraqi Christians in their original land. Vice president Pence made a commitment few weeks ago that our government will interfere directly to protect Iraqi Christians and other minorities. We ask you, please take immediate action, not just talk to protect our people. There isn’t much left, before Christianity is vanished from Iraq

WHAT: The Chaldean League of California joined by the local Chaldean associations and supported by the Chaldean Diocese of St. Peter, are hosting a demonstration for peace and calling for an end to the Christian genocide in Iraq. They invite neighbors and friends to lend a voice to encourage the United States to find a solution to protect Iraqi Christians in their homeland.

The city of El Cajon is home to more than 40,000 Chaldeans, one of the largest Chaldean enclaves in the USA.