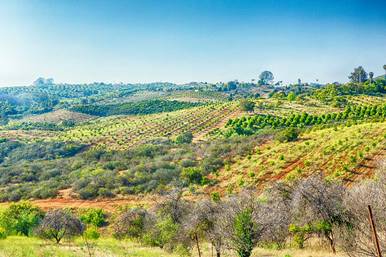 Initiative would require public vote on significant changes to General Plan, to protect backcountry from “sprawl-style development” and traffic gridlock

Update: Hear our interview with former Supervisor Pam Slater Price and Mark Jackson from Save Our San Diego Countryside by clicking the audio link.  Learn more at https://saveoursdcountryside.org/.

January 24, 201 (San Diego) -- Today the San Diego County Registrar of Voters approved the title and summary for the “Safeguard Our San Diego Countryside” Initiative, clearing the way for proponents to gather signatures to place the initiative on the November 2018 ballot. If passed, the measure would require voter approval of amendments to the San Diego County General Plan that significantly increase density on parcels in the unincorporated county now designated for farming, open space, and wildlife uses.

The measure exempts minor increases in density, properties within existing village or rural village boundaries, or changes to the plan required to implement state or federal housing law, including laws related to providing affordable housing.

San Diegans for Managed Growth, led by experienced conservation and land use advocates, is working to place the measure on the ballot.

“San Diego’s iconic countryside is rich in wildlife, and provides fresh, local food to San Diegans.  Protecting open space must be a priority for San Diego County,” noted Mark Jackson, Valley Center resident. “Unfortunately, the Board of Supervisors isn’t up to the task. That’s why we’re giving voters the chance to have their say when big developers attempt to build large housing developments where they simply don’t belong. Only the voters can ensure this heritage will be passed on to future generations.”

San Diego County adopted a broadly supported and community-based General Plan in 2011 after spending 13 years and $18.6 million on this successful effort. It sets appropriate densities for land in the unincorporated parts of the county. Per state law, the General Plan has zoned sufficient land for housing development to accommodate projected population growth. The plan identifies the best locations to build new housing units in and around existing village centers, where services like sewer, water and schools are already available.

Pam Slater-Price, former District Three County Supervisor, has endorsed the measure. “The General Plan balances all interests. The plan that emerged was well thought out. It reduces fire risk and plans for growth near services, leaving large swaths of open space for habitat, parks and agricultural uses. Because of the political power of development interests, we must now ask the voters to defend this excellent plan.”

According to Susan Baldwin, a former planner with SANDAG and expert on regional housing needs, “Large backcountry housing projects will not make housing more affordable to San Diego families. We need housing to be built in the right places – near transit and other public services. Building expensive, luxury homes in the middle of productive farm and ranch land will not help meet our housing needs in a meaningful way. These projects are contrary to the goals of the General Plan and will have a negative impact on the region's quality of life."

Despite the clear accommodation for necessary housing growth in the General Plan, a steady stream of developers continues to seek amendments to the plan to clear the way for massive, out-of-place housing developments in areas that are designated for agriculture, open space or rural communities. Examples of proposed developments that would require General Plan Amendments include Lilac Hills Ranch near Valley Center, Newland Sierra east of Vista, Harmony Grove South and Valiano, both south of Escondido, and Warner Ranch near Pala.

All of these proposed developments are located outside of existing village centers. Such poorly planned development would increase fire danger, clog roadways with traffic, and cause the loss of irreplaceable open space and agricultural land. Despite clear policy statements in the General Plan to avoid this type of sprawl development, the Board could approve nearly 8,000 additional housing units over the next year. What’s worse, the approvals would be granted absent any coordinated planning for transportation.

“Most San Diegans strongly support keeping the backcountry free of massive developments, as they demonstrated by overwhelmingly defeating Measure B (Lilac Hills) in 2016," said Philip Pryde, a past chair of the County Planning Commission. “This initiative will close the loophole whereby the Board of Supervisors can repeatedly amend the Plan to allow large nonconforming developments to occur without securing explicit public approval.”

Proponents of the “Safeguard Our San Diego Countryside” Initiative have until mid-May to gather 110,000 signatures from voters registered in San Diego County to succeed in placing the initiative on the ballot. Once the signatures gathered are certified by the County Registrar of Voters, the Board of Supervisors can either approve the measure directly or place it on the November ballot.