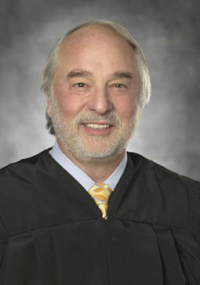 October 29, 2015 (Alpine) – For Alpine parents, it sounds like a Halloween horror story.  But it's an unexpected treat for the board majority at the Grossmont Union High School District.  Today, Superior Court Judge Joel Pressman (photo) issued a tentative ruling granting Grossmont 's motion to dismiss the lawsuit filed by Alpine parents and taxpayers.

The suit sought to  force the district to turn over funds to build an Alpine high school, which voters twice voted to approve in Propositions H and U. The board's action drew scrutiny from the County Grand Jury, which issued a scathing report titled "Fool us once, fool us twice?"

The tentative ruling comes as a shock since Judge Pressman  previously denied an attempt by Grossmont to dismiss the case and set a trial date for early December, as ECM reported. In his earlier ruling, the judge rejected Grossmont’s arguments that it did not have a contract commitment with Alpine to build a high school and that the text of Prop U did not compel the district to build the long-promised school.

The Court will hear oral arguments Friday morning, October 30, and Judge Pressman will then issue a final ruling, an email sent by Jeanette Liljestrom, executive assistant/clerk to the district’s governing board, states .  She adds, “If the Court affirms the Tentative Ruling tomorrow, we will have prevailed in our request to have the lawsuit dismissed.”

Trustee Priscilla Schreiber, who has consistently supported Alpine parents and opposed the actions of the GUHSD board majority, called the tentative ruling a “shocker.”

Schreiber voiced hope that the judge would  reconsider , noting in an e-mail sent to ECM, “Based on his reasoning in the first place to impose the injunction, he now uses that same argument as the bases to dismiss. It's just so surreal that he would find fault in his own argument in justifying the injunction. Why waste all this time and money if that argument is now baseless??? Alpine followed his lead only to find that they've been lead over a cliff.“

She added that the judge “basically states that the Board has Carte Blanche, which flies in the face of the safeguards and provisions outlined in Prop 39. So incredibly sad and wrong!”

I can understand the validity of the judges argument that they are not required to build a high school but this also ignores the intent of a proposition- that is to tax for an implied purpose. The only response to a refusal to a reasonable effort to follow the intent of a proposition is to refuse to vote for any more thefts of my money. I do not intend to vote for ANY propositions no matter how important for raising taxes to fund them based on this conclusion.