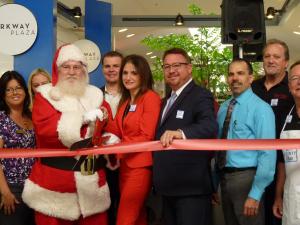 “We’re excited today to celebrate the idea of Shop East County,” said Eric Lund, Chamber president.  The average person spends $805 each sopping season on gifts, decorations and food, according to the National Retail Association – money that when spent locally creates sales tax revenues that can be used to fund police, firefighting and other things that benefit the people of East County. 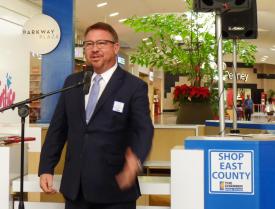 Mayor Wells praised the program as a “great idea” adding that his wife has already finished her holiday shopping – all from local merchants.  “Everything you want to buy, you can buy here in East County,” he added.

On November 28th, downtown El Cajon will celebrate “Holiday Lights on Main” including a large tree-lighting ceremony at 6 p.m. plus a skating rink, Santa’s Village, live music with Danielle Tucker and more.

“I think this will be a fun Christmas tradition that fits in with our commitment to a family focus,” Mayor Wells told East County Magazine, adding that the skating rink will be located at Prescott Promenade and the huge tree will be located in front of Starbucks and the Urbn St. Brewing Co. in downtown El Cajon.

The Mayor said the East County Performing Arts Center is on track to open next year, along with a Marriott hotel. 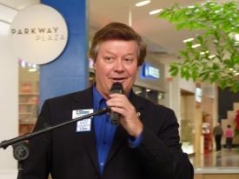 Lund noted that 17% of all retail income for stores for the year comes in during the holiday season, so shopping locally helps support and sustain local businesses, too.  The Chamber is giving away free “Shop East County” buttons for store employees and signs for shops to display in store windows.

Jill Kobe, general manager of Parkway Plaza, says, “We have 170 stores at Parkway Plaza that’s a healthy mix between national and local retailers,” under the mall’s new ownership by Starwood Retail Partners, which is investing 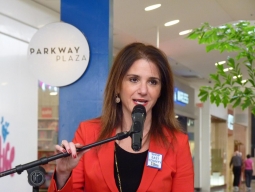 in major upgrades at the mall.  “Part of our success is we have a program to help local businesses develop,” added Kobe.

The specialty lease program allows local retailers to get a short-term lease, which takes some risk out of starting a new retail venture.  “It’s an economic gardening program for small businesses,” Kobe explains. 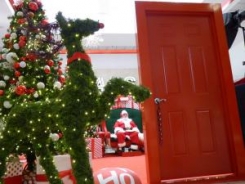 Santa has arrived at Parkway Plaza in a new Santa’s Village feature a special red door that children can walk through to meet Santa, with a topiary reindeer beside the entry and twinkling star decorations above.

Elsewhere in the mall, large Christmas trees are decorated and the carousel, featuring a menagerie of delightful animals, is all decked out in all new holiday décor.  There are also new wheeled animals for youngsters to ride in the mall. 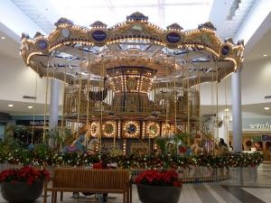 This weekend, those busy mall elves will be hard at work installing a brand new children’s play area, too—inspired in part by the whimsical works of Dr. Seuss.  The mall also plans a series of holiday concerts and more. 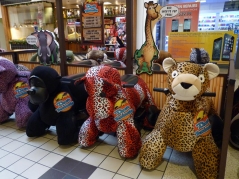 The day after Thanksgiving, known as "Black Friday", actually brings a lot of green to the local retail scene. Shoppers can save an average of 39.55% and boost sales for local businesses, since 30% of shoppers surveyed said they plan to spend $251 to $500 and 32 percent said they will spend over $500, according to BestBlackFriday.com.

Although last year's holiday spending was flat, Lund  revealed on a cheerier note, “Experts are predicting increased spending this year, so we thought it was important to launch this program to support our local businesses and educate consumers that they can meet virtually every holiday shopping need locally—specifically at local businesses east of I-15.  It’s all right here." 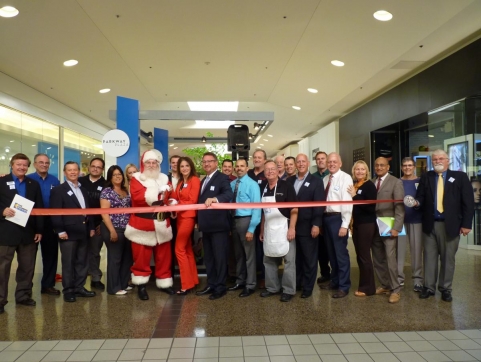