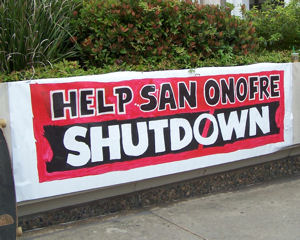 “Japan and Germany have decommissioned all their nuclear plants,” explained El Cajon resident Ray Lutz of Citizens Oversight Projects, who helped organize the demonstration in support of a network of protests throughout the state.  “We are at ground zero in the battle to halt nuclear powered electric generation plants because San Onofre is the perfect example of all that’s wrong with nuclear.”  He went on to trace the history of repairs and upgrades that led to the partial breakdown in January leading to the plant shut down that continues to this day.

By adding hundreds of fuel rods and larger generators, Sempra has squeezed every kilowatt of power it could from an aging, poorly designed plant built on the Rose Canyon earthquake fault line, critics contend.  A meltdown would endanger the lives of 8.1 million people.  Already, children in Fukushima Japan have symptoms of radiation poisoning sooner than public health officials predicted.
Chaplin Ron Flemish spoke at the rally, stating that he is no longer a “sleeping Presbyterian” but is now awake to the deadly danger of nuclear power.
Jackie Hanson whose home in East County is solar powered, made an impassioned plea to care for earth’s resources. 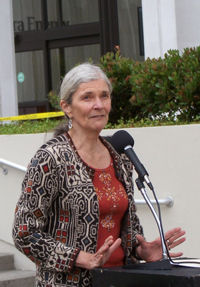 Speaking on behalf of the Alliance for Nuclear Responsibility (www.a4nr.org), Nancy Casady, owner of the OB People’s Market food coop, advocated for the safety of California citizens.
Illustrating the dangers posed by radiation, Martha Sullivan spoke emotionally about her brother, who worked on a nuclear submarine in the Navy and a nuclear plant afterwards.  He died of brain cancer from all the radiation exposure.  Sullivan worked for years at the California Public Utilities Commission.

Donald Felsinger never came down from his high tower.