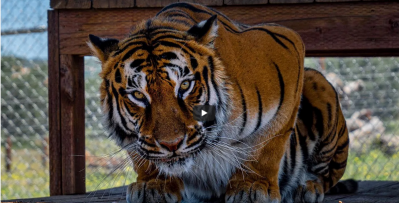 Bobbi Brink, founder of Lions, Tigers and Bears in Alpine, is among sanctuary founders highlighted in new video

November 14, 2021 (Alpine) -- More tigers are held in captivity across the U.S. than remain in the wild globally, estimates suggest. The Big Cat Sanctuary Alliance (BCSA) is a coalition of wildlife rescuers, reputable sanctuaries, and animal advocates working to eliminate the trade in “pet” wildcats and the commercial exploitation of exotic felines nationwide. Seeking to raise awareness about the plight of captive big cats held in inhumane conditions, the BCSA earlier this month released a new video titled Tiger Queens.

Tiger Queens features an in-depth discussion among women who have dedicated their lives and livelihoods to operating fully accredited sanctuaries that provide lifetime care to rescued tigers, lions, leopards and other wild felids been saved from cruel conditions. Moderated by Emily McCormack, a BCSA leader and animal care expert at Arkansas’ Turpentine Creek Wildlife Refuge (TCWR), Tiger Queens allows viewers to listen in on a candid discussion about the extraordinary commitment required to lead a true sanctuary and the steps that we can all take to help combat the exploitation of big cats in the U.S.

The “queens”—who operate sanctuaries in different states and at different scales—share an unwavering commitment to animal welfare. They include Tanya Smith (Cofounder & President at Turpentine Creek Wildlife Refuge in Arkansas), Bobbi Brink (Founder & Director at Lions Tigers and Bears in California); Lisa Stoner (Cofounder at Forest Animal Rescue in Florida), and Tammy Thies (Founder & Executive Director at The Wildcat Sanctuary in Minnesota).

“The poorly regulated trade in wild felines and prevalence of exploitative pseudo-sanctuaries across the U.S. leaves untold numbers of big cats abused and in desperate need of help,” said Carson Barylak, Campaigns Manager, International Fund for Animal Welfare (IFAW) the organization which helped organize and supported the creation of Tiger Queens in partnership with the BCSA. “Unfortunately, pop culture depictions of captive big cats—from “Tiger King” to the emergence of ‘tiger selfies’ across social media—have glamorized the exploitation of tigers and other felines and, in turn, perpetuated cruel and exploitative practices. It is critical that we consider what is really happening to these animals. The sanctuary leaders who share their expertise in Tiger Queens are uniquely qualified to educate all of us about making responsible, humane choices and supporting federal policy reform to protect captive big cats nationwide.”

The “queens” discuss the need for broad reform in the U.S., where both exploitative big cat displays and trade among private individuals are rampant. Keeping tigers, lions, and other exotic cats as “pets” fuels abusive trading and breeding practices while also creating serious public safety challenges. Demand for cubs to be used as photo props or for ‘pay-to-play’ sessions promotes speed-breeding and devastating, premature mother-cub separation, and causes enormous physical and psychological suffering to the animals involved. These big cats may be subjected to physical abuse to enforce compliant behavior and are often denied basic veterinary care, proper nutrition, opportunities to engage in natural behaviors and other basic needs.

With so many big cats held in captivity outside of legitimate zoos and sanctuaries across the U.S., the public and first responders are faced with unnecessary dangers including maulings, escapes and even deaths. In fact, October 2021 marked the ten-year anniversary of the devastating “Zanesville Massacre,” during which first responders were forced to kill dozens of dangerous big cats following their release from a private menagerie in eastern Ohio, shocking the nation and drawing international media attention.

“Risks for traumatic human injury or death are highest when big cats are kept as pets, used as props for photos, petted, or otherwise in direct contact with humans. Even when born in captivity these cats remain wild animals with their predatory instincts intact. A big cat can attack suddenly and without warning, with disastrous results,” said John Madigan, Chair of the Big Cat Sanctuary Alliance. “Tiger Queens underscores the serious danger that exotic cats pose to the public and the fact that it is never safe to be in direct contact with a big cat of any age, under any conditions.”

Proposed federal legislation known as the Big Cat Public Safety Act, endorsed by emergency responders and safety officials across the country, aims to put a stop to exploitative practices and protect the public from deadly encounters with wild cats.

The International Fund for Animal Welfare (IFAW) is a global non-profit helping animals and people thrive together. We are experts and everyday people, working across seas, oceans, and in more than 40 countries around the world. We rescue, rehabilitate, and release animals, and we restore and protect their natural habitats. The problems we’re up against are urgent and complicated. To solve them, we match fresh thinking with bold action. We partner with local communities, governments, non-governmental organizations, and businesses. Together, we pioneer new and innovative ways to help all species flourish. See how at ifaw.org.

About the Big Cat Sanctuary Alliance

Founded in 2017, the Big Cat Sanctuary Alliance (BCSA) brings together 16 professional captive wildlife sanctuaries and 8 partner organizations to advance the standards of care for wild cats in sanctuaries and to eliminate the private ownership and commercial exploitation of wild cats in the U.S. BCSA members are true sanctuaries – those that do not buy, sell, breed, trade, or exploit their animals for profit, and do not offer public contact with wild animals of any age. See a full list of our members at bigcatalliance.org.