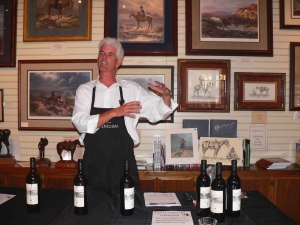 July 18, 2009 (El Cajon)—Over 200 people signed up for a “Taste of Wine & Art” event sponsored by the San Diego East County Chamber of Commerce. Held in conjunction with the Alley Cat Summer Fest, the tour featured samplings of appetizers and desserts, beers, tequila, live music and artwork displays at venues throughout downtown. The tour provided a rare opportunity to savor a variety of wines from East County’s burgeoning new wine-making industry; in fact nearly all of San Diego’s forty or so wineries and vineyards are located in our County’s eastern regions.

“I built the cellar right into the rock,” vintner Tim Peterson from Rock Canyon said, pouring cabernet vintages aged in both French and American oak barrels. The first was smooth and mellow, the second bolder and heartier. Labels bear an image of a mule with the slogan “We are stubborn about quality.” The symbol comes from the owners’ passion for equines. “We rescue mules and raise Andalusian horses,” Peterson added. His wines can be purchased online at http://www.rockcanyonvineyards.com/ or at a variety of shops and restaurants throughout San Diego listed at the vineyard's website.

Gloriosa is located one mile from the Mexican border in Campo. “Campo-most people think `That’s where your car breaks down,’” quipped George Toussaint. The advantage for winegrowing? Dry weather and high winds eliminate powdery mildew problems faced by vintners elsewhere, also eliminating the need for chemical pesticides or fungicides. The winery is run by a retired U.S. Forest Service employee, Mert Thomas, who strives “to make big, bold red wines,” Toussaint said. My favorite: the cabernet franc, a grape difficult to grow in some reasons but that thrives in Campo’s unique climate. Glorioso wines can be purchased at numerous local establishments and online at http://www.gloriosavineyards.com/. 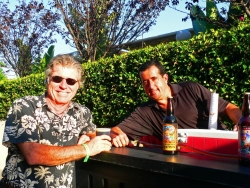 Guests sipped champagne at Glamour Girls boutique, while across the alley in the beer garden, German American Club members served up Dunkel beer and bratwurst sausages with spicy mustard.

At the Olaf Wieghorst Museum of Western Art, vintner Anthony Tiso from La Serenissima in Warner Springs poured samples of a variety of wines (photo, top of article). My favorite: a cabernet-sauvignon, though the cabernet franc was a close second. All are estate grown, meaning bottled from grapes grown at the winery.

“The big thing about my wines is they are unfiltered, sustainably grown and dry-farmed,” Tiso said. “The vines receive no water from September to May.” Situated at an elevation of 3,450 feet, La Serenissima has daytime temperatures in the 90s and night temperatures in the 60s, providing an advantage over Temecula, where extreme high temperatures would make dry farming , an Old World technique, impossible. Soils in Warner Springs include quartz and granite. “Our root system is deep and strong, and reflects the minerals in the soil,” Tiso said. “By dry farming Old World style, you get a stronger flavor.” His wines have won some gold medals in Temecula competitions. Started in 1999, the winery has no tasting room but can be ordered online at http://www.laserenissimavineyard.com/. 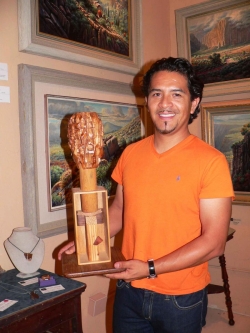 Silver Creek Fine Art & Custom Framing offered samplings of Navarre Correas and Silvercreek wines, which were pleasing though not locally grown, along with a tempting array of appetizers. The real treat here, however, is the artwork including paintings, sculptures and jewelry by talented East County artists. Carlos Castrejon is best known for his intricate Western bronze sculptures such as “A Signal”, which depicts a Blackfoot warrior and took 50 to 60 hours to create. But he recently crafted wooden jewelry an abstract carving titled Mascaras using monkeywood from the Philippines. “I wanted to capture in one sculpture the many different expressions a human goes through in a day,” he said of the latter (photo, left).

St. Madeleine Sophie’s Center, which featured a delightful display of juried artwork by local artists, offered appetizers including cheese, fruits, vegetables and hot appetizers plus wine tastings by PRP Wine International in Sorrento Valley. “We own 300 vineyards worldwide,” said Steven Scott Mitchell, pouring a delightfully refreshing Riesling. He added, “We do in-home winetastings if you bring ten or twelve friends.”

At Channel Twelve 25, the happening night spot which showcases local bands, co-owner Odie Goward was on hand to greet guests – a somewhat remarkable feat considering severe injuries she suffered in a three-story fall just a few months ago. “We have bands here as many nights as we can fill the bill,” she said, as guests grooved to the music of Ramzy Funk onstage. “We’re going to have some of the best bands in San Diego playing here on July 24,” Goward added.

The business plans to bring back a full academy soon, she said. “Our demographic is 12 to 25 year olds,” she noted, adding that Channel Twelve 25 has created jobs for students who learned skills such as videography and running sound boards.

The establishment normally does not serve liquor due to presence of minors. But during the wine-tasting walk, visitors savored vintages from Ivinglini Vineyard in Blossom Valley. The owner, former proprietor of Kip’s Café in El Cajon, learned skills by taking a wine class at El Cajon Community Center. “Next year, I’ll have a thousand bottles,” he said, pouring a rich petite syrah, “but I’m not selling any. I’m just doing this for fun.”