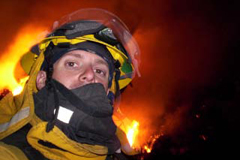 "Given the existing high-risk conditions that are projected to continue into the future, destructive firestorms will certainly occur again. Yet, even armed with this knowledge and after the Cedar Fire wake-up call, the San Diego region is woefully unprepared." - San Diego County Grand Jury, May 29, 2008

September 1, 2009 (East County)--October will mark the first anniversary of the Witch Creek Fires and fifth anniversary of the deadlier Cedar Fire.  Four years have passed since voters overwhelmingly approved Proposition "C" which called for a Countywide Fire Department.  Yet the County of San Diego is still at the nascent stage of organizing collective fire departments of the region into one unified command structure.

In August, the County Board of Supervisors voted unanimously to put a measure on the November ballot asking voters to approve a $52 increase in their annual property taxes—or $1 a week-- to fund such a unified fire command.  The measure would fund purchase of reserve fire engines, water bombers and other regional equipment.

On June 25, the Supervisors also voted unanimously to approve a consolidation of some of the County’s twenty-three separate fire departments, while boasting that they had spent $3 million from the County’s General Fund and Community Development Block Grant funds to purchase eight four-wheel drive fire engines. County Supervisors will spend $15.5 million dollars annually to bring additional resources and firefighters to more than 50 existing fire stations throughout the region, unifying twelve agencies to merge through a  three-phased process.

"Over half the County will be unified into a single, less-fractured, more efficient agency. This means stronger and better coordinated services in our rural areas. And, it brings us significantly closer to our eventual goal of creating a Countywide fire entity to serve the region," said Jacob, who also stated in a previous announcement that purchase of the new fire trucks represented "proof positive of the County’s aggressive efforts to make our region the best prepared it can be for fire and other disasters."

Yet county fire officials and residents have been hearing promises from politicians for the last five years about unifying the departments, only to see little or no action. In August 2005, a plan was put forward by the San Diego Local Agency Formation Commission (LAFCO) to begin the process of reorganizing the region’s fire protection. LAFCO issued a scathing report in February 2005 which labeled the county’s emergency preparedness organization "bewildering" and "short-sighted."

"In the absence of compelling cooperative agreements or inclusive organizational structure, the region’s 28 autonomous agencies exist in an environment that results in isolated policy decisions impacting the effectiveness of region-wide service," stated the 2005 LAFCO report. In their report, LAFCO said the region’s agencies had not developed a universal response criterion, had not provided a unified command or employed unified standards for training safety personnel, and were not able to "engage in strategic regional planning that could eliminate redundancies" and engender more effective use of resources.

"Because emergency services are divided among so many agencies—no single authority is accountable for creating and implementing a comprehensive vision for the region," stated the LAFCO report. "The determinations in this report underscore the fact that the region’s bewildering organization of un-served areas and redundant, under-funded public agencies did not evolve spontaneously; it was encouraged and given shape by short-sighted public policy choices that were adopted without a vision of how such decisions would impact public safety." 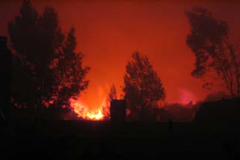 Fast forward three years later; the County Grand Jury report blasted the County’s continued lack of progress in creating what they term an "historically and currently failing" system to "provide the resources necessary to protect residents and visitors during significant firestorms."

"According to researchers, fire season has grown two months longer and destroys 6.5 times more land than in the 1970s," stated the Grand Jury. "In spite of Santa Ana conditions, insufficient rainfall, longer fire seasons and urban sprawl, the County remains without a unified fire protection agency and no central command. Assessments following the Cedar Fire and the Witch Creek/Guejito fire have consistently called for a better-organized and more responsive system in the unincorporated area where wildfire tends to originate."

During LAFCO’s 2005 study of the county’s fire preparedness, local fire department personnel severely criticized the Supervisors’ for their lack of commitment to fire protection.

San Marcos Fire Department Chief Larry Kinnard said the problem for county fire fighters was one of funding. He was joined by Lakeside Fire Chief Mark Baker, who also called for an increase in property tax revenues to pay for local fire services. Both men echoed blistering statements made by then-president of the San Diego Fire Chiefs Association Kevin Crawford, who in October 2004 said a chief culprit leading up to the lack of preparation for the Cedar Fire was "an atmosphere of inattention" on the part of the county towards the volunteer and smaller fire departments in San Diego’s backcountry. 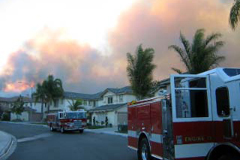 Officials and residents take stands for and against fire parcel tax

Under the plan voted on by the Supervisors on July 25, a "County Fire Warden" would take charge of all administrative responsibilities, while two "Fire Chiefs" would direct field operations. The plan calls for 12 agencies to merge in three phases, starting with six volunteer companies: Sunshine Summit, Intermountain, Ranchita, Shelter Valley, Ocotillo Wells and Dulzura. The Campo, Boulevard, San Pasqual and Mount Laguna fire agencies would be next to join while the Rural and Pine Valley fire protection districts would join in a final third phase. But as Jacob noted, the plan the Supervisors voted on must still be approved by LAFCO.

Lieutenant Governor John Garamendi told East County Magazine he believes voters should support the parcel tax measure.  “Every year it’s inevitable California faces some kind of natural disaster—fires, floods, or earthquakes,” he said.  “We have to be prepared, and that takes money to buy the equipment and hire the personnel to use it.  The parcel tax is a good way to spread the financial burden based on the risk factors in different areas of the state.”

The San Diego County Fire Chiefs Association also supports the regional agency and parcel tax, provided certain conditions are met including an appropriate level of representation on the new board for fire protection districts.  “Though it will not achieve our final goal, it is another step in the right direction,” said Mark Baker, president of the San Diego County Fire Districts Association and Fire Chief for the lakeside Fire Protection District, according to the Ramona Sentinel.

“They have no county-wide fire department, but they continue to build in the back country,” he said.  As a result, La Mesa and other local cities must send fire engines to fight wildfires outside city limits and pay to call up off-duty firefighters to staff city firehouses in case of local emergencies.

The County’s proposal for a $52-per-parcel fire assessment fee to create a Fire Authority would provide 13 new fire engines for the City of San Diego, but only six for the County--forcing cities to “subsidize the County for fire protection,” Allan added.  The County would put $15.1 million into this program.”  By contrast, the City of La Mesa’s spends nearly $8 million on its fire budget to protect just nine square miles. “The County’s priorities aren’t right,” Allan concluded.  “I definitely think they need to clean up their act.”

G. Boggs, a Ramona resident, noted that unincorporated areas would be largely unrepresented on the new Joint Powers Authority (JPA) board, since the 21 members would come mostly from cities within the County.  He also criticized the plan for failing to address prevention of wildfires.

Darrell Beck, a fire victim who lost his home in the Witch Creek fire, is running for the Ramona Municipal Water District, which also oversease fire and paramedics services.  He spoke against the parcel tax.  The Water District’s board voted to oppose the measure, as did the Deer Springs District and Valley Center District, he said.    “This proposed parcel tax is a cover-up by the Board of Supervisors to excuse themselves for being irresponsible managers of the hundreds of thousands of acres they have taken in the name of `saving the environment.’  He called for creation of fire-breaks through brush removal, controlled burning, or grazing to prevent fires from burning out of control.   He also called for reinstatement of prisoner programs to cut brush, shutting off power on red flag (high fire risk) days to avoid fires caused by downed power lines, and other measures.

For voters in November, however the burning question remains:  is a plan to buy more fire engines and consolidate firefighting agencies, however flawed or deficient, better than not funding any plan at all?

“We know what can occur in San Diego County in October, when the Santa Ana winds blow,” Supervisor Pam Slater-Price said, according to the Valley Center Roadrunner.  “But will the risk of having your home destroyed by an out-of-control fire be strong enough to convince people to tax themselves for the next 20 years?  We will wait and see.”

Even if voters approve the parcel tax assessment (which amounts to a little over $4 a month per property, or about the cost of a Starbucks latte) the plan would not take effect until July 2009.

Allan observed, “We could still have a fire this year.”

E.A. Barrera has been writing on politics, land use, arts and culture in San Diego since 1997. He has won six San Diego Press Club awards for Journalism in the last three years. He is a life-long resident of San Diego County. He is currently waiting for the Baltimore Orioles to break out of their 11-season slump and regain their former glory.

Yet county fire officials and residents have been hearing promises from politicians for the last five years about unifying the departments, only to see little or no action. In August 2005, a plan was put forward by the San Diego Local Agency Formation Commission (LAFCO) to begin the process of reorganizing the region’s fire protection. LAFCO issued a scathing report in February 2005 which labeled the county’s emergency preparedness organization "bewildering" and "short-sighted."
Reverse Phone Lookup

The braun corporation reminds me of this website. East County Magazine -- you entertain me on a daily basis!

Voluntier fire department may be the way. This is a common practice in rural parts of the UK. They go about their day jobs. Electrician, plumber or whatever they are and they are called up in case of a need. It works. They are paid some money but not a lot. refinance mortgage

There is some missing info on this issue.
It would seem to be unfair to some Owners to pay 52+ over the years that may have a small condo while an apartment complex of 300 units pays the same amount. How will Mobile Home Parks be rated? The "Commission" who is to "decide" where the money is to be spent is made up of Mayors & Fire Chiefs that will fill their pockets first with 50% of the take while the back country has no seat on the board and is outnumbered to get their needs covered. There needs to be more
landowners from the back areas if this passes. Will this new Tax be added to the Tax we already pay to Fire Districts or is this an added Tax for Fire so all the Cities
can shift the money now going to the Fire Dept. to finance the rest of the city's budget?

SDG&E and Cox are officially being blamed for power lines that caused several of last year's wildfires in East County. Check out yesterday's NY Times article for details:
http://www.nytimes.com/2008/09/04/us/04fires.html?partner=rssnyt&emc=rss

You can read more national breaking news headlines from the NY Times at the top left side of our site.

Newshounds can also find links to the month's top local headlines in other publications under the "East County Roundup" section on the right.